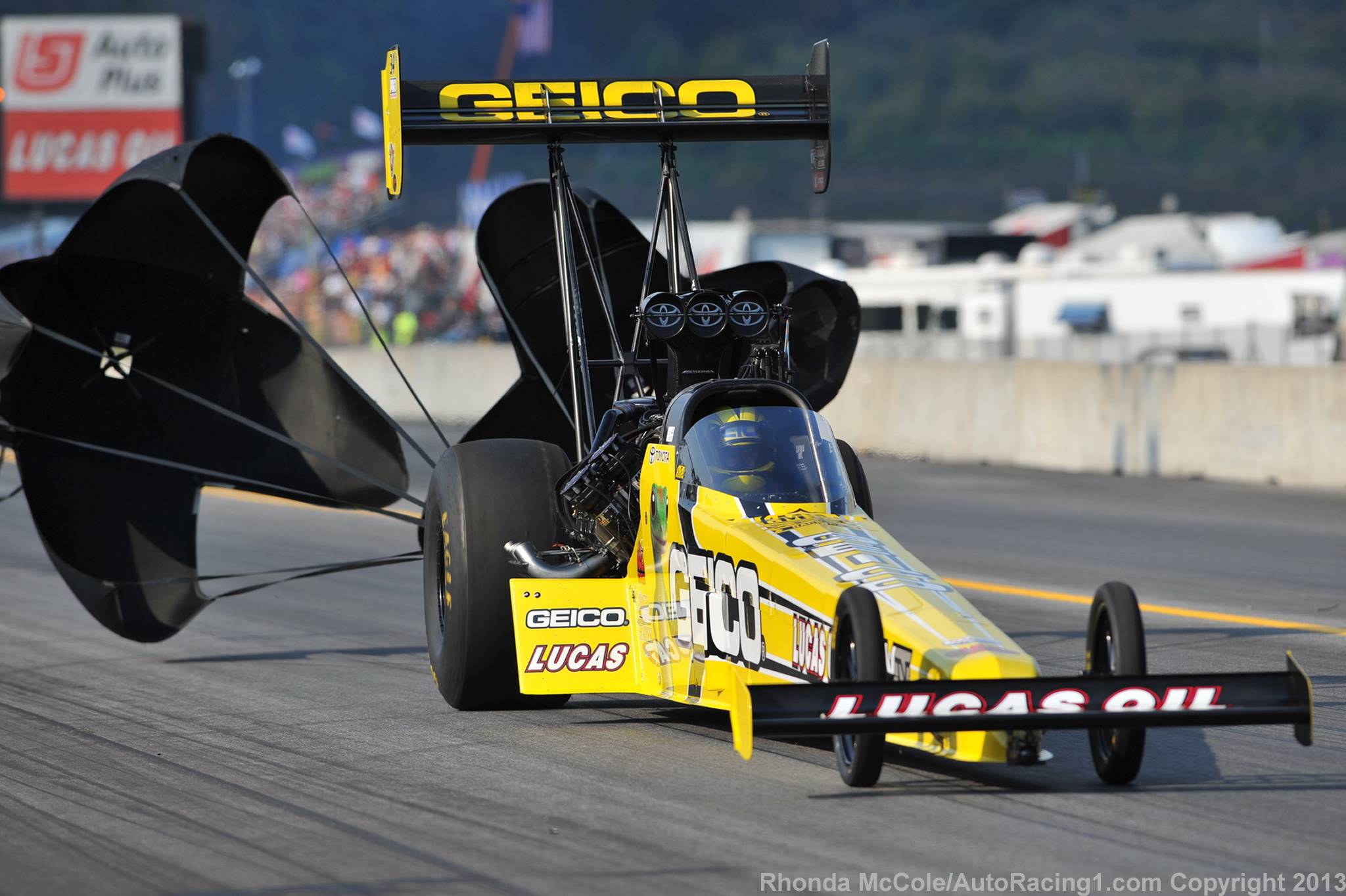 With just three races remaining in the Countdown for the Championship for the Mello Yello Drag Racing Series, it was all hands on deck as teams looked to score crucial points in qualifying and bonus points for track records, but despite the cool track temperatures the top spots remained unchanged from Friday in three of the four divisions.

In Funny Car, John Force scored his fourth top-qualifier position of the season and 144th of his career time of 3.987 seconds at 323.50 mph from Friday’s session that went unchallenged in Saturday, moving the 15-time champion into the points lead for the first time this season, leading Matt Hagan by five points.

Force, who had the fastest time Saturday’s qualifying session, will face Jeff Arend in the opening round of eliminations on Sunday.

“(Crew chief) Jimmy Prock swings for the fence and the guys are really working hard," Force said. “I’ve got a good racecar right now and what was exciting to me was to see the fans in the stands. It sure feels good to be running well. I struggled as a driver earlier in the year and my guys stayed by me."

Morgan Lucas retained the no.1 position in Top Fuel after his run of 3.772 at 314.90 mph in Friday’s second session held up the final two rounds on Saturday, earning Lucas his third top qualifier of the season and 11th of his career.

Lucas, who is currently fourth in points in the Top Fuel standings, has never made a final round appearance at Reading. He will go up against Sidnei Frigo in the first round.

“This track just continues to hold up to its reputation," Lucas said. “It’s a smooth track and it’s just an awesome racetrack. I’m just happy with going down the track four times, but I’m really happy with having the lowest time two of the four sessions. That’s a big deal for us."

Pro Stock qualifying saw the only top spot that changed hands during Saturday’s sessions, as Jason Line bumped Allen Johnson after posting a 6.573 at 210.70 mph in the opening round to just barely edge Johnson’s Friday pass of 6.579, 210.34.

The pole-winning effort was the second this season and 35th of his career for Line, who will be looking to score his third consecutive Reading victory when he meets Kenny Delco in the opening round on Sunday.

“This has always been a good Pro Stock track and we’ve had success here in the past," said Line. “It’s a big deal for us to be No. 1 and everything matters right now. I like coming up here and it’s a big deal to peak at this time of year. We’re putting in a lot of effort and hopefully we can have a big day (Sunday). We need a win."

Pro Stock Motorcycle saw Michael Ray atop the ladder for the third time this season as his qualifying effort from Friday’s session of 6.857 at 193.38 mph stood up through Saturday. With only 15 bikes entered for this weekend’s event, Ray will start with a free pass in Sunday’s eliminations.