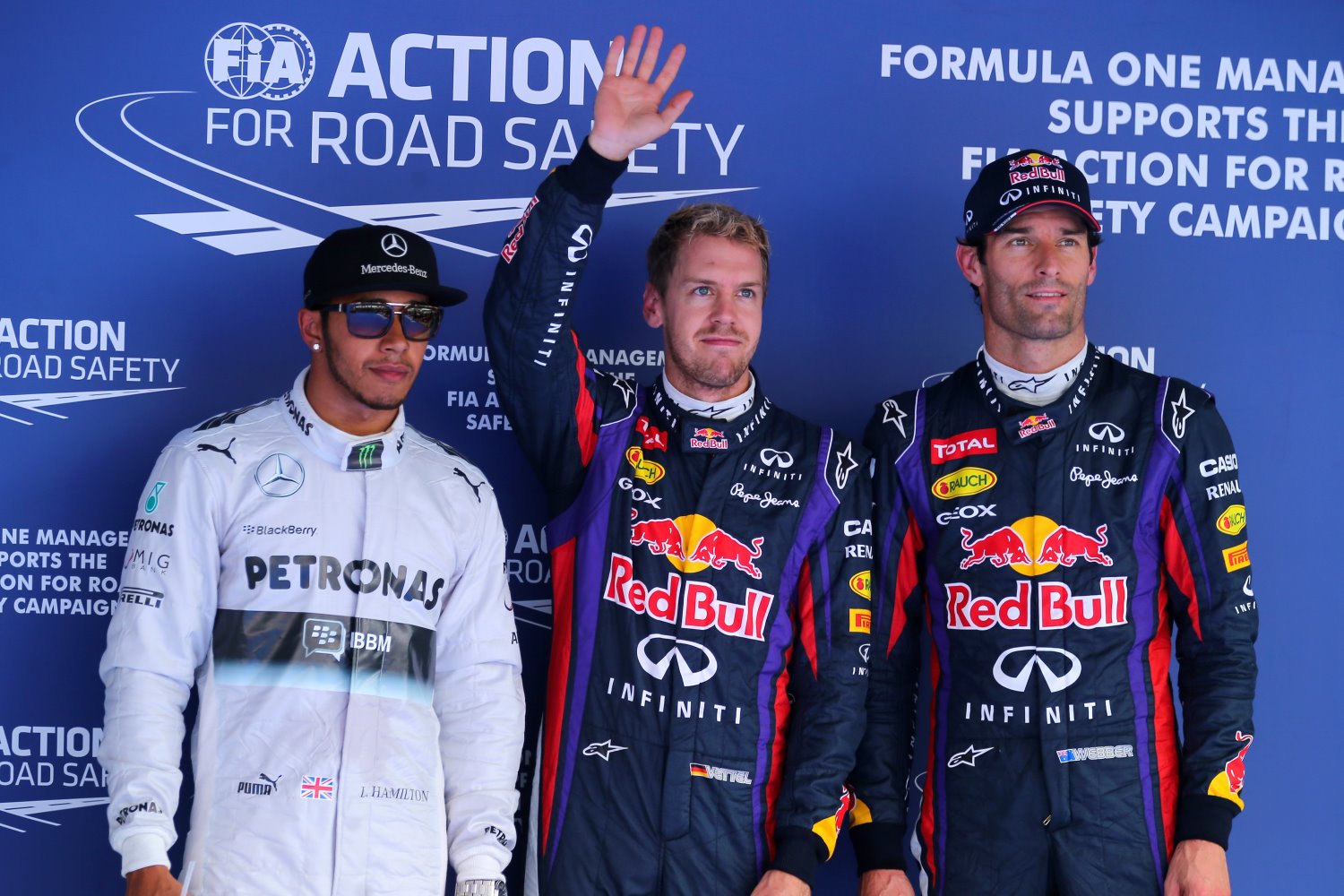 Q: Sebastian, you seemed to take this pole position more seriously than ever. Were you really under threat from Mercedes?

Sebastian VETTEL: Well, I think it was fairly close, as we could see, obviously. I had a very, very good lap in Q3, my first attempt. I knew that it will be tricky to beat that time – for myself. I tried again but obviously the second run I caught, I think Kimi, on the warm-up lap and then I was a little bit too close. We didn't have that much time in hand to drop back further, so not ideal but fortunately the first lap was good enough. I think, as expected, Mercedes was very strong. I think they feel pretty comfortable in the middle sector. So it's a tight battle, bit of a surprise this year we're pretty good in sector one, which is mostly straights, so the car is pretty good through those two corners that we have in the first sector and it seems that it's competitive down the straights which is always helpful – also for the race. It's the easiest part of the track to make up time. So in that regard I think we've got the balance right this weekend. Improved the car from yesterday. I wasn't entirely happy after the final practice yesterday so all in all we can be very happy with what we have achieved. So, that's why I was pretty happy after qualifying, to be honest.

Q: Lewis, yesterday you said you had the best Friday. Did you hope to be a little closer to Red Bull Racing, or even ahead of them?

Lewis HAMILTON: Well, we always hope – but we did as good a job as we could. I felt like I got the most out of the car and perhaps there's always a little bit of room to improve but in general it's been a good weekend so far, so I really hope that tomorrow we're able to fight with them y'know? We'll wait and see.

LH: There are threats all around y'know? But I'm looking forward. So we'll wait and see.

Q: Mark, what about you? A difficult qualifying for you in a way because you're thinking of where you're going to start. I noticed that your speed trap time was about 5km/h up on Sebastian's.

Mark WEBBER: Yeah, we had to take a bit of pace out of the car for quali. Not much but just looking at how we would compromise quali a little bit more for the race. Actually pretty happy with quali. I could be two positions further up but that means I'd be 11th instead of 13th with the penalty. It was a pretty tight quali, as Seb touched on with two Mercs, Seb and myself. It was a good little battle. I think the race will be interesting. Obviously well and truly out of position but we will fight and come back through.

Q: You said you were looking for improvements in the setup of the car in both long- and short-run pace as well. Did you get that today?

MW: Yeah, I think we certainly improved the car in some areas we wanted to focus on, compared to yesterday. But conditions were a bit different today as well – so you've also got to keep an eye on that. They're going to be even more different tomorrow, so the long run in P2 might not be too relevant in the race tomorrow but we've got all of our ducks lined up and worked out what we needed to work on for the race and we'll see how it pays off tomorrow.

Q: Sebastian, there is the possibility of rain tomorrow. Presumably you prefer a dry race though?

SV: Well, I don't really mind. It's not a disaster if it starts to rain. Same as usual we have rain tires in the garage but obviously they're talking about heavy wind. To be honest I arrived on Wednesday and it was very, very windy on Wednesday. Since then the wind seems to have died down and I think the typhoon has changed direction. I think tomorrow should be fine in terms of conditions – whether it is dry or wet. If we get some of the rain from the typhoon isn't 100 per cent clear at the moment but, as I said, it doesn't matter. Most important is that we did the job today and, yeah, looking forward to the race tomorrow.

Q: Sebastian, you seemed to have quite a lot to chat about in parc ferme at the end there…

SV: Yeah, just talking about the laps. I think it's a difficult lap. You obviously start with a lot of straights and then you've got all the corners at the end, so it's difficult to get the lap together, to get a clean lap in, many chances at the end to make small mistakes which lead into another and into another. Obviously Mark and I both aborted our last runs early so we were the first ones in parc ferme and had a bit of time in hand.

Q: Interesting DRS here in that you have two successive DRS zones; how much of a threat is that, do you feel?

SV: To be honest with you, it largely depends on tomorrow's conditions, the wind. I think we had a race two years ago where there was a massive head wind. It's a long straight from turn two down to the hairpin in turn three. Obviously it gives you flexibility to have the DRS zones right after each other, also on two quite long straights so we'll see. I think you can pick your corner but there's another straight after that where you could lose the position in case you gained it in the first place, so the same goes for turn one as it does for turn three.

Q: How pleased have you been with the car in the fast corners here, it is quite twisty?

SV: Yeah, pretty happy. Yesterday, I wasn't entirely happy, the car was good but I think we managed to improve it today and we seem to be able to go with the track which is usually the most important thing. The track ramped up throughout qualifying and I think we picked up pace and just went quicker. As I said, I was very happy with my first attempt in Q3. Unfortunately in the second attempt I ran into the back of Kimi, I think, but it was very tight. When I crossed the line, there wasn't that much time to drop back any further. That's how it goes sometimes but when you get it right around here it feels very nice.

Q: Lewis, how much are you looking at the successive DRS zone? Is that going to work in your favor if you hold position after the start?

LH: I don't know. Yeah, you've got the long straights; I really don't know what to expect tomorrow. I'm just going to be pushing as hard as I can to get past Sebastian and to put myself in the best position to fight. Hopefully long run pace is not so bad so let's hope that's the case tomorrow.

Q: That two tenths of a second margin between yourself and Sebastian; is that roughly what you expected? Are you happy or unhappy with that?

LH: I'm happy, I'm happy to here for sure. I'm happy that the car is as competitive as it is. The guys have done such a good job to put us up this high. I'm happy with the performance so far this weekend and I think there's more to come.

Q: And you've improved the car over the last couple of days?

LH: Yeah, fine tuning it. It's very difficult sometimes, you get to the limit and it's difficult to know what to do but just small tweaks here and there which have helped.

Q: Mark, we were talking about how you've taken pace off the car; is that pace in the corners and how does that affect the car?

MW: Well, we didn't set the car up to be super slow in qualifying but we had to keep an eye on the race so it's wing level, obviously (gear) ratios, a lot of little things which you try, to have a little bit more of a balanced view of the weekend because we know that I was going to be out of position. Irrespective of if I qualified on pole, I can't qualify on pole by ten places further ahead than pole because it doesn't exist, so I knew I was going to be out of position, and I had to factor some of that in so we have done. Yeah, you would like your cake and eat it obviously, have all the downforce on the car for sectors two and three and then have a super super top speed but that's not possible, in a Formula One car you need to compromise which we have and we'll come to it tomorrow.

Q: Has that changed the strategy as well?

Q: And just to clarify, does that give you a free choice of tires, because you're starting outside the top ten?

MW: No, it's a nice penalty actually! You have to start on what you qualified on as well. We'll do that and we'll see what we do with the strategy from there, but it might not be too different to everyone else. There's not many options here.

QUESTION FROM THE FLOOR

Q: (Abhishek Takle – Midday) Lewis, how crucial do you think it will be for your chances of victory tomorrow for you to get past Sebastian at the start, because they look pretty strong in the first sector and down the straights?

LH: Just from past experience, it's very difficult to overtake here so I anticipate it's… I'm going to need to try.