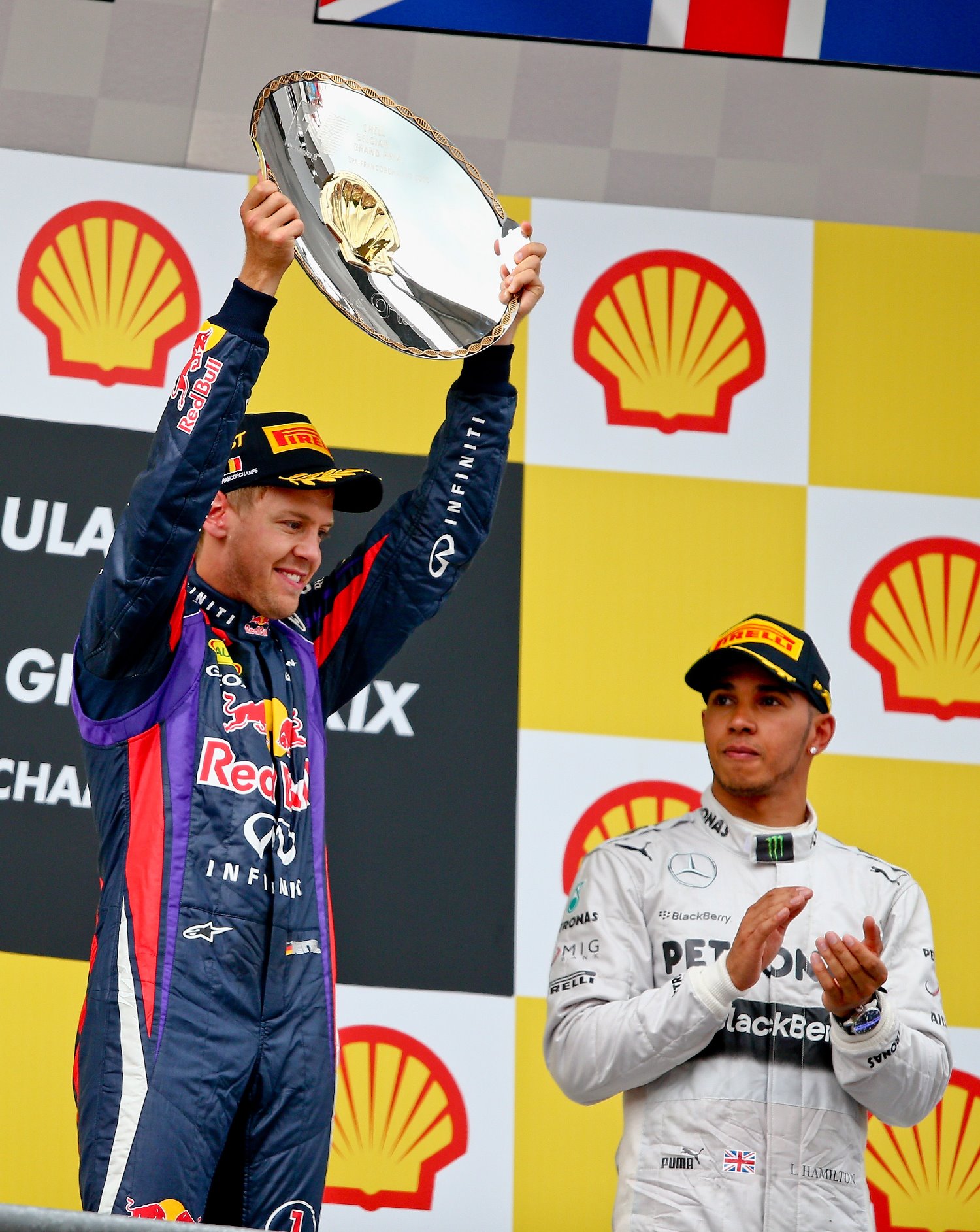 Sebastian Vettel took the lead from polesitter Lewis Hamilton about 1/3 through the first lap and pulled away to a dominating win in the Belgian Grand Prix at Spa.

Fernando Alonso was second in his Ferrari, 16.8 seconds behind, and polesitter Lewis Hamilton finished third in his Mercedes GP, 27.7 seconds behind the winner.

Fernando Alonso came from 9th on the grid to finish 2nd.

Vettel led every lap and set fastest race lap in a display of complete domination. He also led his 2,000th F1 lap in the process, reaching that mark at the youngest age in history.

“I don’t think we expected to be dominant here, and it surprised all of us actually; it's a great result. I think we knew going into the race that our race pace, compared to Mercedes, maybe gave us a little in hand, but we didn't know where we were compared to the others, especially Ferrari, and Lotus looked very quick in dry conditions also. It wasn't clear if the rain was going to come at the end of the race, so we kept pushing, but the gap we had by that stage meant we were able to control the race from there and the last couple of laps weren't too stressful."

The race started on a dry track as Hamilton led Vettel off the grid and into Turn 1.

Thru Eau Rouge Vettel put his Red Bull in a four wheel drift on the limit of adhesion.

He ran wide on exit but was still at 100% throttle on cold tires.

He carried so much speed thru Eau Rouge that he blew past Hamilton up the Kemmel straight to the top of the hill.

It was all over. Vettel led Hamilton by a massive 1.4 sec at end of lap 1. He was already out of reach of DRS activation.

Vettel pulled away to 3 second lead by lap 2.

Lap 5 his lead was four seconds. Vettel then throttled back to cruise mode.

In the greatest drivers track in the world, Vettel gave Hamilton a driving lesson he won't soon forget.

Raikkonen, who has a tendency to either win or retire in Belgium, was forced out of the grand prix on lap 26 when he ran off the track in his pursuit of Felipe Massa.

Trying to overtake the Ferrari driver at the Bus Stop chicane, Raikkonen instead went straight on and then straight into the pits after reporting "brake failure" over the radio.

The Lotus driver's DNF brought to an end his record of 27 grands prix inside the points and was also his first retirement since Germany 2009.

"Some days you run out of luck and today it was our turn," said the Finnish driver.

"I don't know if it was the brakes. It was not a problem until now but we need to check."

Raikkonen's first retirement since the 2009 German GP has dropped him to fourth in the Drivers' Championship where he trails Sebastian Vettel by 63 points.