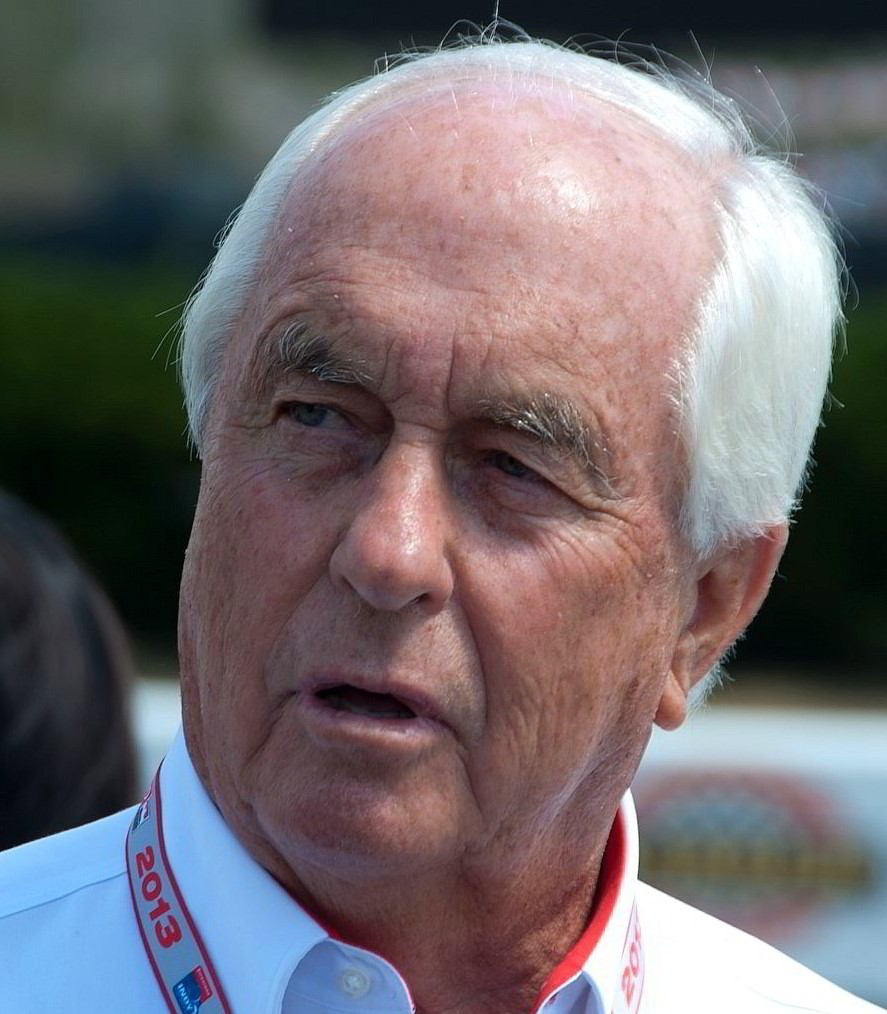 The NASCAR Sprint Cup race at the Michigan International Raceway and the NASCAR Nationwide Series race at the Mid Ohio Sports Car Course had a very major point in common: they both made NASCAR team owner Roger Penske, AKA "The Captain", break out in a great big smile. Penske drivers and cars won both of these races. There's was also more good news for the internationally known racing mogul regarding the potential status of his drivers and teams regarding a possible championship run in both series. It must all be good-the Captain's smiling.

THUMBS-UP. Penske Racing's Joey Logano had an excellent weekend at the Michigan International Speedway. It began on qualifying day when Logano won the Coors Light Pole after setting a new track record in his Shell-Pennzoil Ford. During the Pure Michigan 400, Logano was strong all day and led a race high 52 laps. He was in a prime position to take the lead for good, with three laps remaining, when race leader Mark Martin was forced to pit for fuel. Logano scored his first win of the season and third career win.

THUMBS-UP. The win placed Logano in a prominent position for a berth in the lineup for the 2013 Chase For The Championship. He's now 13th in the standings and only 17 points away from the coveted tenth position which would guarantee a Chase berth. The win also upgrades Logano's wild card status. He's only seven points behind Martin Truex JR who currently owns the second wild card entry into the Chase line up.

THUMBS-UP. Meanwhile in nearby Lexington-Ohio, the home of the Mid Ohio Sports Car Course, Penske driver A J Allmendinger was displaying his road racing skills in the NASCAR Nationwide Series' Nationwide Children's Hospital 200. The fact that a very late in the race yellow flag created a green-white-checker overtime run didn't bother Allmendinger in the least. He led a race high 73 of the 94 laps on the way to his second series win of the season. The event also marked the fourth win, in the last five series' races, for Penske's #22 Nationwide team.

THUMBS-UP. Sam Hornish JR, Penske Racing's primary driver in the NASCAR Nationwide Series, began the day at Mid Ohio second in the championship standings only three points behind Austin Dillon. Hornish finished a very strong third in this race while Dillon finished 21st. Hornish is now the series' new points leaders and left Mid Ohio with a 13 point lead over Elliott Sadler who moved into second in the standings. Dillon dropped from first to a tie for third in the rankings.

And that's why the Captain is smiling.

WHAT'S-UP. Mark Martin was looking strong in the final moments of the Michigan Cup race, in his Michael Waltrip Racing Toyota, and appeared to be on the way to the win. However, they were playing the fuel mileage gamble. Crew Chief Rodney Childers told his driver that they were somewhere between two and three laps short of having enough fuel to finish the race. They were stacking their poker chips on one more yellow flag prior to the race's end. The slower paced caution laps would have possibly allowed them to conserve enough fuel to win the race. Unfortunately, the team lost the gamble and Martin was forced to come to pit road for fuel with three laps remaining in the race. He had to settle for a 27th place finish.

THUMBS-UP. Despite the missed opportunity to win the race, Martin was all smiles in the garage and, during a live television interview, praised his crew chief and team for a great effort. He also noted that it was a genuine pleasure to drive the #55 Toyota for Michael Waltrip Racing and Aarons stores. This man is a class act.

WHAT'S-UP. Can you believe Clint Bowyer losing his car, spinning out and backing into the wall with only three laps on the scoreboard?

THUMBS-UP. Bowyer and his team wins this week's award for making chicken salad out of chicken do do. The team maintained their focus, despite the nerve shattering early race crash, and the driver climbed onto the steering wheel and drove that Michael Waltrip Racing Toyota to a fifth place finish.

WHAT'S-UP. There were three yellow caution flags in this races, for wrecks, within the first 14 laps. Seriously? Three crashes in that short period of time? Fortunately, the drivers found a way to settle down and they made it all the way to lap 72 before the next yellow flag flew.

WHAT'S-UP. The Michigan weekend wasn't anywhere near what Hendrick Motorsports was hoping for. After setting the third fastest time on qualifying day, pre race favorite Jimmie Johnson crashed his primary car during a practice session and the team and to roll out a backup car. That meant Johnson's third place starting berth was now 41st place. Johnson drove hard and worked his way to the front and even led three laps of the event before his engine expired, something rather rare for Hendrick Motorsports. He wound up finishing 40th in the race.

WHAT'S-UP. Dale Earnhardt Jr was strong at Michigan and looked like it was his day to return to victory lane. It all fell apart on lap 174 when a cut right front tire sent him hard into the turn four wall and a disappointing 36th place finish. It also dropped him from fifth to seventh in the points standings. There were reports that Earnhardt's massive fan club, AKA "the Junior Nation" experienced upper respiratory difficulties.

WHAT'S-UP. The lady of my house, forever the T shirt wearing, card carrying, member of the "Junior Nation," screamed obscenities at our television following Junior's wreck. She scared the hell out of Jo-Jo the cat.

WHAT'S-UP. Jeff Gordon was another Hendrick driver who left Michigan disappointed following his lack luster 17th place finish. With only three races remaining before the line up for the 2013 Chase is set, Gordon is 14th in the standings, 26 points away from 10th place which will guarantee a Chase Berth. He's also still seeking his first win which could help towards earning a wild card berth in the Chase. It appears that he will have to stage another nail biting, hail Mary, performance, similar to last year, if he's going to have a shot at earning that fifth NASCAR title this year.

THUMBS-UP. Kasey Kahne's seventh place finish was the only reason Mr. Hendrick had to smile about during the Michigan weekend.

WHAT'S-UP. The news wasn't much better for the teams from Joe Gibbs Racing. On lap 158, pre race favorite Kyle Busch slammed into the turn two wall which led to a 31st place finish. Denny Hamlin has to settle for a 20th place finish while Matt Kenseth came in 15th. Michigan was clearly the wrong place for NASCAR Sprint Cup hot shoes.

THUMBS-UP. The final comment involves a comment from the always fun Brad Keselowski. On Saturday morning, a practice session was scheduled by NASCAR that began at 830am. Keselowski commented on all of the fans camping out in the speedway infield, while noting that he was also from Michigan, and said he was well aware of how intense a Michigan Speedway party can get. Then, with a smile on his face, he said he felt bad about having to wake them up.

WHAT'S-UP. Beyond the questionable concept of a practice session that early in the morning, there was also the problem with early morning haze that made it virtually impossible for the spotters to clearly see their cars going down the backstretch.

THUMBS-UP. There were "Left Coast" NASCAR fans who got up at 530am, pacific standard time, to watch this practice session on television. Now that's dedication.