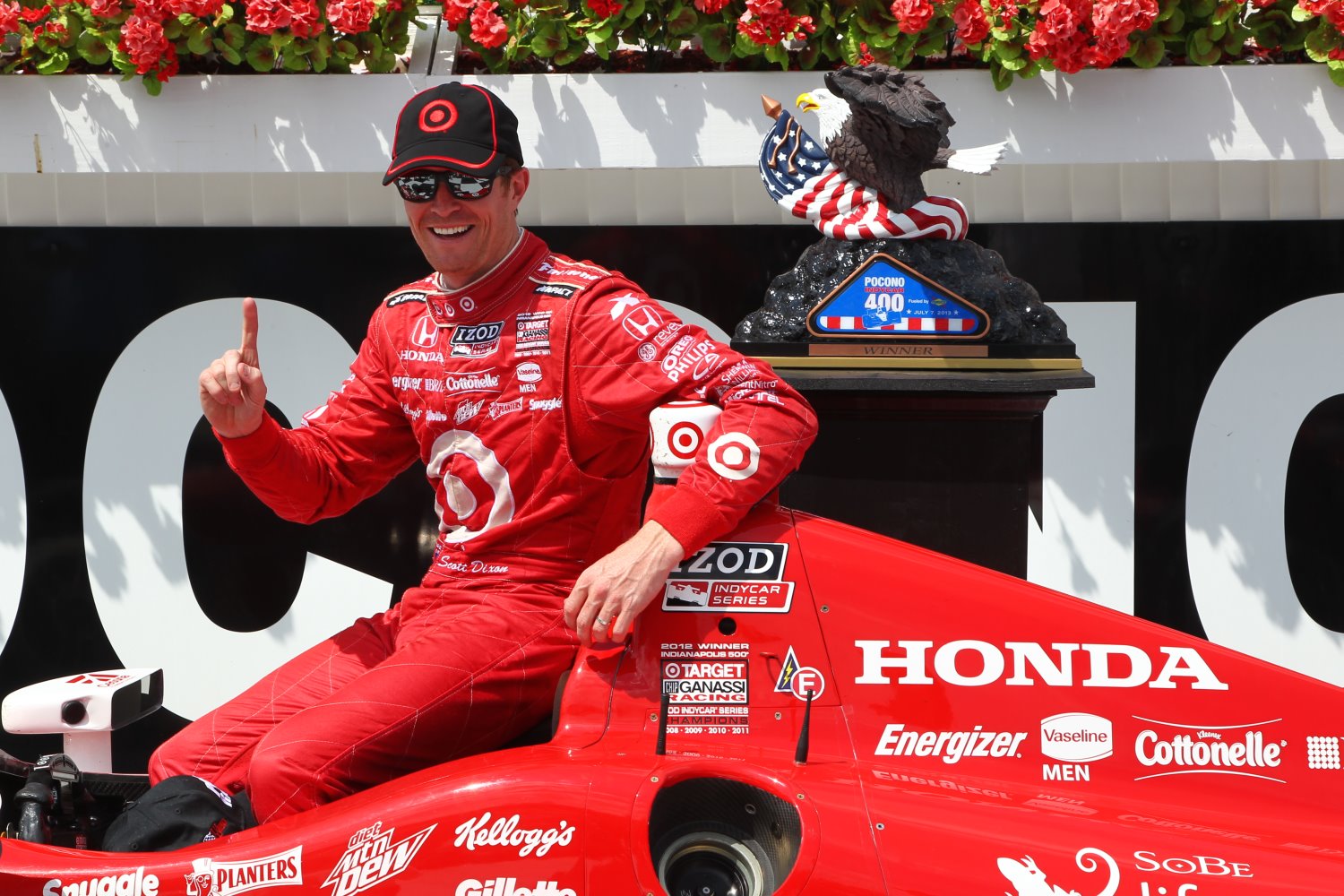 I had the pleasure this morning of speaking with two-time IndyCar Series Champion and 2008 Indianapolis 500 winner Scott Dixon via phone. The driver of the #9 Target Chip Ganassi Racing Honda is currently in England visiting wife Emma’s family. Nevertheless, Dixon who sits second in the Izod IndyCar Series standings, trailing Team Penske’s Helio Castroneves by 33 points took a few minutes to share his views on a variety of topics.

I asked Dixon about was his weekend at Mid-Ohio where he started third and finished 8th. This question was somewhat conversational. However, noting that he was on the two-stop strategy and saving fuel early, I asked him about the race. He pointed out….

"The pace of [Ryan] Hunter-Reay and [Will] Power was terribly slow; just horrible. I burned about a lap of fuel trying to get around Power or at the very least to try to speed him up, said Dixon."

It seems the Ganassi team may have overestimated what the pace of Power and Hunter-Reay would be in fuel-save mode.

I then asked if the result was made worse by his two closest championship contenders (Helio Castroneves and Hunter-Reay) finishing ahead of him.

"Not really, the points they gained were minimal."

My next question for Dixon was about Formula One. Remember, he tested twice for Williams-BMW in 2004. I asked if there was any disappointment that he never raced in F1.

"It was more a chain of events than anything. Williams was able to sign Mark Webber, who had recently been released by Minardi. I could have been a test driver, but didn’t want to go that route."

Dixon said he loved IndyCar and while he didn’t outright say it, I sense this was not something that he really thinks all that much about.

I then pointed out that him doing F1, would not have allowed the incredibly impressive IndyCar career he has put together at the relatively young age of 33. Noting that only two drivers A.J. Foyt (37)and Michael Andretti (33), recorded more wins than Dixon’s 32 before the age of 33, I asked him if he ever thinks about his place in history. After all, he has one more win before the age of 33 than Mario Andretti.

Dixon then went on….

"I love the history part of IndyCar, but those are the type of things you usually look back on. Right now, I’m thinking about Sonoma."

Trying to get the very humble Dixon to brag about himself, I pointed out that he could arguably be entering his prime as many IndyCar drivers have enjoyed their best years in their mid-late thirty 30s, with his teammate Dario Franchitti being a prefect example. Not surprisingly, Dixon didn’t bite……

"I think Dario has done favors for a lot of us."

I should have asked Dixon a follow-up question here, as to what exactly he meant by that. But I presume he was pointing out how competitive Franchitti remains at 40.

My next question was pretty direct and so was Dixon’s answer: What do you think of a second IndyCar race at Indy?

"Definitely, a no. Indy is there for the 500. Any other race, particularly another IndyCar race dilutes that. I hope that doesn’t happen."

I both agree and disagree with Dixon here. AR1 of course has long been of a different opinion in that the Indianapolis Motor Speedway should be the Mecca of IndyCar racing, and used to help grow the IndyCar brand. However, I see Dixon’s point in that the Indy 500 needs to be kept special, and too many races do run the risk of diluting it, but Sprint Cup, Nationwide, Grand-Am and MotoGP already do a pretty good job of diluting it. Kick those series out and run a 2nd IndyCar race instead.

Shifting gears, I then alluded to Dan Andersen recently noting that he’d like to see some of the IndyCar drivers running Lights races a la NASCAR drivers in Nationwide. Would you consider running some Indy Lights races?

"I would. Being able to is a totally different question. Nationwide and ARCA are different situations in that many of the drivers are tied to the teams. If other [IndyCar] drivers did it, it would be fun; racing is racing. But I’m not sure Chip Ganassi would let me, and it’s not as if they pay anything."

To be totally honest, I was a little surprised by his answer. Had I expected it, I might have prepared a follow-up question about the recent discussion over NASCAR drivers running sprint cars.

This one was pretty direct. Do Indy Cars have enough horsepower I asked?

"No. Part of it is the engines are so small and there aren’t the development budgets like F1. I hope there are some increases as the technology improves, but I would say they need at least another 100-150 horsepower on road and street courses."

Dixon would like to see more horsepower, but he is clearly aware of the financial realities facing the sport. Again, I agree with him on both points.

My last question was with respect to racing in general, and somewhat conversational between Dixon and I. I told him I believed a problem facing the sport going forward is that the strain and skill of drivers is not necessarily discernible to the average person. By comparison, the skill of say, Lebron James, is very apparent to the viewer, the skill of Dixon is less. I asked if he had any sort of response. After giving some of the typical responses about G-loads, and making comparisons to triathletes he then said:

"The average Joe Blow should try about 5 minutes at an indoor go-kart track, then times it by 10."

Dixon’s answer is entirely correct. Unfortunately, not many of the “average Joe Blows," as he calls them, make the connection.

Overall, it was a pleasure to have a nice chat with a champion racer. I hope AR1’s readers enjoyed it as much as I did.