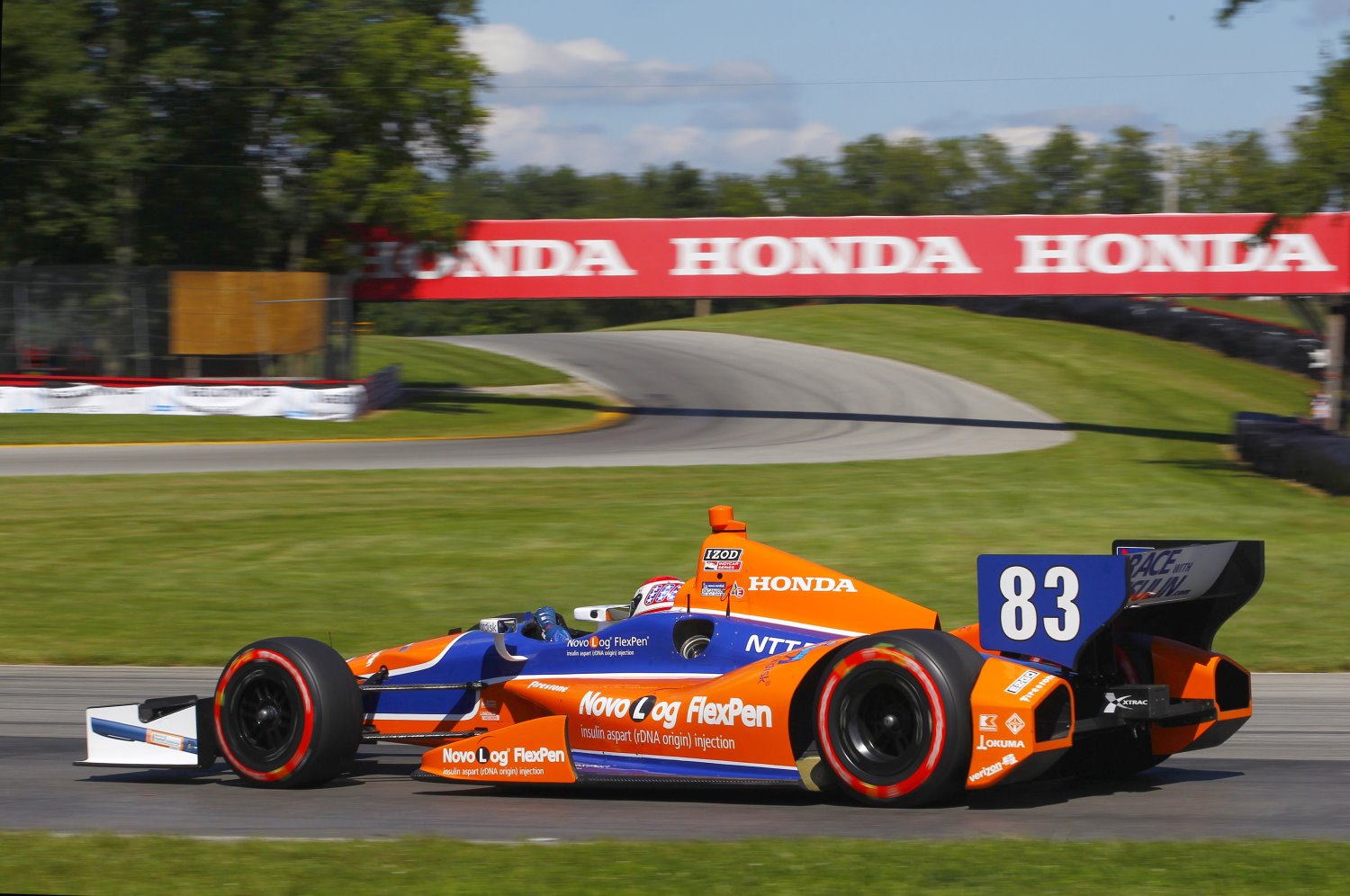 I'll admit, I never got a straight answer.

I asked crew members of the #83 NovoLog FlexPen team, and even asked the driver Charlie Kimball himself after Sunday's race. And while the length of their answers differed (the loquacious Kimball was as you might expect more chatty than some of the crew members), the general consensus was "it was close."

Yes, after Kimball wrecked his Dallara-Honda during that morning's warm-up session the rush was on to get him ready for that afternoon's 2 p.m. qualifying session. At about 12:30 p.m. Saturday I walked by the Chip Ganassi Racing garage and counted fourteen crew members frantically working on the #83 NovoLog FlexPen Honda. About half the crew-members were part of the #83 team, the others part of one of Ganassi's two Target squads.

Ultimately, Ganassi's organization succeeded in preparing the car for Kimball, and the rest is as they say history.

The 28-year old Camarillo, California native qualified fifth, and would go on from there to score his first career IndyCar victory in an impressive drive at the notoriously physical Mid-Ohio Sports Car Course.

Below, we will take a look at Kimball's breakthrough win and other subjects from this weekend's event.

Kimball, as he is always inclined to do, was quick to note that his maiden win would not have happened as part of a single-car team, or possibly even an organization without the resources and experience of Ganassi's. And while that may in fact be the case, no one can dispute this: Kimball took matters from there.

When the green flag flew, Kimball got around Marco Andretti in the early going and started pumping out fast lap after fast lap. When his lap times began to be hindered by the Ryan Hunter-Reay, Will Power and Scott Dixon, who were saving fuel ahead of him, Kimball's team called him onto pit on lap 19.

Ultimately, Kimball scored an incredibly convincing victory beating Simon Pagenaud by 5.53 seconds, which brings us to my next point.

This year's race was extended five laps for the purposes of discouraging teams from trying to make fuel, as they did last year. However, as third-place finisher Dario Franchitti pointed out the manufacturers both made gains in the last 12 months that essentially mitigated the change. In other words, the increased performance of both Chevrolet and Honda, rendered the 5 lap increase not moot, less consequential than likely intended.

Now, a common refrain amongst many fans is that fuel-mileage races are well, boring. And I can't say I totally disagree.

Ideally, we want racers to go as fast as they can, as long as they can. In the case of Sunday, Hunter-Reay, Franchitti and Power, who opted for the two-stop strategy, were unable to beat Kimball. And the predictable refrain was that Kimball assumed the lead based on strategy.

In fairness, there is an element of truth in that. However, Kimball's "fuel-strategy," was one of those who opted to run flat out, as fast as he could.

While I don't want to sound as though I am doing public relations for the series, shouldn't people be happy that one of the competitors who chose to run flat out won? In others words Kimball's strategy was to essentially do what everyone wants – run flat out – yet many still pointed out that he won based on fuel-strategy. Seems odd to me.

As it turned out, the fact Dixon ran the first stint with the intention of a two-stop strategy, then changed to a three-stopper, turned out to be unfortunate for his championship hopes. After qualifying third on a circuit in which he has won four times, Dixon ultimately finished eighth. And while the always cool Kiwi did not lose his composure, he made a rather quick exit after a clearly disappointing day.

Worse, for Dixon, who sits second in the championship, was his performance relative to that of his two closest championship contenders.

Championship leader Helio Castroneves (6th) and Ryan Hunter-Reay (5th) each finished ahead of Dixon. And on a track, where everyone expected Dixon to gain ground, the result has to be disappointing. While Hunter-Reay started on pole, the fact Castroneves, who started 12 spots behind Dixon on a track notoriously difficult to pass, yet finished two spots ahead of him, has to be a huge disappointment.

Should Castroneves ultimately capture that first championship in a close fight with Dixon, I think we will look back on Mid-Ohio as a crucial weekend for the Brazilian.

I want to be careful here.

Having recently joined the beat in covering the series I have been very impressed with the series' drivers. Many of them are well-spoken (in multiple languages). They are all in incredible physical condition, incredibly savvy with the media and public, and excellent ambassadors for the corporations they represent. Sadly, in this era where people of zero accomplishment become famous for boorish, ridiculous behavior, IndyCar is something of the opposite as its stars seemingly are the type you would want your son or daughter to marry.

In short, if you go through the IndyCar paddock you're going to find yourself a fair amount of impressive men and women.

However, it seemed this weekend, the paddock was a little less friendly than usual. No one was outright rude or obnoxious. And I want to be clear, that I am not speaking of anyone specific, rather the paddock collectively. Also, this is not something I can quantify empirically, so I speak here saying this is an observation, not a hard, firm fact.

Still, from my vantage point, and I was in the paddock A LOT, there were fewer drivers signing autographs, and out mingling with the public as they normally do. It seemed there was more of the I'm going to put my sunglasses on, hop on my scooter and go about my business. While I realize there is a time when the drivers must do that, and they have enormous responsibilities during the weekend, there just seemed to be a little more of that than usual.

–I'm not the only one who has pointed this out. Also, to those who have said Tony Stewart should give up sprint car racing, due to his other obligations, I don't necessarily disagree. However, I am of the firm belief that Stewart is a wealthy man, not in spite, but because of his "I will race anything, anywhere, anytime," throwback persona.

–Also, while I welcome people to correct the record on this, I don't recall a lot of people urging Stewart to give up sprint car racing prior to his recent accident. If anything, I recall them celebrating it.

–Don't let Luca Filippi’s 16th place finish fool you. A qualifying accident forced him to surrender his two best qualifying lap times, and he would have advanced to second round qualifying without them. The 27-year-old Italian had one bad session dating back to last Wednesday, and don't discount the fact he finished 16th after starting 24th in a caution free race on a track incredibly difficult to pass.

–I'll also say that Fillipi was impressive when he met with the media Friday.

–I was watching the lap times Sunday (when IndyCar Timing and Scoring was working) and noticed Ed Carpenter turning very competitive times. While many have suggested Carpenter hire a road racing driver for non-ovals (I'm one of them), and no one is going to be too giddy over a 19th place finish, it seems the likable Carpenter has taken a significant step forward with his road racing.

–One thing not helping Carpenter is the fact Ed Carpenter Racing is a one-car outfit. Get this: In Sao Paulo three one-car teams finished in the top-5 (Sato 2nd, Servia 4th, Newgarden 5th). In the five road/street course races since, no one-car team has placed a driver in the top-five, and only twice have one car teams placed in the top-10 (Newgarden 7th, Detroit Race 1 and Tagliani 10th, Toronto Race 2)