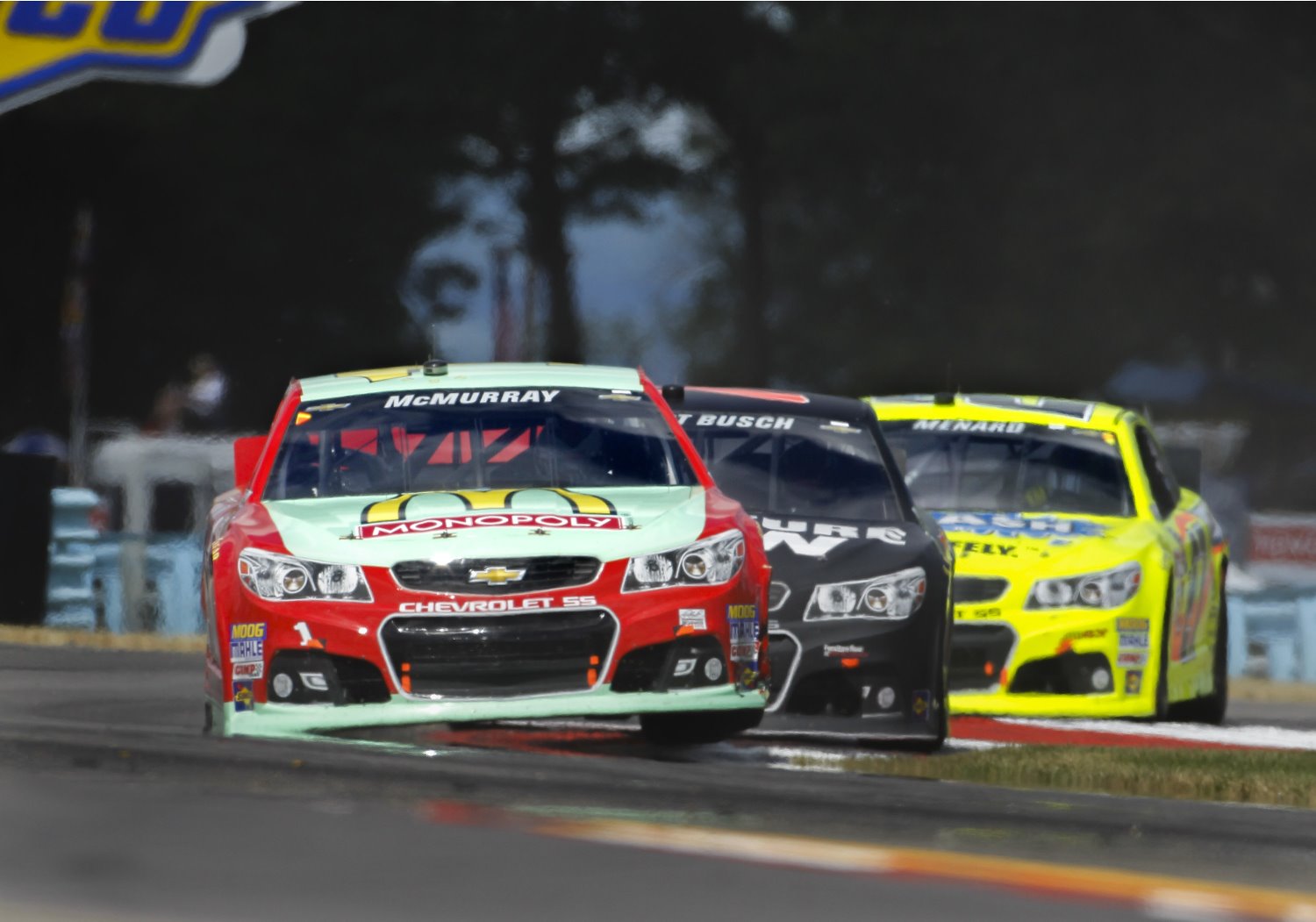 It was another amazing NASCAR Sprint Cup race on a road course. The Cheez-It 355 at the Glen, held at New York's Watkins Glen International Raceway, was loaded with late race drama that saw Kyle Busch and Brad Keselowski going after each other for the win during the race's final laps. There were plenty of other suspenseful moments that saw prominent drivers and teams sufferer setbacks both in the race and the championship points standings.

During the physically demanding process of making a left turn followed by a right turn, some did a slow burn at Watkins Glen.

THUMBS-UP. Kyle Busch pulled off an amazing restart, coming off of a yellow flag, with two laps remaining in the race to collect his third win of the season, 27th career win in 315 Cup series starts as well as his second win on Watkins Glen's 2.45 mile, 11 turn, road course. He successfully fended off a hard charging Brad Keselowski during those final two laps and claimed the win by a mere margin of 0.486 seconds. Martin Truex Jr, Carl Edwards and Juan Pablo Montoya completed the top five.

THUMBS-UP. Busch had some help from a good friend and colleague. That would be crew chief Dave Rogers who made, what ultimately became, a race winning move. When informed from a member of his crew that there was fluid on the track, Rogers anticipated a yellow flag was coming and called his driver to pit road a lap earlier than originally scheduled. Busch was on pit road when that caution came out while the other race leaders had to wait for pit road to open. The scenario placed Busch in the lead and played a major role in the race win.

THUMBS-UP. Following a spin out, very early in the race, Brad Keselowski charged his way to the front at the end of the race only to finish second at the Glen for the third year in a row. While it's not the final scenario that any driver wants to see, Keselowski's latest runner up performance did have some fringe benefits behind it. He elevated himself from 12th to 8th in the points standings at a time when the deadline for the Chase line up is looming large.

THUMBS-UP. The final lap of this race was intense. Busch literally had Keselowski glued to his rear bumper with every NASCAR fan in the country watching on television. Keselowski stayed off of Busch's car and later said "we had a shot at it, I was going to have to wreck him to really get it and I didn't want to do that. There's racing and there's wrecking. Those are two different things."

WHAT'S-UP. You just had to feel sorry for Marcos Ambrose. After leading a race high 51 laps, it appeared that everyone's favorite Aussie was going to win his third Watkins Glen race in a row in his Richard Petty Motorsports Ford. The aforementioned pit stop on lap 63 had Ambrose restarting around 14th. It was immediately apparent that something was wrong with the car. After dominating more than half of the race, Ambrose just couldn't get the car up to its former pace. It was later speculated that a broken track bar mount may have been the problem. Ambrose's day ended on a lap 86 spin and crash that, unfortunately, also involved the cars of Brian Vickers and Max Papis.

THUMBS-UP. Despite the visibly upset driver that climbed out of his wrecked race car, Ambrose displayed a great deal of class during the obligatory television interview and said "that's just the way it goes, we put on a strong showing. It wasn't our day, but we've had plenty of good days here."

WHAT'S-UP. It was a very tough day for Richard Petty Motorsports at Watkins Glen. Their second team car, Aric Almirola's #43 Ford, crashed hard into the turn five tire barriers on lap 61. It's safe to assume that RPM was very happy to roll their car haulers onto a freeway heading south while leaving New York state.

WHAT'S-UP. This Sunday afternoon at Watkins Glen was far from a good day for the teams from Hendrick Motorsports. The trouble arrived early, on lap 15, when Jeff Gordon, heavily favored to win this race, found himself bouncing off of the inside and outside walls located at turn four. The damage was a 36th place finish and a fall from ninth to 13th in the points. With the deadline for the Chase line up only four races away, this team has serious issues.

WHAT'S-UP. The Hendrick carnage continued on lap 82 when a six car melee in turn four heavily damaged the cars of Kasey Kahne and Dale Earnhardt Jr. Kahne finished 34th and fell from 8th to 12th in the points. However, his two previous wins should sustain him for a Chase wild card berth if needed. Earnhardt had to settle for a disappointing 30th place finish after running in the top 15 throughout the day. He fell to sixth in points but should be okay regarding his Chase effort. In a sheer case of unnecessary bad racing luck Jeff Gordon, with the front end of his car removed from the earlier wreck, also managed to get involved in this six car melee.

THUMBS-UP. Jimmie Johnson's #48 team was the lone highlight for Hendrick Motorsports at Watkins Glen although Johnson was never much of a factor in the event. Early in the race Johnson's crew chief, Chad Knaus, came over the radio and told his driver that he had a plan that would improve their track position. Knaus said "if it works we've got a top ten, if it doesn't work we'll finish 30th." The plan was implemented, the plan worked and the #48 team finish eighth.

THE FINAL THUMBS-UP. In recent months there has been a lot of spoken and written opinions that says there should be a road course race in the ten event schedule for the NASCAR Sprint Cup Chase For The Championship. After watching this race at Watkins Glen, and its up and down impact on the points standings, I must say that I now support that theory.