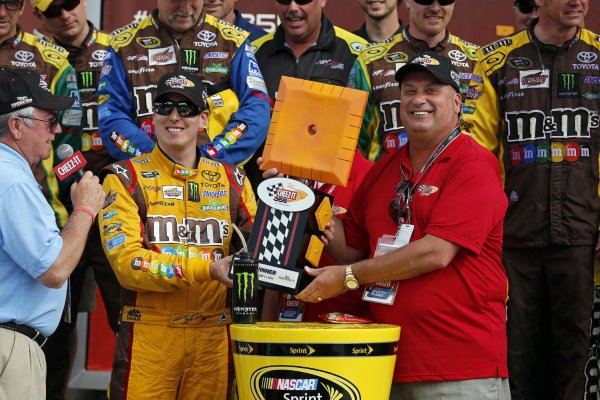 Surviving a succession of restarts in the final 15 laps of Sunday’s Cheez-It 355 at Watkins Glen International, Kyle Busch edged Brad Keselowski for the victory in a two-lap shootout.

Busch collected his third NASCAR Sprint Cup Series win of the season, his second at the 2.45-mile road course and the 27th of his career — but nothing about it was easy.

Aric Almirola’s Ford nosed into a tire barrier after a blowing a tire on Lap 60 to cause a caution that interrupted a cycle of pit stops and knocked pole winner Marcos Ambrose out of the lead. Kyle Busch, Keselowski, Truex, Clint Bowyer and Kurt Busch had already made their final stops, and that quintet led the field to green on Lap 64.

Kyle Busch pulled away to a lead of more than two seconds before caution for debris slowed the field for the sixth time on Lap 77. The race restarted on Lap 81, with Kyle Busch, Keselowski, Truex and Bowyer in the top four spots.

Busch’s work, however, was far from over. After the restart, a wild wreck involving Matt Kenseth, Kasey Kahne and Dale Earnhardt Jr. brought out the seventh caution and required another restart on Lap 85.

Contact between Max Papis’ Chevrolet and Ambrose’s Ford ignited an accident on the restart lap, with Brian Vickers’ No. 55 Toyota also collected in the melee. Forced to lead the field to green for the third time in 15 laps, Busch got away on the restart and held off Keselowski in a battle that intensified on the final circuit.

A multicar wreck on Lap 40 oiled the track and stopped the race for more than 22 minutes. The cars of Ron Fellows and Travis Kvapil collided as the fought for position through the esses, and the ensuing accident also collected the cars of Victor Gonzalez Tomy Drissi and Landon Cassill.

After the red-flag period necessary for track clean-up, Ambrose led the field to the green for a restart on lap 43, with Kyle Busch second and Kevin Harvick — who hadn’t been to pit road since Lap 16 — running third.

The wildly fluctuating fortunes of Jeff Gordon hit another low point at the Glen. Gordon pulled up behind Denny Hamlin’s Toyota as the cars climbed through the esses on Lap 14. Gordon’s Chevy twitched left into the Turn 4 guardrail, slid across the track and nosed into the barrier on the opposite side.

The four-time Cup champion lost 23 laps in the garage as his team repaired the car. Though Gordon returned to the track on Lap 37, he finished 36th and fell out of the top 10 in the series standings.

KYLE BUSCH, No. 18 M&M's Toyota Camry, Joe Gibbs Racing Finishing Position: 1st Were you holding your breath on the final lap?
"Not too much. My car wasn't turning as good as it needed to on four tires, so I was really having to muscle it and try to get it around here as best as I could. But, man, can't say enough about M&M's, everybody from M&M's — all our M&M's associates across the world, we appreciate your support. It's awesome to be back in victory lane with your colors and thanks Interstate Batteries, Norm Miller (chairman of Interstate Batteries). This Toyota Camry was awesome today — just fun to drive. Not quite as good as it needed to be — I think we could make it better. I'm always a perfectionist, so I always want to be better. Can't say enough about Sprint — we appreciate them — Monster Energy and the fans too — the fans on TV, the fans here today. Great turnout. Great job by Watkins Glen International."

How tough was it to maintain the lead?
"Well, I knew that I needed to just keep position on him (Brad Keselowski). I figured that if anybody got out front, it might be their race so I was just muscling as hard as I could to keep at least side-by-side with them and I figured I could out-brake them getting into the Inner Loop. When he broke at the same place I did, I'm like, 'Well, this is going to be interesting. Who's going to give?

I ran a little wide, touched some grass and then came back and when I did it kind of moved him out of my way and I was able to get though there. That kept the lead for us and the car was really good on long runs. Just felt like I could inch away, inch away, inch away the more laps we put on it and just wasn't quite as good as it needed to be on the short run, but just long enough here today. That was good."

Was it difficult to hold off Brad Keselowski on the final restart?
"I felt like our car was really, really good on the long run — we had a great car overall all day today — and on the short run it wouldn't quite fire off on cold tires as good as I wanted it to. Took me a little bit to get it going and those last two laps it still wasn't ready to go and Brad (Keselowski) was all over me there. Great job by this team — this whole M&M's team — I appreciate their support. This Toyota Camry today — it deserved to be in victory lane the last couple years here, so this was 'Rowdy's' revenge. I'm glad it's back in victory lane today."

Do you feel like this makes up for last year's race?
"It was a really, really sticky situation last year to win here and it wasn't all Brad's (Keselowski) fault — there was oil on the race track — but Brad's the one that spun us out. Instead of being able to race three cars — the 18 (Busch), the 2 (Keselowski) and the 9 (Ambrose) — back to the checkers, Brad spun us out. It eventually cost us being able to make the Chase by not having that win here. I figured maybe he could do some of the same again, but he kept it clean today, so I appreciate that and being able to put the right car in victory lane today. Yeah, I could be behind him or I could be behind anybody else and be aggressive and knock them out of the way too, but sometimes when it's your day, it's your day and today was ours."

How important was it that the caution flag came out while you were on pit road?
"That was a game changer right there. Marcos (Ambrose) had a fast race car and I felt like it was going to be a race between whoever he or I could get out front. Fortunately, we did. He got back in traffic and then he got bottled up and then he eventually got wrecked there, but it's just a day that you've got to persevere and you've got to take what comes to you and it's never over until it's over. I could have blew turn six or blew turn seven and Brad (Keselowski) could have had it, but I did what I needed to do to protect my spot and bring this M&M's Camry here to the winner's circle." – more –

DAVE ROGERS, crew chief, No. 18 M&M's Toyota Camry, Joe Gibbs Racing "We had a good baseline from last year. We ran real strong. But the guys back at the shop did a nice job — they built us a brand new car to road course race this year. And then all the guys in practice executed really well. This is one of those races where you can take yourself out by not dotting your 'I's' and crossing your 'T's,' so the guys did a great job. I guess I probably always feel like I missed the setup. I really feel like I missed it a little bit today and Kyle (Busch) just overcame, changed what he was doing in the car and made it happen and got faster as the race. Our fastest laps were at the very end of the race, which is what you're looking for, so hats off to Kyle for bringing it home for the M&M's Camry."

J.D. GIBBS, crew chief, No. 18 M&M's Toyota Camry, Joe Gibbs Racing "Yeah, I do think Dave (Rogers) and Kyle (Busch) really connect well and it's funny — when I get on the pit box and kind of go back and forth on the teams, Dave calls the race, Kyle is in the car, the pit crew is setting the car up and the guys are working — I don't do anything. I know if you ask Kyle, he goes, I'm the same way at the shop too. But the reality of it is to watch these guys do what they do is just — it's impressive and week in and week out it means a lot to Joe Gibbs Racing and all our partners."