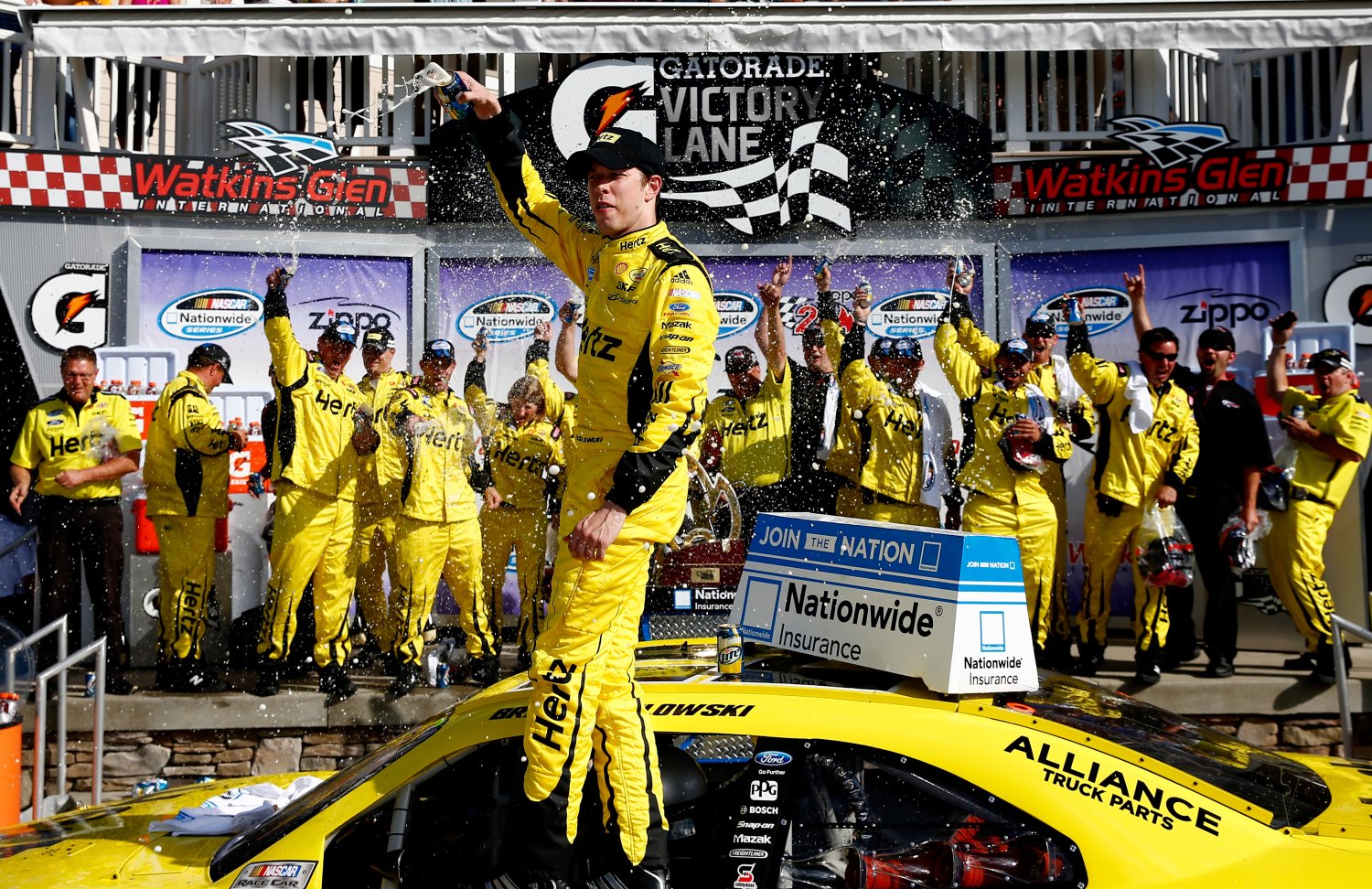 Four-for-four is a great day on the baseball diamond.

Keselowski’s 1.418-second victory over Penske Racing teammate Sam Hornish Jr. in the Zippo 200 was his fourth in his last four NNS starts this season (though not in consecutive events) and the 24th of his career.

Given the strength of his No. 22 Ford Mustangs, Keselowski feels he can win any time he gets behind the wheel, and Saturday’s result bore that out.

"You know they’re going to be fast, and it’s just a matter of getting through all the drama of the race weekend to try to persevere for a win," Keselowski said. "We did that today."

Keselowski also felt fortunate to hold off Hornish in the closing laps.

"I thought he was going to beat me," said Keselowski, who had never driven a road-course race until he came to NASCAR. "I’ll tell you what, he’s a hell of a road course racer. … I made a couple of little mistakes. I thought he would get me, to be quite honest. I was just trying not to make any huge ones, and it all came together."

Hornish, the Coors Light Pole Award winner, got close to his Penske Racing teammate in the final five laps but, despite applying consistent pressure, never got close enough.

"I actually got him either (to) wheel-hop or lock up a little bit into (Turn) 1 a couple of times but just was never close enough to where I could take advantage of anything," Hornish said. "And then with about three laps to go, I got really sideways through the bus stop (inner loop).

"It was a great day for the Penske organization, for sure — a 1-2. We’ve done quite a bit lately, and one of these times we’ll get turned around where I’m the leading end of it."

NASCAR called the fifth caution of the race on lap 58 because of debris in the inner loop, and that deprived front-runners Joey Logano and Justin Allgaier of a 20-second advantage they held before the yellow, with pit stops looming for both drivers.

Allgaier brought his car to pit road under the caution, but Logano stayed out, needing another yellow to make it to the end of the race on fuel. After the restart on Lap 62, Logano led a three-car train of Penske Racing machines until both Keselowski and Hornish out-braked their teammate in Turn 1 on lap 66 to take over the top two positions.

With Logano saving fuel, Keselowski and Hornish streaked away to a lead of more than eight seconds and ran in that order to the finish. Logano ran out of gas on the final circuit at the 2.45-mile road course and finished 21st.

Note: Three drivers have won Nationwide races in five straight starts (though not in consecutive events): Ryan Newman, Mark Martin and Dale Earnhardt Jr. Keselowski will attempt to tie that mark when he races the No. 22 car Aug. 23 at Bristol… Kyle Busch wrecked in the first corner of the first lap and finished 24th, five laps down. As a result, Keselowski trimmed the lead of the No. 54 Joe Gibbs Racing Toyota to five points over the No. 22 Ford in the owners’ standings. Both cars are raced by multiple drivers but are battling for the owners’ championship.