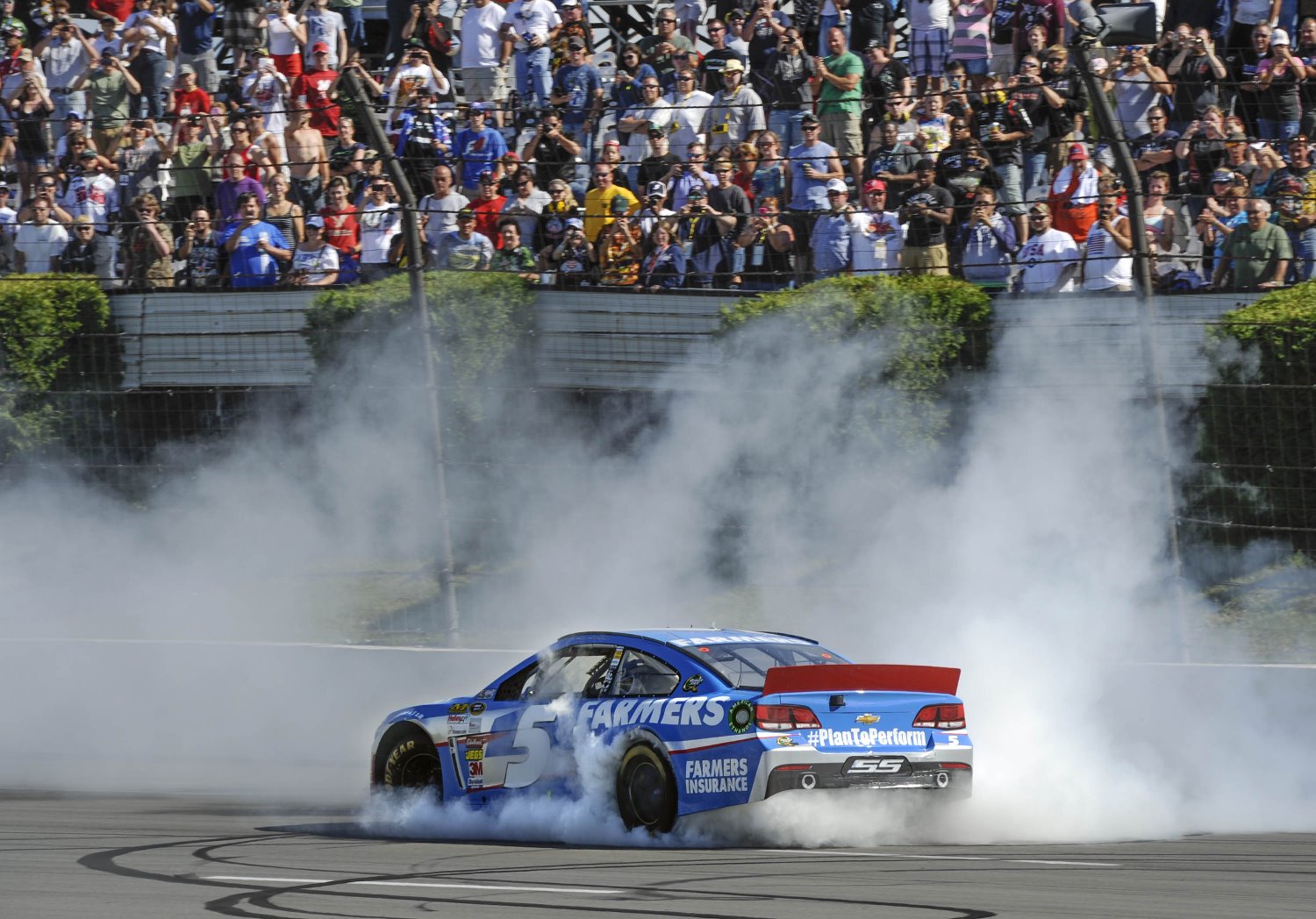 The NASCAR Sprint Cup Series made their annual return trip to the Pocono Raceway for the August 4th running of the Go Bowling (dot) Com 400. For some drivers and teams it was a wonderful, and highly productive, weekend. The kind of euphoric feeling one gets from spending the weekend in the beautiful Pocono mountains. Then there were other drivers and teams who truly believed they were racing at the Poke-Oh-No Raceway located just off the highway to hell.

THUMBS-UP. With two laps remaining in the race, Kasey Kahne took the lead from Hendrick Motorsports team mate Jeff Gordon to literally steal the win. Kahne made a spectacular move on the outside, in his #5 Farmer Brothers Chevrolet, and made it stick. Once he completed the pass, Kahne literally took off and ran up a 1.392 second margin of victory. He led 66 of the scheduled 160 laps on the way to his 16th Sprint Cup career win. Of greater importance, Kahne scored his second win of the season and elevated himself to eighth in the championship points standings. Those two stats are, most likely, going to lock him into the 2013 Chase For The Championship line up.

WHAT'S-UP. Kasey Kahne had a genuine moment of Poke-Oh-No angst when the next to last yellow flag of the race presented itself. due to debris on the track, with ten laps remaining. He had to trade his late in the race lead for a late in the race double file restart.

THUMBS-UP. Jeff Gordon made an outstanding move to take the race lead following the restart and it looked like seven time Pocono winner was going to give himself a very special present in honor of his 42nd birthday.

WHAT'S-UP. The final caution of the race presented itself on lap 157, due to Matt Kenseth's turn two spin. That double file, shoot out, restart allowed Kahne to set up his aforementioned race winning move which saw Gordon having to deal with the Poke-Oh-No angst of watching a potential win pass him by.

THUMBS-UP. Gordon's runner up finish moved him to ninth in the championship standings and elevated his chances for a Chase berth. It wasn't that long ago when we were all wondering if this four time champion was going to make the Chase.

THUMBS-UP. Kurt Busch was the other birthday celebrant at Pocono and turned 35 on race day. His third place finish now gives him five top five finishes and nine top tens on the year. Many observers agree that's pretty impressive for a single car team located in Denver-Colorado. Busch's third place finish moves him to 13th in the standings only 11 points away from the coveted Chase making top ten in the standings. A win, during the final five races before the Chase lineup is set, could make the wild card berth aspect most interesting. Many are now believing that this team is capable of a win.

THUMBS-UP. Following his huge at Indianapolis the weekend before, Ryan Newman scored a fourth place finish at Pocono. Newman is now 15th in the points. His win, coupled with the pace he's running right now, could possibly line him up for a Chase wild card berth. That would be a major accomplishment for a driver who is currently looking for a ride for next year.

WHAT'S-UP. The members of Dale Earnhardt Jr's #88 Hendrick Motorsports team spent a miserable Friday looking for a very bad vibration in their car. In the driver's words, "they changed everything except for the motor." The team lost a lot of valuable practice time on Friday dealing with the problem. The fact that final practice was rained out the following day didn't help any.

THUMBS-UP. The team found a way to keep the vibration to at least a dull roar and Earnhardt was able to turn a 25th starting berth into a fifth place finish. He's currently fifth in the points standings and looking very solid for making the Chase line up. That's what we call making chicken salad out of chicken do do.

DOUBLE WHAT'S-UP AND A HELL TO THE NO ON THE SIDE. What in the world was Juan Pablo Montoya thinking when he made that first lap, first turn, move that triggered a three car crash? That type of dive bomb maneuver is what we expect to see on the final white flag lap of the race, not the first lap of the race.

Montoya sailed into turn one with the finesse of a World War Two dive bomber and made contact with the rear of Ricky Stenhouse Jr's Ford who was sent spinning backwards into the wall. Championship contender Matt Kenseth had absolutely no place to go and sustained front end damage to his Toyota. Montoya wound up finishing 27th, three laps down. Kenseth's car was repaired and he began the process of working his way through the field only to be upset by the aforementioned late race spin. A long day for Kenseth, that began on the first lap, turned into a 22nd place finish. Stenhouse suffered the lion's share of the damage and the team had to practically rebuild the back end of the car. He returned to the race only to finish 34th-47 laps down. Again, this Poke-Oh-No incident just didn't need to happen.

WHAT'S-UP. Wait a minute, the collateral damage from Montoya's move wasn't quite over yet. Later in the race Jamie McMurray, Montoya's Earnhardt-Ganassi Racing team mate, was forced to make an unscheduled pit stop due to an overheating engine. This situation was created by debris on the front grill of McMurray's Chevrolet. It turned out that the debris was a piece of bright red Bear Bond tape, used by crews to repair crash damage on pit road. I think you already know where this is going. Everyone involved with McMurray's car is now one hundred percent sure that the bright red Bear Bond tape flew off of Montoya's car and landed on McMurray's front grill.

WHAT'S-UP. One has to believe that Sprint Cup driver Denny Hamlin has December 31st circled on his calendar. The driver of the Joe Gibbs Racing #11 Fed Ex Toyota probably can't wait to celebrate New Year Eve simply because it will mean that the year 2013 is over.

As we're all aware, Hamlin's racing woes began last March when he sustained a serious lower back injury following an accident at the Auto Club Speedway in California. Since that time this team has been beleaguered with more than their fair share of bad racing luck.

Unfortunately that trend continued at Poke-Oh-No on lap 14th when Hamlin blew a right front tire and slammed hard into the retaining wall. The result was a very disappointing 43d place finish.

DOUBLE WHAT'S-UP WITH A SIDE OF SAY WHAT??? The big Denny Hamlin story of this weekend actually began on Sunday morning when this driver discovered he had landed on the radar belonging to SPEED Channel analyst Kyle Petty. During comments made on the network's "NASCAR Race Day" program, Petty suggested that Hamlin should "suspend his 2013 season and should allow time to heal himself, especially his lower back." Petty also criticized Hamlin for allegedly claiming that he "was the face of Joe Gibbs Racing," adding "I think he's got a little bit of the BK, (Brad Keselowski) syndrome in him right now."

It's not the first time Kyle Petty has made very candid comments about a race driver on television. A recent example was comments made about the race driver potential of Danica Patrick. Petty lit up a media firestorm and created a story line that ran for approximately two weeks. By the way, Danica handled the situation correctly be telling the media "I really don't care what he thinks."

WHAT'S-UP. Hamlin, decided to respond to Petty's comments and began by sending a "Twitter" message that said "Kyle Petty is a moron." Hamlin later stated: "He's an analyst but not a very informative one because he doesn't know anything. My beef with Kyle is: he has a lot of opinions about a lot of drivers, but he never once talked to any of them. To be an analyst you've got to be in the trenches to find out the stories."

Hamlin appeared to be especially upset with Petty's claim that he thought he was the face of Joe Gibbs Racing. In an effort to clarify the criticism, Hamlin said "what I really said was I'm the face of Fed Ex and the #11 team."

WHAT'S-UP. It would have been a lot better for Hamlin if he would have taken Danica Patrick's cue and just say "I don't care what he thinks." Now we have yet another Kyle Petty created firestorm that going to make the racing news for another two weeks. It must be true, look at what I'm doing right now.

WHAT'S-UP. Jimmie Johnson appeared to be on the way to another dominant win at the Pocono Raceway when, on lap 76, he blew a right front tire and hit the wall hard.

THUMBS-UP. The Hendrick Motorsports #48 team, famous for staying calm under stressful conditions, went into what they termed "salvage mode." This means they ca…lmly made repairs to their car and used subsequent visits to pit road to take care of any handling and aero needs. Johnson raced his way to an impressive 13th place finish and actually gained two additional points on Clint Bowyer in the championship standings.

THUMBS-UP. This is how a championship caliber team handles those unexpected moments that often surfaces in the NASCAR Sprint Cup Series. It's also the recipe for making chicken salad out of chicken do do.

WHAT'S-UP. A loose condition caused Danica Patrick to lose control of her car that collected the cars driven by Travis Kvapil, Jeff Burton and Paul Menard. Patrick was 18th at the time and on her way to one of her best finishes of the year prior to the lap 110 accident.

WHAT'S-UP. By the looks of multiple camera angles provided by ESPN, this had all the makings of just being one of those racing deals. However, the racing conspiracy theorists ran amuck and made quick work to point out that this is not the first on track incident between Patrick and Kvapil. That's true, there was an on track incident between them at New Hampshire which Patrick accepted responsibility for. Kvapil was understandably upset and said he never received an apology for the New Hampshire crash and he's definitely looking for one after Pocono.

THUMBS-UP. Jeff Burton was clearly angry with the sudden turn of events and slammed his fist into the roof of his Chevrolet as he exited the car. However, Burton elected to take the high road during the post wreck interview and chose not to throw a colleague under the bus on live television. That's because Jeff Burton is a class act.