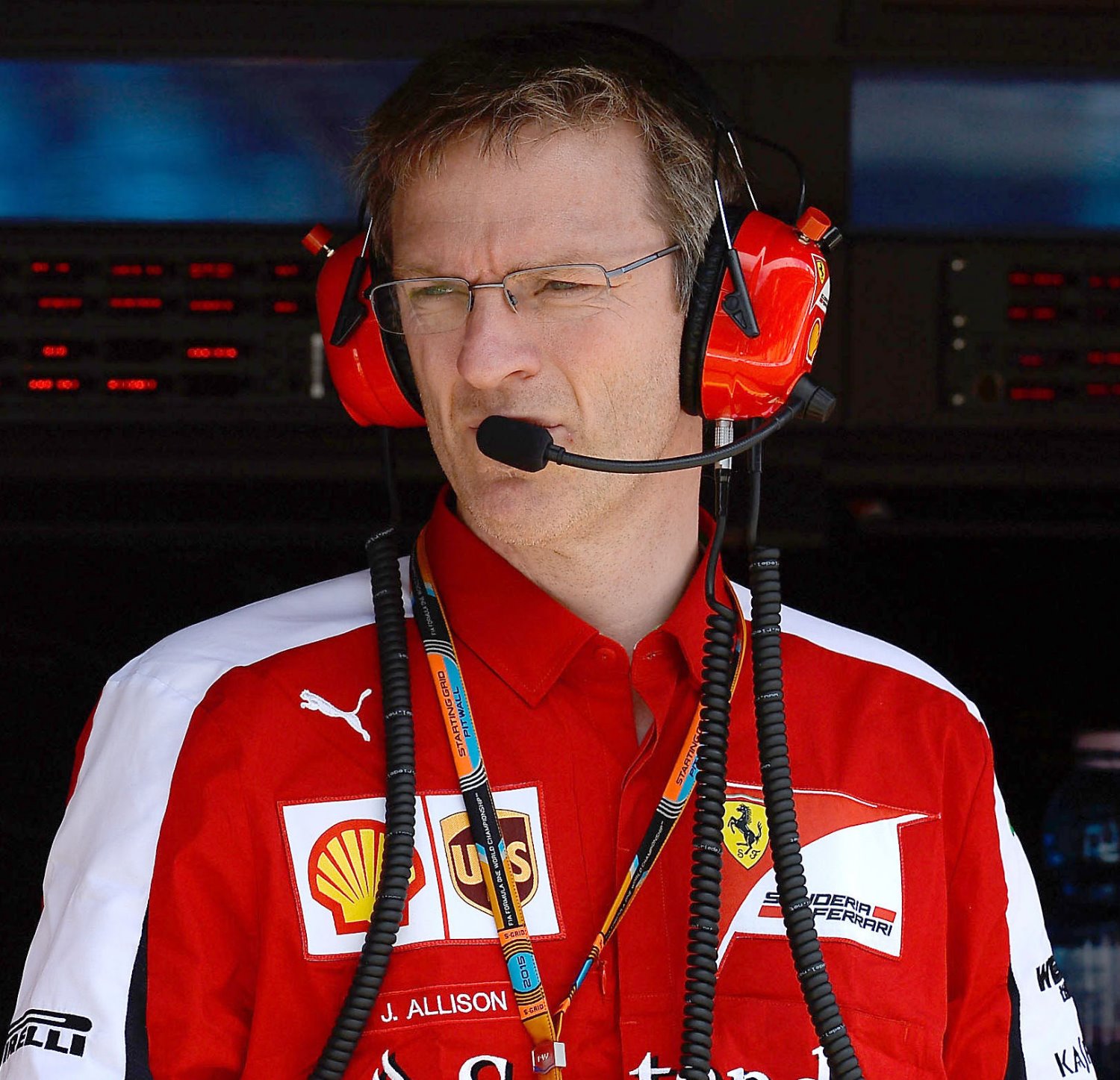 (GMM) Ferrari may issue a surprise at Monza in September by keeping its full team together for 2016.

Amid raging speculation about Kimi Raikkonen's future, the Italian publication Motorionline claims the Finn might actually be about to get his contract extended.

It has been said Williams has already agreed a lucrative deal to release Valtteri Bottas to the Maranello team, but the young Finn is playing that down.

"Before there are any facts we just need to wait and see what happens," he added.

The latest report, by Italy's Motorionline, suggests that Ferrari may be planning not only to announce a new deal for Raikkonen at Monza, but also a contract extension for technical boss James Allison.

It had been rumored Briton Allison could be made the scapegoat of Ferrari's mid-season development slump.

But amid that talk, Sebastian Vettel recorded his second win of the season in Hungary and so "That's why I sent him (Allison) onto the podium," team boss Maurizio Arrivabene told Germany's Sport Bild.

And also performing strongly in Hungary, until his technical problem, was the under-fire Raikkonen.

Arrivabene was quoted by El Confidencial: "I'm really disappointed because, if I am honest, Kimi was really great."

Roger Benoit, the veteran correspondent for the Swiss newspaper Blick, says that if Ferrari simply wants to retain the Finn by extending his deal, it must decide to do so before July 31 — Friday.

But team boss Maurizio Arrivabene says Ferrari will in fact not be thinking at all about the "driver issue" throughout the summer break.

"In the summer break, you take a summer break. You go swimming, climbing, mountain biking — otherwise it is not a break," he insisted.

As the sport enters that break, it is clear that while Raikkonen does have a chance of securing an all-new contract for 2016, Ferrari is also leaving its options open.

Valtteri Bottas was said to be the big favorite.

But Blick's Benoit claims that the deal may have fallen through after Ferrari categorically ruled out paying Williams the EUR 12-18 million it was reportedly demanding for the young Finn's release.

"This is not football," Blick quoted Ferrari president Sergio Marchionne as saying, "so we should leave these (sorts of) transfer fees there."

On the other hand, Benoit said that while Romain Grosjean also has a deal in place with Lotus for 2016, the Frenchman has an exit clause in the event that grandees like Ferrari and Mercedes come knocking.

07/23/15 (GMM) Valtteri Bottas on Thursday did not deny raging speculation he will switch to Ferrari for 2016.

It is rumored the fabled Italian team is set to pay Williams millions to buy out his 2016 contract option, and speaking ahead of the Hungarian grand prix, Bottas also would not confirm if he will still be with the Grove based outfit next year.

"I have no confirmation yet whether I am going to be a part of that (Williams) or not and, like I said, whichever team I'm at I will give 100 per cent," he said.

And Bottas would not be drawn on when there will be clarity about his future.

"Of course as a driver you want it (confirmation) as soon as possible, but sometimes you have to wait. That's life," said the 25-year-old. "For sure we are going to tell when there is something to tell about."

Current teammate Felipe Massa, on the other hand, is hoping Williams will take up his own 2016 contract option.

When asked about reports the deal has already been signed, the Brazilian said on Thursday: "I believe I will drive for Williams next year but maybe the chance this guy (reporter) is correct is bigger."

Meanwhile, Swiss rookie Fabio Leimer on Thursday announced that he will finally make his Friday practice debut this weekend for Sauber.

It is believed his management struggled to put the necessary budget together in time for Austria and Silverstone, amid suggestions the Friday role is a precursor to a full Manor race seat.

(GMM) Valtteri Bottas has reached a deal with Ferrari to replace Finnish countryman Kimi Raikkonen from 2016.

That is the claim of Italy's Corriere dello Sport on Friday, adding that the Maranello team will therefore not exercise the 2016 'option' on Raikkonen's existing contract.

That option does not expire until 31 July, and so there will be no official confirmation of the Bottas deal "at least until that date", the newspaper said.

The report revealed that Ferrari reached an agreement with Bottas' current team Williams, who had a firm option on the 25-year-old's services for next year.

06/24/15
This rumor is upgraded to 'strong' today. Ferrari has launched a bid to secure the services of Valtteri Bottas, according to Germany's Bild newspaper.

Amid heightening speculation about Kimi Raikkonen's future at the Italian team, the report said Ferrari has made "an offer" not only to Finn Bottas, but also his current team Williams.

That is because the British team has a firm contractual 'option' on Bottas' services for 2016, and is determined to keep the highly-rated 25-year-old.

"It would be a pity if he leaves the team," said Williams' experienced technical boss Pat Symonds. "I know he feels very comfortable here, and he is an important part of the team."

Bild claims that Ferrari is offering to pay Williams 4 million euros to release the young Finn, "but deputy boss Claire Williams is demanding much more".

The report believes Williams' counter-offer could be as much as EUR 15 million, which has been initially rejected by Ferrari's Maurizio Arrivabene.

But Bild said that if Bottas ultimately does go to Ferrari, the main contender to fill his place at Williams would be the team's driver of 2010, Nico Hulkenberg.

The report said Hulkenberg is not in the running at Ferrari because the Italian team would not want to pair Sebastian Vettel with a second German driver.

(GMM) Valtteri Bottas on Thursday tried to play down rumors he is shaping up as a Ferrari driver of the future.

The Williams driver denied the wilder of the reports, for instance that he has already signed a 'pre-agreement' to join the fabled Italian marque.

"I saw some and heard plenty of stories and it's sometimes quite funny to hear those because in the end you know what's the case and what's not," the Finn told reporters in Barcelona.

"There's a lot of people making up stuff."

Curiously, however, Bottas clarified that he is not sure where he will be driving next year.

"The fact is that at the moment I am just focusing on this season and getting the maximum for us as a team. Then the rest I don't know yet," said the 25-year-old.

"There has been always many kind of rumors so I'm not really thinking about those. That's for my management to think about," Bottas added.

"At the moment I am not thinking about any move."

Earlier, Finnish media sources had said Bottas – a stand-out young driver in F1 – could be retained by Williams for 2016 due to a contract option.

Bottas repeated that he is putting his faith in his management, which involves Didier Coton, double world champion Mika Hakkinen and Mercedes chief Toto Wolff.

"I am sure they have some kind of plan for my career, for years ahead," he said. "If they have something solid for sure they will speak with me but at the moment we haven't spoken about the future."

05/03/15 (GMM) Ferrari boss Maurizio Arrivabene has not ruled out a move to the fabled Maranello team for Valtteri Bottas in 2017.

The Italian was interviewed by Germany's Bild am Sonntag newspaper following speculation Finn Bottas may already have inked a 'pre-agreement' with Ferrari to move from Williams at the end of the season.

Finnish sources played down those reports, but elsewhere it was suggested that the Ferrari-Bottas link was actually referring to 2017.

Indeed, Arrivabene on Sunday indicated that Kimi Raikkonen is likely to keep his place alongside teammate and friend Sebastian Vettel next year.

"If he continues like this, we will extend for another year," he said, referring to 35-year-old Raikkonen, who like Bottas is also Finnish.

"But performance alone is only one thing — I also like how he (Raikkonen) and Seb work together. They even sometimes travel together, so these are things that do influence a decision."

Regarding 2016, Arrivabene's mind sounds made up.

Speculation Lewis Hamilton could be heading to Maranello from Mercedes, therefore, is dismissed.

"Why do I need Lewis Hamilton when I have a heavyweight like Vettel?" said Arrivabene.

"I would rather look around for a young, talented driver to unite with Sebastian," he added.

Williams driver Bottas, 25, would appear to have definitely caught Arrivabene's eye, paving the way for the new rumor — that Bottas has signed a pre-agreement already for the 2017 season.

Arrivabene said: "I promised in the pre-season that I would never lie to you (the media), but for this question it is too early to give a precise answer."

05/01/15 (GMM) A Finnish media source has hit back at rumors Valtteri Bottas is closing on a switch to Ferrari.

Italian sources this week reported that the Williams driver could replace fellow Finn Kimi Raikkonen at Ferrari next year, and may even have already signed a pre-agreement.

But Oskari Saari, a well-connected commentator for Finnish television MTV3, said he believes the rumors are not true, "and I have pretty good sources on this issue".

"Williams has an option on Bottas for next season, and basically it would prohibit any such preliminary agreement (with another team)," he explained.

"Of course people always go behind backs, but I understand he denies making any other commitments before the team (Williams) has made a decision to use the option or not," Saari continued.

However, he said a Ferrari switch for Bottas cannot be completely ruled out, despite the fact he is managed by the Mercedes team boss Toto Wolff.

"Ferrari has an option on Kimi Raikkonen," said Saari, "so if they do not want to proceed with Kimi, they will look at the next-best options and Valtteri is definitely among them.

"But at this stage, to my knowledge there have not been any agreements signed."

Former double world champion Mika Hakkinen, now involved in the management of the Williams driver's career, said this week that if he was the decision-maker at Ferrari, he is not sure he would retain Kimi Raikkonen.

On the other hand, "Valtteri showed how well he can handle the pressure" as he raced Sebastian Vettel in Bahrain, Hakkinen told his sponsor Hermes in an interview.

"It was exactly the sort of strong nerves that drivers need in the fight for world championships," he insisted.

Media sources now suggest that Bottas may have already penned a preliminary contract with Maranello based Ferrari.

The rumors also indicate that the forthcoming F1 entrant Haas, which is being widely referred to as a Ferrari 'B team', could house Raikkonen next year, as the Finn is pushing for the 2016 'option' in his contract to be signed.

Finally, the rumors suggest Williams would fill the seat vacated by Bottas with Pascal Wehrlein, who is engine supplier Mercedes' reserve driver.

To accommodate the Bottas-Wehrlein movement, Mercedes may be prepared to discount the fee paid for its engines by Williams, who recorded a $50 million financial loss in 2014.