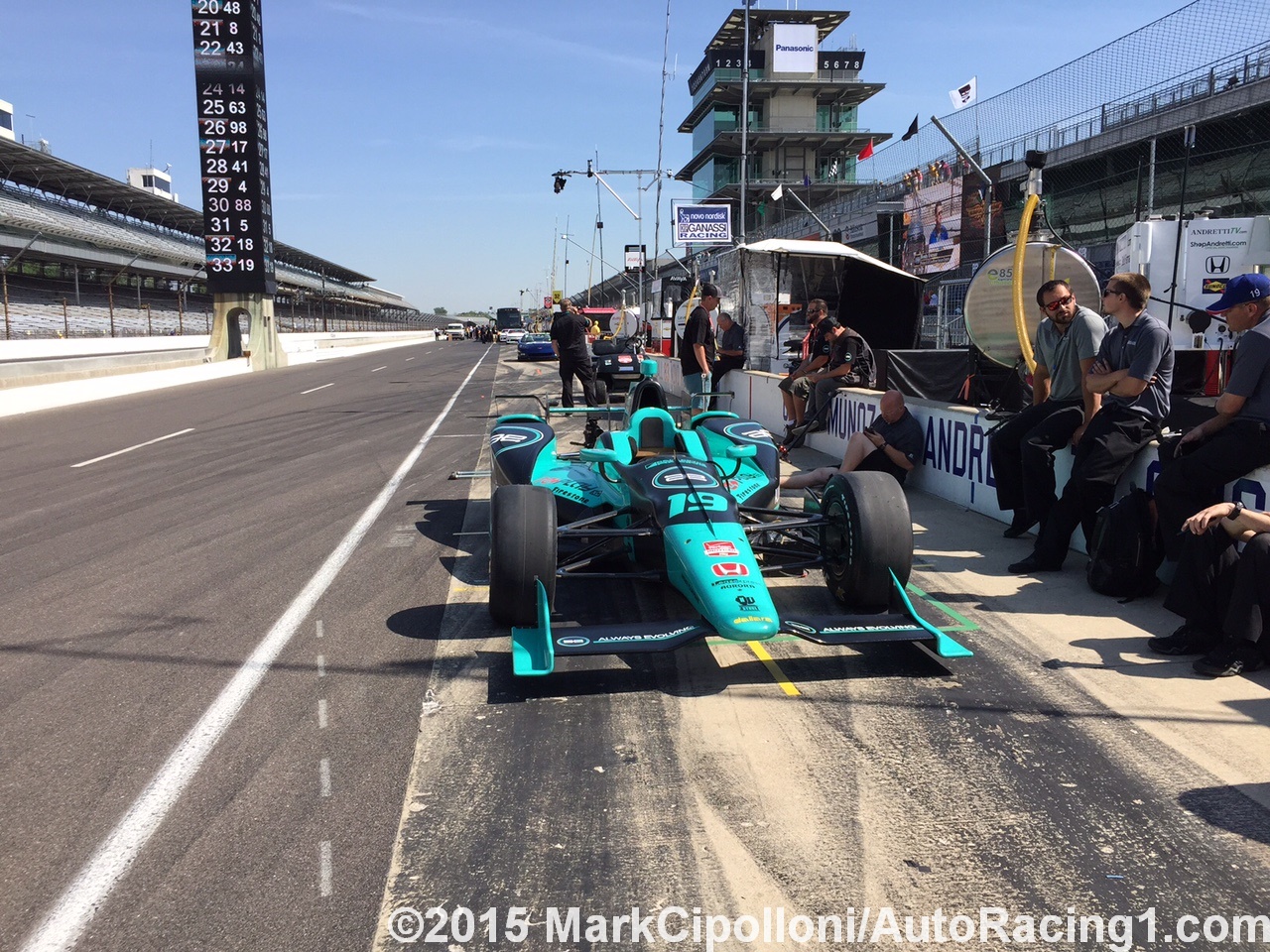 UPDATE #2 More proof it is the Chevy Butt Bumpers that are causing the cars to take flight. Watch this video closely. Tony Kanaan crashes his Chevy Sunday at Indy and the car gets backwards but does not take flight. Why? Because his Chevy Butt Bumpers were knocked off the car on first impact and therefore when the car turns backwards it stays on the ground. IndyCar would be wise to require the Chevy teams to either remove their Butt Bumpers before the Texas race, or have them redesigned to be squared off in the back like the Hondas.

James Davison turned the fastest lap on Saturday in Dale Coyne's No. 19 Honda. Turned out Davison was the only IndyCar driver to turn a lap on Saturday. The team had to change the engine cowling because the direct injectors were not working right and IndyCar let them do an out-in lap to make sure everything is working well.

We hear that Honda is working on modifications to their road and street circuit aero package that they plan to release to teams as soon as it is ready. They will use up some of their 2016 aero tokens for the change.

There is still a lot of concern in the paddock that if a Chevy gets backwards during the race it will take flight. The following diagram explains the difference between the Chevy (sloped back endplate) and the Honda (vertical back endplate) design of the Butt Bumper when the car is traveling backwards.

Since the Chevy's is a sloped surface the force of the air hitting the surface breaks down into two force vectors – a vertical lift vector and a horizontal drag vector. Whereas the Honda has a vertical endplate that causes drag but no lift. Honda HPD boss Art St. Cyr addressed this during a press conference saying Honda ran many CFD models of the aerodynamics of the car at all angles and the design they went with was as safe and fast as they could make it.

Staying on the topic of Butt Bumpers, we hear that Honda plans to introduce an updated street and road course version sometime this year in an effort to catch up to the Chevys. This means they will need to use up some of their 2016 aero change tokens in 2015, which is allowed by the rules.

There is also talk of switching back to the 2014 aero kits on the remaining oval races. We think IndyCar will have no choice if another Chevy takes flight on Sunday.

Did you know that the Butt Bumpers weigh around 60 pound? That is a lot of weight hanging out behind the rear wheels, increasing the polar moment of inertia of the car so when it get a little sideways it suddenly snaps out of control. The radiators and other components also shifted rearward with the new body kits and that means the car has a high percentage of its weight toward the rear of the car making it unstable. That combined with the hole IndyCar put in the floor of the car (what the hell were they thinking) has caused to be ill-handling. Some drivers, especially the Honda drivers, have complained that the car to switches between oversteer and understeer.

We hear the Honda makes more dirty air behind it than the Chevy body kit making it a bit harder to pass. Whether that was by design, or by accident, it is what it is.

Did you know that the teams cannot modify anything on the cars with regard to aerodynamics unless they get a tech bulletin from Chevy or Honda? IndyCar racing (and even more so F1) has become an engineering endeavor not a sport.

Changing topics to the recently announced Boston race – the secret to drawing a big crowd will be to attract the college students in Boston out to the event. Did you know that there are 28 four year colleges in Boston? Yup and they are all back from summer break by then and Fall semester classes are just starting. The students will be in the mood for a big party and IndyCar can deliver that if they advertise heavy on each campus.

Did you know that the Indy 500 is so expensive to compete in that you have to finish 4 or better to breakeven? Mark C. reporting from Indy