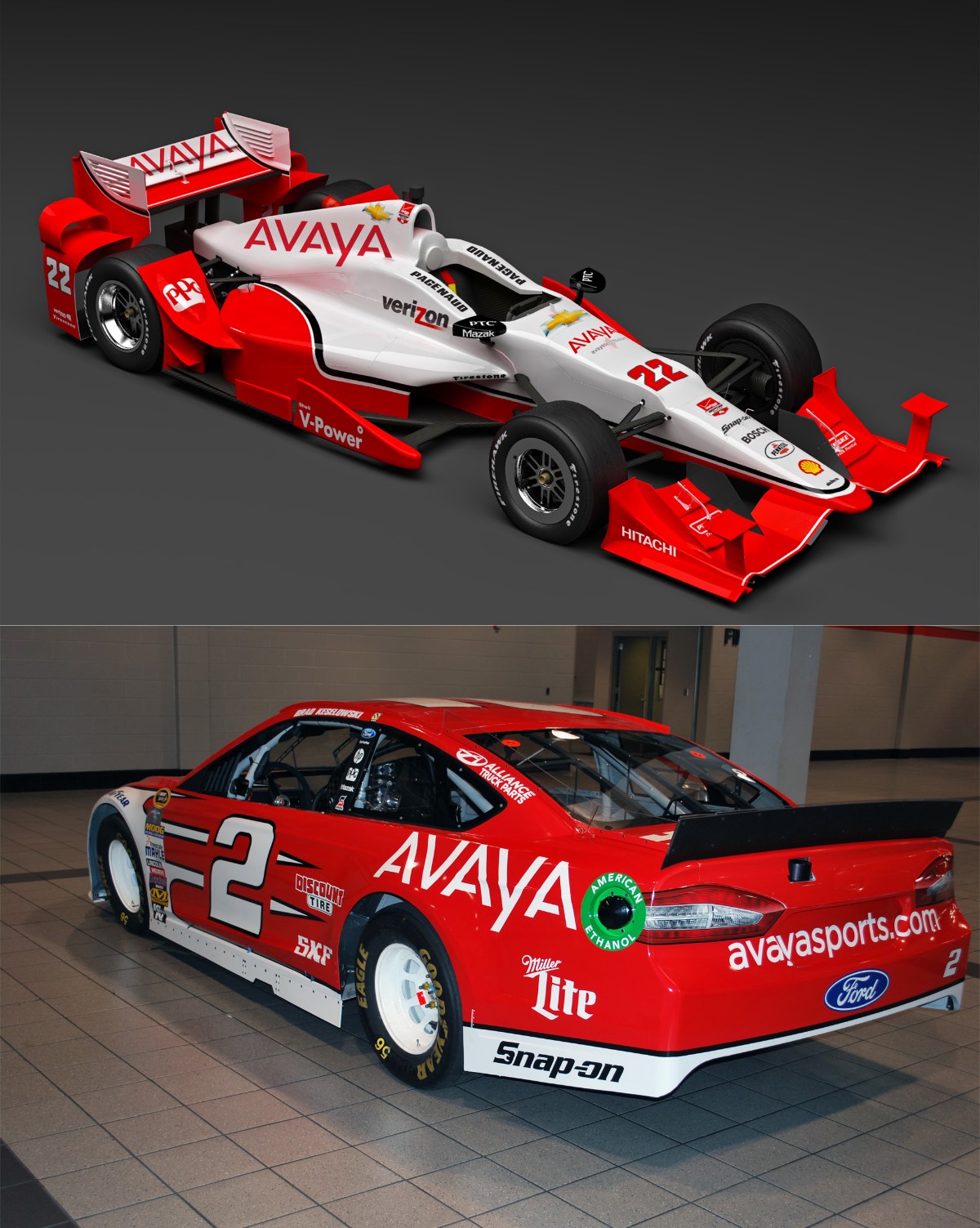 UPDATE This rumor is upgraded to 'fact' today. Team Penske announced today that it has partnered with Avaya as a team sponsor for the 2015 season in both the Verizon IndyCar Series and the NASCAR Sprint Cup Series. Simon Pagenaud will pilot the No. 22 Avaya Team Penske Dallara/Chevrolet for at least four Verizon IndyCar Series events in his first season with Team Penske, including the 99th running of the Indianapolis 500 on Sunday, May 24. Avaya will also adorn the side of the No. 2 Ford Fusion driven by Brad Keselowski in the Sprint Cup Series event at Kansas Speedway on Saturday, May 9.

The Avaya partnership was fostered through the established, long-term relationship between Team Penske and HP. Together, Avaya and HP Enterprise Services are delivering infrastructure modernization services, including Unified Communications as a Service (UCaaS) OnAvaya and Customer Engagement as a Service OnAvaya to help customers rapidly deploy enterprise team and customer engagement solutions as they transition to a “New Style of Business." As technology continues to revolutionize communications in racing, the partnership between the three organizations is a winning combination for all.

“We are excited to welcome Avaya to Team Penske through their relationship with HP, supporting Simon Pagenaud and Brad Keselowski," said Roger Penske. “Avaya is a growing global brand that has a great opportunity to continue that growth through motorsports. We can benefit from Avaya’s technologies and expertise across our Penske businesses and we appreciate their partnership as Simon and the No. 22 team establish themselves as championship contenders in the Verizon IndyCar Series and Brad continues to work toward the Chase with the No. 2 team in the NASCAR Sprint Cup Series."

The new relationship with Team Penske is the latest sports partnership for Avaya as the company continues to build its brand by working with winning programs – see the full list at www.avayasports.com

“Avaya and HP, two of Silicon Valley’s business technology powerhouses, have been on the forefront of communications and enterprise technology innovation for decades," said Joe Manuele, vice president, Global Cloud Services, Avaya. “Communications is entering the cloud-era, and we are proud to offer our technology and expertise to Team Penske in an effort to help the team continue to produce at a high level."

In addition to sponsoring the No. 22 Chevrolet at the Indianapolis 500, Avaya will also serve as the primary sponsor for Pagenaud and his team in Verizon IndyCar Series events this season at Texas Motor Speedway, the Streets of Toronto and Sonoma Raceway. Pagenaud, in his debut season at Team Penske, is currently ranked ninth in the series point standings after posting top-10 finishes in three of the first four races this season.

“I’ve had a long-standing relationship with HP over the years, so to see that expand and to now be associated with a company like Avaya is pretty special," said Pagenaud. “I want to succeed on the racetrack with Team Penske and having a sponsor like Avaya on the car will help our team reach new heights. We can’t thank them enough for their support and I hope this is just the beginning of a winning partnership."

Avaya will also make its debut in the Sprint Cup Series when the company will be the primary sponsor of the No. 2 Ford Fusion driven by Keselowski at Kansas Speedway on Saturday night, May 9. Keselowski, the 2012 Sprint Cup Series Champion, will be looking for his second-career Kansas win, with his first coming in 2011.

“It’s always great to see global companies come into our sport," said Keselowski. “We’ll be excited to welcome Avaya to the No. 2 team that night in Kansas. Our goal is always to go out there and win with all of our partners and it would be great to bring Avaya on board at Team Penske with a trip to Victory Lane in Kansas."

04/30/15 Rumor has it that HP and Avaya will sponsor Penske driver Simon Pagenaud in this year's Indy 500. The deal is said to also include Penske's NASCAR ride for Brad Keselowski we assume for the Coca-Cola 600.