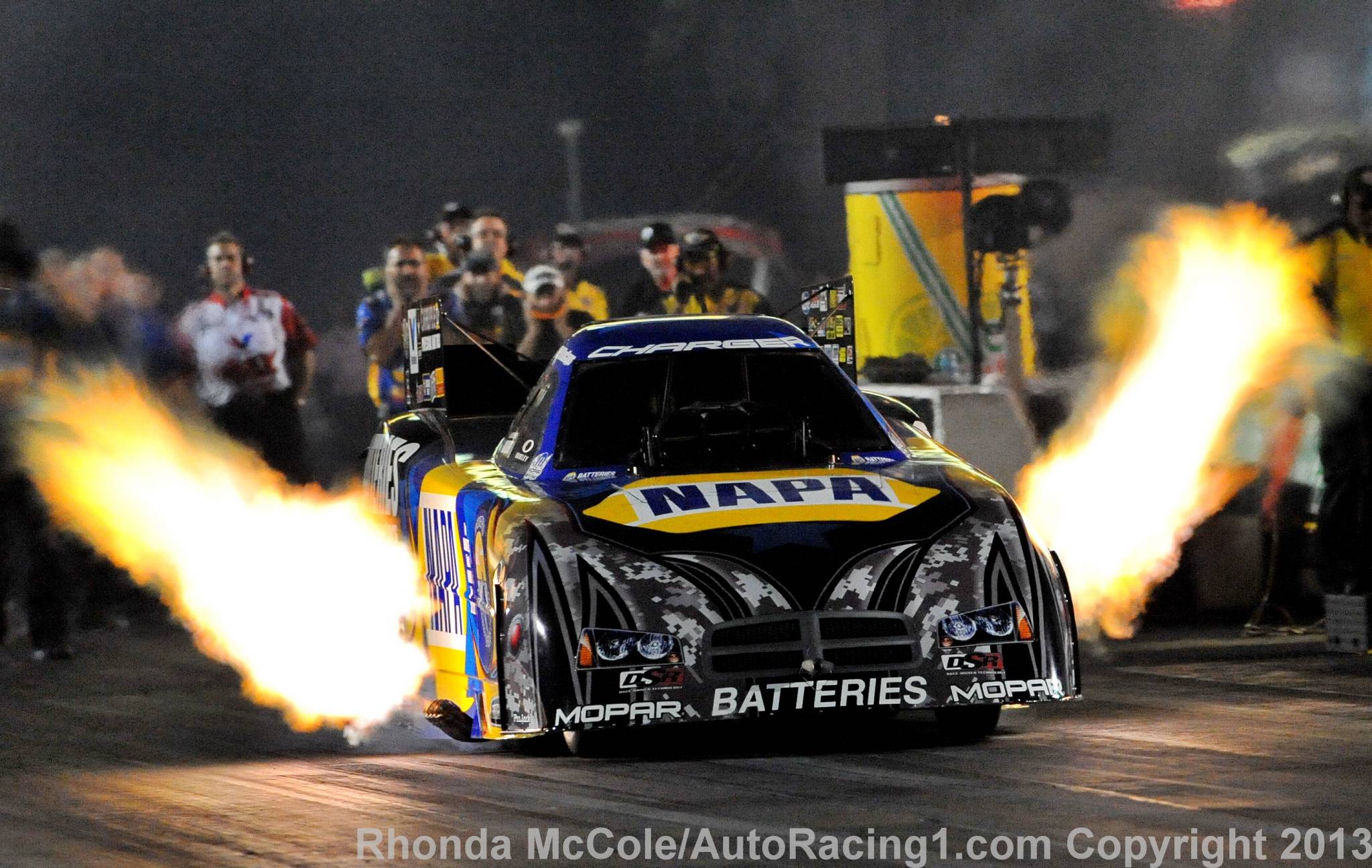 After dodging rain showers that shortened Friday’s qualifying to just a single session, Saturday’s final two round of qualifying produced record-setting passes in three of the top four divisions as well as the first three-second Funny Car run in track history set by Ron Capps.

“I really didn’t think it would hold since we ran so early in the session," said Capps. “It was a great run. I thought (Matt) Hagan or (Jack) Beckman would go quicker than that, but we’ll take it. I’ve been hit or miss at this place, so maybe we can get one tomorrow. It’s great for the fans to have two night sessions. Funny Cars racing at night; it doesn’t get a lot better than that."

At the start of Saturday’s session, John Force started right where he left off – atop the leaderboard with a new track record ET of 4.021 seconds that stood up until Capps came out in the second session with the third-quickest pass in NHRA history to bump Force and win his 15th-career no. 1 qualifier.

In all, seven of the top 10 drivers were able to improve their times in the second session, with the top five all under the previous track record.

Bob Bode, making his first start of the season, took the bump spot and will face Capps in the opening round of Sunday’s eliminations.

Records continued to fall in Top Fuel, as the track ET and speed records changed hands three times before Morgan Lucas set the mark to beat with a record-breaking pass of 3.737 seconds at 322.27 mph to set a new track ET record and jump from eighth to the head of the field for his first no.1 qualifier of the season.

Lucas was among seven drivers who eclipsed the track ET record of 3.763 set last year by Tony Schumacher, with Doug Kalitta setting the bar in the opening round of qualifying, going 3.753 at 328.22 mph to set the ET record and a new track speed record.

In the second round, Bob Vandergriff set a personal best ET of 3.742 at 324.28 mph to stake his claim to the ET record, until Lucas came up as the next qualifier and take sole possession of the ET record.

Schumacher came within .001 seconds of tying Lucas and reclaiming his qualifying record, going 3.738 at 324.12 in the final run of the day to take second place. Vandergriff slid down to third ahead of Clay Millican, who moved up to fourth with a time of 3.750 at 323.81 mph. Kalitta held onto fifth and managed to hold onto the track speed record.

“This was really big for our team," said Lucas, who notched his ninth-career top qualifier. “I was thinking while I was sitting in the car before the run that I would be happy with anything in the 3.7s. Afterwards, we had to see if it would stick. And when Tony [Schumacher] made his run, I was sweating it out, especially when [announcer] Alan Reinhart paused before giving out the last digit. We’ve made a ton of changes to our car, and hopefully things are starting to turn around for us."

Mike Edwards found himself in familiar territory in Pro Stock qualifying with his 10th top qualifying effort of the season and his fifth in the last six races, posting a track-record pass of 6.542 seconds at 210.64 mph.

Edwards set the fast time in each of the three qualifying sessions, briefly losing the top spot early in each of Saturday’s rounds to come back with a record-setting run in the opening session of 6.570 seconds, topping the 6.586 set by Greg Anderson in 2011.

After Allen Johnson jumped to the top spot in the second session with another record-breaking effort, Edwards came roaring back and set the bar even lower, grabbing his 51st-career no. 1 qualifier and the track speed record to boot, beating his own record of 210.08 mph from June of 2009.

Matt Smith won his second pole of the season in Pro Stock Motorcycle, going 6.908 at 193.82 mph to bump Scotty Pollacheck from the top of the ladder.

Pollacheck held the low ET from Friday through the first session as no one in the top ten was able to improve on their time, but in the second session Smith and wife Angie were the only two riders to move up the ladder, with Angie going from tenth to fifth.

“We’ve had top speed on every run, but we needed the 60-foot times to go with it," Smith said. “This track is so good that we were bogging the bike, but I made a lot of changes to both my bike and (wife) Angie’s bike for the last run, and we ended up 1 and 2 for that session.<

“(Angie) has a fast bike, and she made a good run that time. I’m excited about our whole deal."