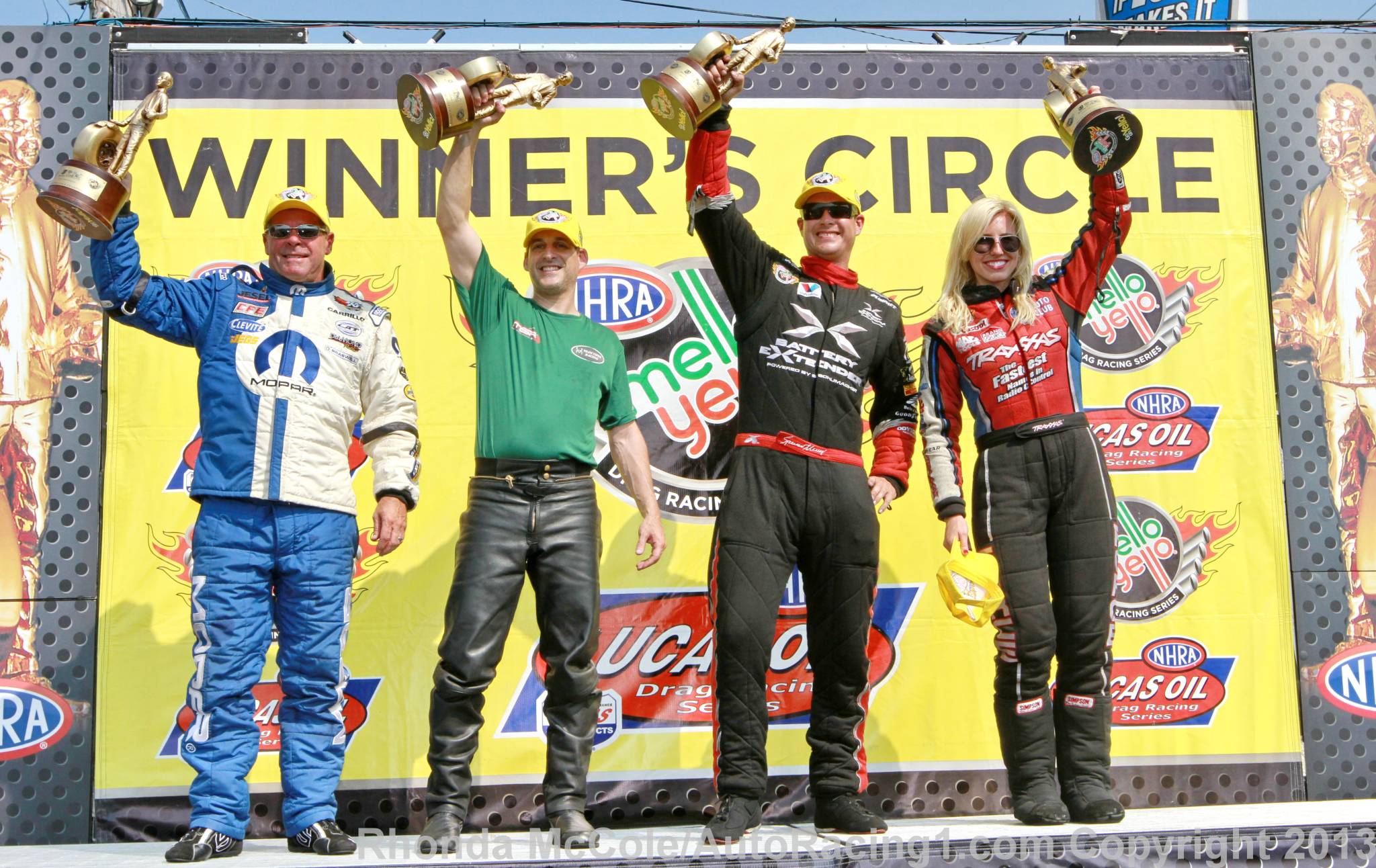 It was a family affair in the Funny Car finals at the inaugural New England Nationals as daughter took on father in the money round with Courtney Force rallying to defeat 15-time champion John Force for her second win of the season as the NHRA Mello Yello Drag Racing Series wrapped up their first-ever visit to New England Dragway in Epping, N.H.

Spencer Massey won his second race of the season in the Top Fuel division and Allen Johnson topped the Pro Stocks with a holeshot victory, while John Hall became a first-time winner in Pro Stock Motorcycle.

It was just one week ago in Bristol that Courtney Force and John Force faced each other in the opening round with John getting the better of his daughter and going on to the finals to end a 31-race winless drought.

On Sunday, John Force was looking to make it two in a row and score a weekend sweep after taking top qualifier honors on Saturday.

Coming into Sunday’s finals as the third qualifier, Courtney Force picked up round wins over Alexis DeJoria, Tim Wilkerson and defending series champion Jack Beckman to advance to her third final round of the season.

For Courtney, it was just her seventh career final round – going up against her legendary father, who was making his 218th run for the money. It would mark the fourth time John Force had faced one of his daughters in the final round, having gone up against his daughter Ashley three times in the last five seasons.

At the start, it was John Force off the line first, hitting a .057 light to lead the first 300 feet before his car started throwing cylinders, allowing Courtney to catch up and power past, but just when it looked like Courtney was going to have an easy run to the finish, her car started sputtering as well.

With both drivers pedaling their Ford Mustangs toward the finish, John began to close the gap on Courtney, but ran out of racetrack as Courtney barely made it the finish by 10 feet over John, going 4.301 at 261.67 mph over John’s 4.367, 262.28 in a close – albeit slow – final round race.

“I definitely told him I was going to get some revenge (from last week) and we were able to do it. It was a lot of fun," Courtney Force said. “We went to the top spot in qualifying and got bumped by my dad. I thought, ‘Man, he’s moving around me in points,’ and it was just time for a little revenge.

“We got down there and our car got in a little bit of trouble, but I had my foot on the throttle hoping he wouldn’t catch up. After the win, he came over and hugged me and congratulated me. We were both really excited and it was great for our team."

Spencer Massey came out on top in the Top Fuel final that matched up two of the divisions powerhouse teams, with Massey’s Don Schumacher Racing team getting the best of Al-Anabi Racing’s Shawn Langdon for his second win of the season.

Looking to rebound from his final round lost to Steve Torrence last weekend at Bristol, Massey first took down Khalid alBalooshi to eliminate one of the Al-Anabi entries, then beating teammate Tony Schumacher and top qualifier Doug Kalitta to advance to his second straight final round.

Meeting each other in the finals for the first time, it was Massey first off the line as Langdon launched the front end before going up in smoke, leaving Massey to cruise to the finish, going 4.105 at 271.57 mph for his 12th-career NHRA victory.

“I’ve been jacked up all weekend, but I really wanted to win this inaugural event," Massey said. “This whole area is filled with die-hard fans and they were so ready for NHRA drag racing, so this victory really means a lot to me. We were having the time of our life this weekend.

“Starting from the first round, it was tough. Racing Tony (Schumacher) in the second round, that felt like a final. Shawn (Langdon) had been cutting great lights all weekend long, but I was just trying to get the car to the finish line as quickly as possible."

Despite the runner-up finish, Langdon moved to first place in the standings over Schumacher by 43 points while Massey remains in third, 70 points back.

In Pro Stock, defending series champion Allen Johnson scored his third win of the season and move into second in the points standings with a thrilling holeshot victory over Shane Gray.

Johnson bested John Gaydosh, Jr., Tom Martino and points leader Mike Edwards to move on to his third final round in the last four events and his first career finals matchup against Gray.

With the win, Johnson jumps from third to second in the points, 124 points behind Edwards.

John Hall became a first-time NHRA Mello Yello Series winner in the Pro Stock Motorcycle division with a win over rookie Adam Arana in the final round after Arana fouled out with a red-light start.

Facing Jerry Savoie in the opening round, Hall advanced in a close race then moved onto the quarter-finals after Matt Smith fouled out. Hall then bested LE Tonglet to move onto the finals.

With both riders coming into their first career final rounds, both drivers worked hard to keep calm and focused, but at the start it was Arana jumping too early, going red by .070 seconds to hand the win to Hall, who ran 6.924, 193.93.

“I don’t think it’s sunk in yet," said Hall. “You just have to stay focused and not do anything you’re going to regret. I made some mistakes last year and I’m just trying to not do that this year."

Hall moved into second place in points behind Hector Arana, Jr., who leads by 92 points.