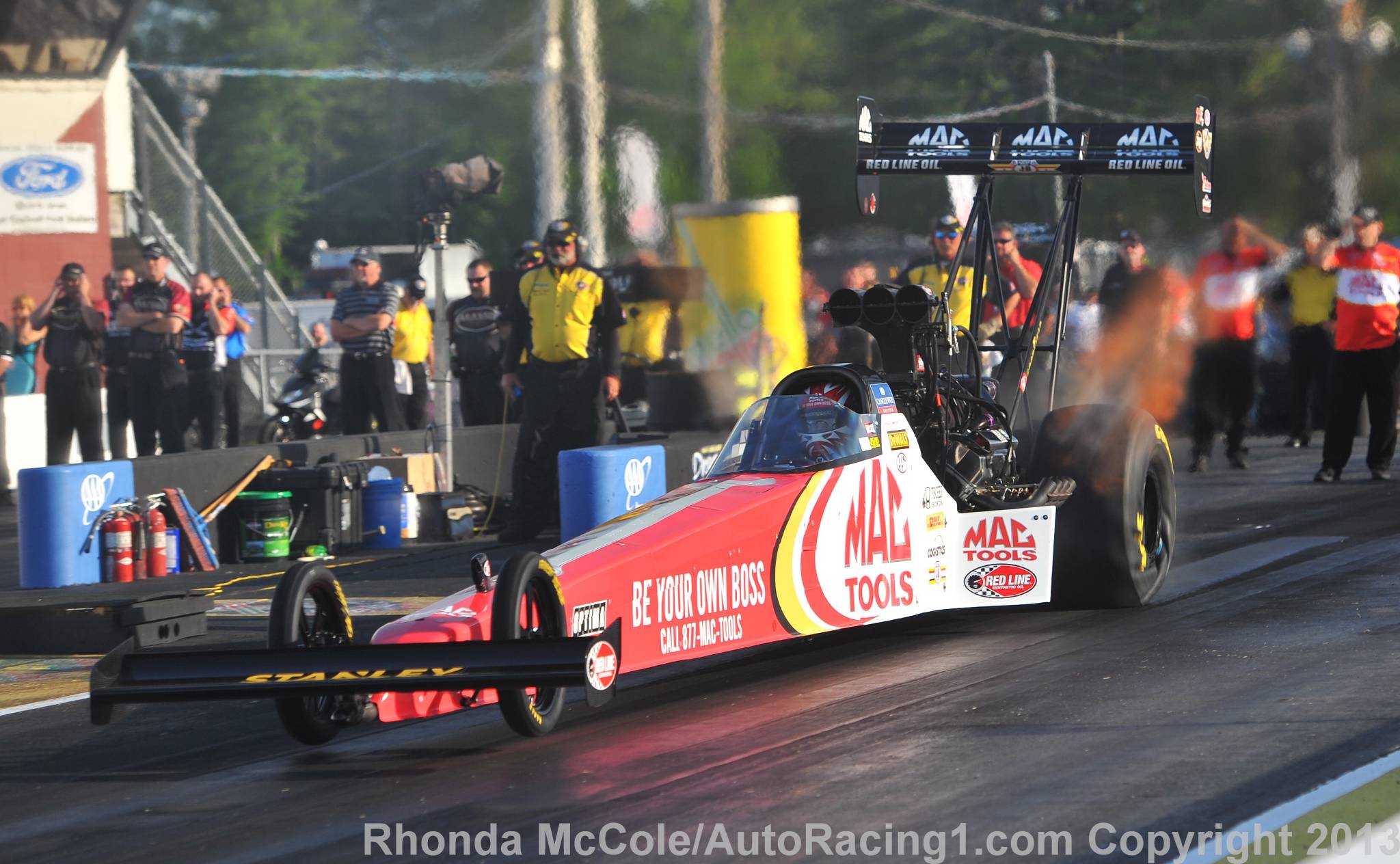 Barely a week after going to the winner’s circle to end a 31-race winless drought, 15-time NHRA Funny Car champion John Force was back on top again as he secured the no. 1 qualifier spot in Saturday’s qualifying sessions for Sunday’s Inaugural Auto-Plus NHRA New England Nationals at New England Dragway in Epping, N.H.

Cool New England temperatures made for ideal track conditions during Friday’s sessions, but as qualifying shifted to the afternoon and the track heated up, most drivers stood pat on their earlier qualifying times and only a handful of spots changed hands in the final two rounds.

Riding the momentum from his thrilling victory last Sunday at Bristol, Force picked up his 142nd-career top qualifier and second of the year, posting a low ET of 4.051 seconds at 313.44 mph

The only real drama in Saturday’s Funny Car qualifying was at the back of the pack as five drivers jockeyed for the final four spots. Mike Smith went up in smoke in the final session and lost out to Dave Richards, who will take on Force in round one on Sunday.

Fresh off his first win of the season at the last Pro Stock Motorcycle event at Englishtown earlier this month, Michael Ray turned in the best qualifying effort of the weekend to score his first career no.1 qualifier.

Ray improved on his time from Friday to go from third to first, running 6.832 seconds at 197.05 mph to bump Matt Smith from the top spot. Hector Arana, Sr. bettered his time but his position remained unchanged, holding onto second with a pass of 6.838, 195.65.

“There’s not a lot of people in NHRA history who have sat on the pole in the Pro Stock Motorcycle class and now I can add my name to that list," said Ray. “I have always been the underdog and I have loved that position. Now I don’t mind to be able to stick my chest out a little bit and know that we have a really fast bike and that we will have to be someone to contend with for the rest of the season."

In Top Fuel, Kalitta earned his fourth pole of the season and 35th of his career with a quick pass of 3.795 seconds at 323.97 mph in Friday’s session to jump from ninth to first and knock David Grubnic out of the top spot.

“We struggled a little bit today getting down the track," Kalitta said. “We tried this other blower that we have on that second run, and it definitely showed some sign there that it might be OK for us. All in all, I think we should be ready for tomorrow. We would have liked to have gotten down the track on that last qualifying run, but it will be alright. We’ll just go back to what we know, and go A to B."

With only 16 entries in Top Fuel, everyone made the show. Ike Maier took the bump spot to face Kalitta in the opening round on Sunday.

In Pro Stock, Jeg Coughlin brought Mike Edwards’ top-qualifier streak to an end on Saturday, clocking in at 6.533 seconds at 212.43 mph for his second pole of the season and 19th of his career.

Coughlin has been the only driver to top Edwards in qualifying, ending Edwards first streak of five-straight to start the season with a top qualifying effort in Houston in April.

Only 15 Pro Stock drivers made the trek to New England so there were no non-qualifiers. Erica Enders-Stevens, who entered the week fourth in points, was not entered in this weeks event.