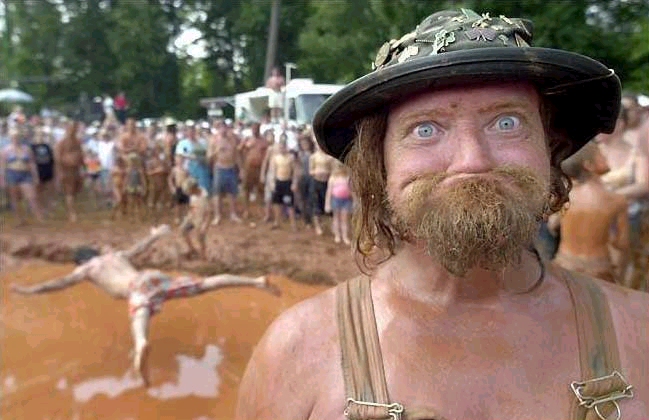 Recently NASCAR Willie, my favorite redneck racing buddy, called me saying that he wanted to express some thoughts regarding the NASCAR Sprint Cup weekend at Michigan. He told me he needed my help with the basic essentials such as nouns, verbs and commas. He also said: "I have no idea what a dangling participle is but there's no way in hell I'm touching one."

I quickly realized the man had some rather interesting observations about NASCAR racing and I agreed to help him out. So, for better or worse and for richer or poorer, here's "NASCAR Willie's Racing Lines."

"As a general rule I usually don't pay a lot of attention to TV commercials during a NASCAR race. That's my time to make beer runs to the kitchen or hot laps to the bathroom between beer runs."

"However that new Mobil 1 Oil commercial starring Tony Stewart and that foreign dude did catch my eye."

"I was pretty impressed with Tony Stewart doing that split all the way to the floor."

(Note: the rest of us are reasonably sure that Tony's split was computer generated).

I loved the ending when Tony dunked an Oreo cookie in a glass of soda pop. I've got to try that 'soda cookies' deal."

"I wonder if Mr. Rick Hendrick might be interested in selling some of those used cars he brought home from Michigan? If I can get my hands on the parts and the pieces they need I can probably sell those cars for a pretty penny. Until I can get them fixed up and ready for market, they would look pretty cool sitting in the front yard."

"I've been rooting for Denny Hamlin, to make the Chase line up, ever since I heard about him missing races due to back surgery. He didn't seem to have any luck at all at Michigan. The TV people said his car was 'evil loose.' Hey, when you have to come to pit road to change a right front shock that's not evil loose. That car was possessed by the devil. Frankly, there's a garbage truck that comes by the house on Monday mornings that handled better than this race car. This team needs a FED EX special delivery right now if they're going to make that championship run."

"During the TNT Network broadcast, Jimmie Johnson was racing hard with Jamie McMurray. One of the TV people said: 'Johnson is eating McMurray's lunch.' It's a good thing that McMurray's car is sponsored by McDonalds. By the way, you can still get one dollar chicken mcnuggets at Mickey-D's on Tuesdays."

"I was very happy to see Greg Biffle win at Michigan. I was happy for team owner Jack, 'the cat in the hat' Roush. I was also very happy to learn that Ford had won its 1000th NASCAR race. Now that I think about it, I might have a couple of Fords parked in the back yard. I'm not sure, I haven't had much time for cutting the grass lately."

"After watching Biffle and Ford's performance during this race, I am now absolutely sure of one thing: F-O-R-D no longer stands for Found-On-Road-Dead."

"I hope you guys enjoyed Father's Day as much as I did. On Sunday morning the wife presented me with a case of my favorite suds, a bucket of chicken and 24 hours of absolute power over the TV remote control. When the kids realized that it was going to be a full day of TNT racing and SPEED Channel highlights they were less than thrilled. But when they found out about my plans to spend Sunday night watching a marathon of 'Duck Dynasty" they were seriously pissed."

"We should do this Father's Day thing at least once a month."