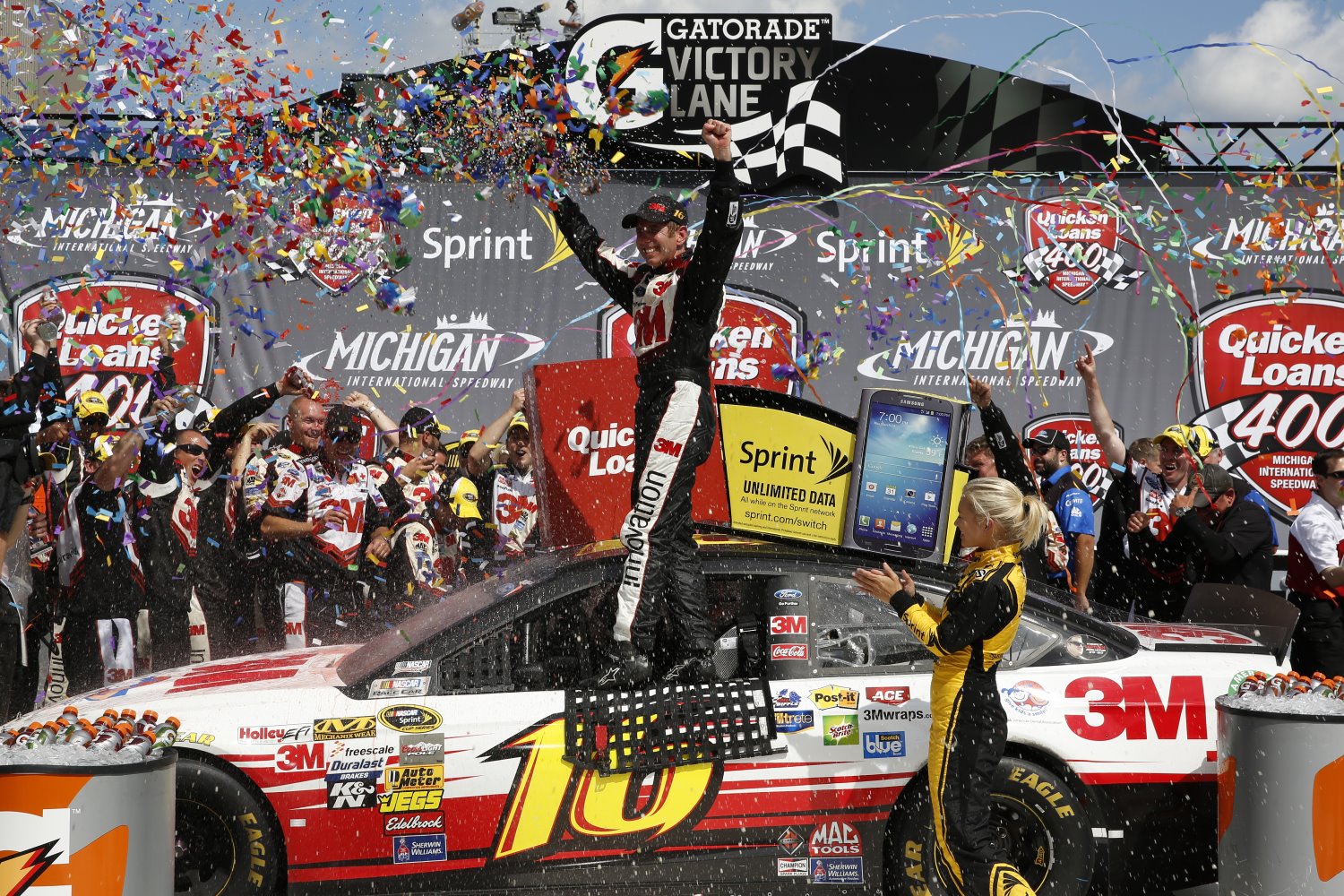 He took the lead for good on a late restart and ran away from the field in the closing laps to win Sunday's Quicken Loans 400. The No. 16 Ford driver won his second straight race here and the 19th of his career. Four of those victories have come at MIS.

"It's definitely a special day," Biffle said after delivering Ford Motor Co. its 1,000th victory in NASCAR's three national touring series. "Just super-excited for Ford and sure excited to be No. 1,000."

The win secured Biffle a berth in the 2014 NASCAR Sprint All-Star Race and moved him up a spot to eighth in the standings.

Second a week ago at Pocono, Biffle led the pack to the restart on lap 173 and outran Martin Truex Jr. to stay out front. He led a race-best 48 laps.

Owner Jack Roush's operations center is in suburban Detroit and he considers MIS his home track. He was beaming almost as broadly as his driver.

"We expect to be at our best when we come to MIS and I am glad we could pull it off," Roush said. "I was a little nervous for a minute there, but I am glad it worked out and glad we could give Ford its 1,000th win."

Sprint Cup Series points leader Jimmie Johnson was gaining on Biffle in the final laps but a cut right front tire took him off the track with two laps to go.

Johnson took second a few laps before his misfortune and Harvick backed out of the throttle to hold on to at least a third-place finish.

"It was the third set of tires we had and they felt a little wobbly," he said. "We just wanted to hold our track position."

Biffle still was impressed with Johnson, whom he finished second to a week ago at Pocono.

"We beat the 48 today and that says a lot. He was really, really fast."

Johnson ended the day 28th to wrap up a tough day for Hendrick Motorsports. None of the racing giant's four entries cracked the top 25.

Pole winner Carl Edwards, who trailed Johnson by 51 points at the start of the race, cut 20 points off the deficit by finishing eighth.

Dale Earnhardt Jr. took the lead near the halfway point and appeared strong, but a blown engine ended his race on lap 131.

"It made a lot of damage there when it broke," he said after leading 34 laps at the track where he ended his 143-race dry spell a year ago. "I'm not sure they're going to be able to figure out what happened."

Jamie McMurray led 21 laps but fell out of contention when he blew a right front tire on lap 167.

The day's worst-looking wreck came shortly after the midway point when Kasey Kahne struck the wall near turn 2. The car caught fire as Kahne was getting out, but he stuck his arm back inside to trigger the fire-suppression system. He was not hurt.

Kurt Busch started on the outside of the front row and led the first 21 laps but spun and smacked the turn 2 wall two laps later.

Stewart ran his streak of top-seven finishes to four straight races and jumped from 13th to 10th in the standings.

There were showers after Saturday's Nationwide Series race and NASCAR gave crews a competition caution 20 laps in to assess tire wear on the clean surface.

The Sprint Cup Series continues next Sunday when drivers run the first road course of the season in the Toyota/Save Mart 350 at Sonoma (Calif.) Raceway.