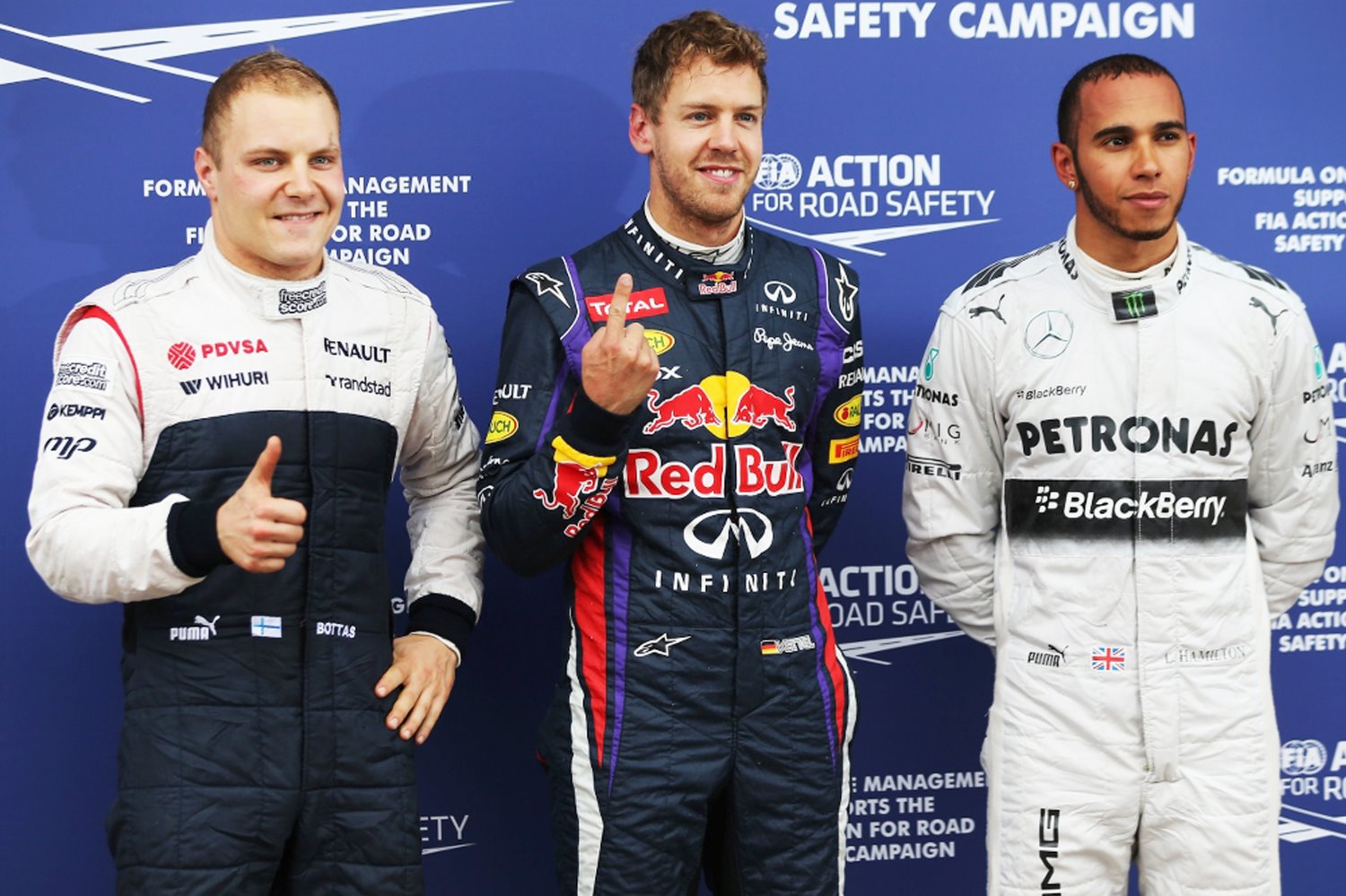 Q: Sebastian, you seemed to be on top of those extraordinary conditions all the way through qualifying. Was that the case?

Sebastian VETTEL: Well it was very, very tricky, especially because you never knew what the conditions were like the next time you were out. So obviously it was intermediate tires throughout but extremely tricky to adapt, especially in the last qualifying section. We decided to have two runs, we thought the second run will be quicker because we had a new set of tires left but it started to drizzle, in the last sector in particular, in the last chicane. I went straight on one lap and then the second lap I had a mistake somewhere else, so it turned out that the conditions were best for the first run. So that was a bit of a surprise because obviously you target on a set of new tires to push a little bit harder. Very happy the first lap was good enough. It was very tight with Lewis. I think at the end everybody was improving in the first two sectors but then the last one was… yeah, those last two corners didn't allow anyone to go quicker, which surely I didn't mind but I think it was showing how difficult the whole qualifying session was for everyone. Congratulations to Valtteri, I think he did an extraordinary job putting the Williams on P3 but for us, extremely happy with the result and looking forward to the race tomorrow. I think we had strong pace yesterday so no matter the conditions, we should be in decent shape.

Q: Lewis, is that what cost you right at the end? Was that the rain in the final sector?

Lewis HAMILTON: I don't know really… no, I was doing a pretty good lap, I think I was six or seven tenths up, even so I went wide. I don't know whether I would have kept it but all I needed to keep was a tenth or so, a bit unfortunate – but I'm still happy to be here for the team.

Q: Valtteri, congratulations. What does this mean, to be in the top three?

Valtteri BOTTAS: Thank you. Of course it means a lot. It's way more up in the grid than what we really could ever imagine. It's been so difficult, the first six races for us and it will be a nice boost for the team. We really got everything quite right today.

Q: Sebastian, as you say, no points today. What chances tomorrow? As you said, you don't really fear any of the conditions. Are you worried about rain or not?

SV: Well, I don't know if there's anybody who can give a precise forecast for every corner. As we saw today, it was really tricky in some places, then drier than expected in other places and the next lap was completely different. So, yeah, a bit difficult to foresee how the weather is behaving tomorrow – but the forecast, I think, looks a little bit friendlier than today. So at this stage – the last thing I heard at least – we expect dry conditions. But we'll see. It doesn't really matter. We have a couple of tires left, surely lots of slick tires but also in the rain we should be in decent shape. I think it could be an interesting race with mixed conditions tomorrow. So, a long one, 70 laps here and a lot of things that can happen in every single lap.

SV: No, we don't have a new set left but obviously it was only a very short run in the last qualifying. I think the sets we used, one was completely new and the other just scrubbed, so yeah, I think it's tricky. Everyone used up their intermediates to qualify as high up as possible but the bottom line is I think we're in good shape regarding tires for both dry – obviously, just like everyone else – and rain conditions.

Q: It did seem to be an extraordinary session. You had mass starts in the pitlane. It was amazing!

SV: Yeah. I wasn't part of that group and actually I did a mistake there because I was too late getting out in Q2 after the red flag, after Felipe had the crash. Yeah, I didn't want to join the train and get stuck but obviously we left a little bit too late and I didn't get to do a timed lap at all. Fortunately I made it through to Q3. The time we set before was good enough – but we didn't get a run in and we were supposed to, so yeah, I messed up the timing a little bit there but fortunately it didn't cost us anything.

Q: Lewis, did it all go according to plan? Maybe you felt you could have been on pole.

LH: Pole was definitely there, so it's a bit unfortunate but that's the way it goes.

Q: Did everything go according to plan?

Q: Is that what makes you a little unhappy then?

Q: What are the chances tomorrow? What do you feel about the weather tomorrow?

LH: I've not really seen what the weather's going to be like tomorrow. I was told that it's going to be dry – or maybe raining in the morning and drying out for the race. But, as Sebastian said, it's changing and it's going to be good fun. It should be interesting as it has been for the last few years. It's been very tricky – but I hope it's dry.

Q: Valtteri, what do you want tomorrow? More rain?

VB: Definitely! I think the fact is in the dry the car doesn't belong to P3 at the moment, so yeah, of course some rain would help us like it did in the qualifying. Because I think we found, for the Inter tires especially, a quite good way of how to really work the tire, the right temperatures and everything – so I hope so.

Q: You did a good job in Monaco keeping it out of the wall – a lot of rookies might have ended up in the wall. You've done the same thing here. You've been a pretty safe pair of hands as far as I can see. Do you feel that? Are you happy with your performances?

VB: I think you can never be totally happy with the situation we are in. I still have zero points and there's still a lot to learn. When I look back there's so many things you always could have done better. It's been OK but it could be always better.

Q: (Heikki Kulta – Turun Sanomat) Valtteri, congratulations. Would you have ever dreamed to be on the second row and also could you please describe your lap?

VB: Thank you. I don't think we expected to be on the first or second row. I think everyone in our team was hoping for rain because there's always a chance if you get the timing right, get everything right, you can maybe finish a bit higher than where the car is sometimes. But yes, the race is tomorrow. If it's dry, for sure it's going to be difficult, it's not going to be easy, so let's see.

Q: (Kate Walker – GP Week) Valtteri, we've seen that you're ten places ahead of your teammate. Is this because you like the track, you like the conditions? You're both in the same car.

VB: I think today was very tricky and it was a lot about the tire getting a good lap, just at the right time, when the track is in the best condition, having good track position, everything, so it's not as simple in this weather, so that's why there can even be ten places between teammates.

Q: (Stefan Barbé – L'Equipe) If it's dry tomorrow, do you think you had enough time yesterday to evaluate the tires for long run pace in the afternoon?

LH: We did a long run like everyone else, so we have a good understanding what the tires and the car feels like in the dry and obviously we've had the rain and the wet so we should be set for tomorrow.SV: I think it was good that practice two yesterday was dry so it allowed everyone to get a read on both soft tire and the harder or the medium tire, supersoft and medium.

VB: I think everyone has plenty of dry tires so we'll see.

Q: (Massimo lopes Pegna- La Gazzetta dello Sport) Sebastian, are you surprised to see Ferrari so far behind you?

SV: I don't know where they are but obviously I saw Felipe losing the car into turn three so I'm aware that he's not very high up. He obviously didn't take part in Q3. For Fernando, I don't know where he starts but I think generally – as Valtteri touched on – it was quite tricky today and when you were not on the circuit at the right time, then you can be faster than everybody else, for example, but it's not happening. I think we've all experienced it to some extent today. Some, obviously… on average, I think us three up here, we got away with it and mostly used the track in the best condition but you can never really say that you have always been out when it was absolutely at its best, and that makes a big difference. We're talking easily half a second, a second, two seconds per lap.

Q: (Bill Beacon – Canadian Press) Lewis, you've won here three times, conditions are a lot stranger this time around; how confident are you that you can have a fourth victory here?

LH: Well, it's good to be on the front row, that makes it a little bit… brings up the chances a little bit but it's going to be a tough race tomorrow. Obviously Sebastian's very quick, even the Ferraris are very quick on the long runs so I guess it really depends on the conditions and at the end of the day I've got to do the job. As you know, I love it here so, there's a great crowd even though the weather was not so great today. I'm sure there will be even more people tomorrow so let's hope we can put on a good show for them.