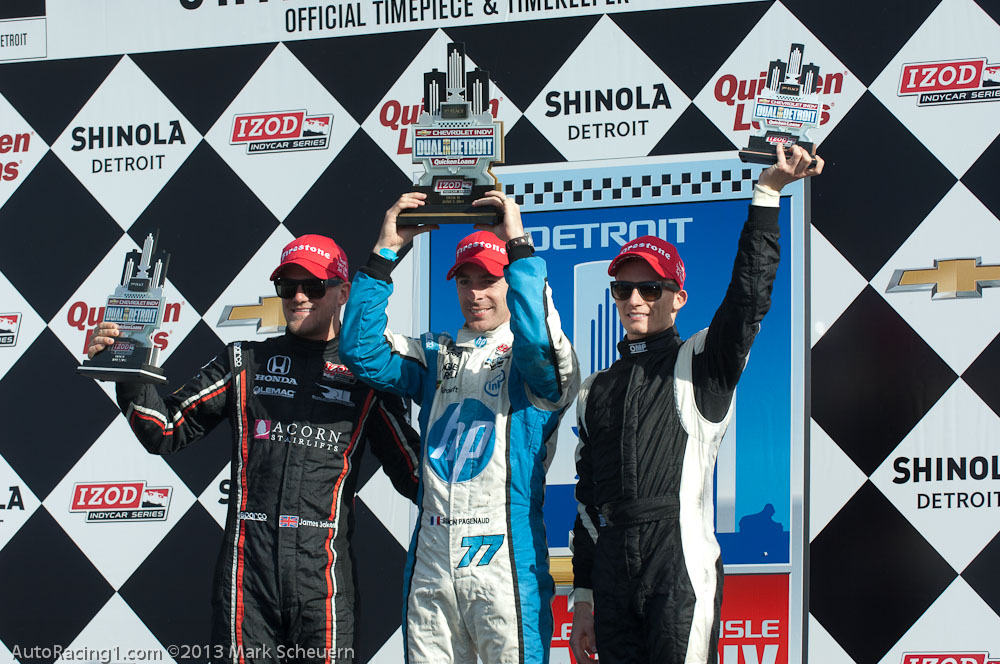 Schmidt Hamilton Motorsports' Simon Pagenaud scored his first career Izod IndyCar Series victory today in race 2 of the Chevrolet Belle Isle Grand Prix of Detroit on the 2.3-mile temporary street circuit, and leading a Honda first-through-fifth sweep. Following the fast Frenchman was James Jakes, who finished a career best second. Mike Conway, who started from pole and won Saturday's first race, was unable to find the speed in the final stint to mount a challenge for victory.

In a race where a flurry of early cautions resulted in a variety of pit strategies, Simon Pagenaud and his Schmidt Hamilton HP Motorsports team played the game to perfection.

Coupled with a win by Honda-powered Mike Conway in Saturday's weekend opener, the weekend results moved Honda back to within three points from the lead in the 2013 IndyCar Manufacturers' Championship, after seven of 19 races.

Starting sixth on the alternate "red" tires, Pagenaud moved up to third behind Saturday's winner Conway, as a total of six caution periods repeatedly interrupted the action during the first half of the 70-lap contest. During a caution on Lap 20, Pagenaud made his first scheduled stop and was fitted with the more durable "black" sidewall primary tires.

A long middle stint saw Pagenaud cycle to the front of the field as the race ran caution-free from Lap 37 to the finish. He built a massive lead of more than 20 seconds before his final pit stop, allowing him to resume in second place behind fellow Honda driver James Jakes. On a similar strategy, Jakes made his final stop three laps later, promoting Pagenaud into a lead he would hold to the finish.

Jakes, in turn, fought off a determined challenge from Honda-powered Saturday race winner Conway in the final laps to claim a career-best second place, while Conway capped off a surprisingly competitive weekend as a last-minute replacement driver at Dale Coyne Racing by finishing third.

Conway is the only driver to finish both races this weekend on the podium.

Driving the No. 18 Sonny’s BBQ car for Dale Coyne Racing, Conway kept his head during the multiple cautioned race today. On the first lap, which quickly became yellow, he slipped back to second but re-gained on the restart and the following four after that. He lost the lead under the fifth yellow (lap 28) due to a routine pit stop but soon took it back again on lap 40. However as his red tires started losing grip, he lost positions and switched back to black on his final stop. He began battling his way back to the front almost immediately, passing two cars in one turn and with five laps to go, fought hard with Jakes for second place but just came up short. Conway not only led the most laps today, 31, but also the fastest lap of the race, 77.4371 seconds, which was faster than his pole winning lap yesterday.

Talking about his strategy after the last pit stop, Conway said, “I pushed really hard at the beginning and that may have taken a little bit out of the tires but they still felt pretty good towards the end. I was catching James Jakes and could see he was on reds, so he started to pull away initially when he first left the pits. I thought his tires would wear out towards the end, and they did, so I used my overtake, the only one I had left but maybe a lap to early. I couldn't quite get close enough."

He then went on to say about the physicality of the track, “It was tough. You're pushing maximum effort all the time. Especially on the restarts. You have no time to relax. But you know, I feel good. Adrenaline is pumping. But I'm sure I'll be sh

Although on different pit strategies, Target Chip Ganassi Racing drivers Scott Dixon and Dario Franchitti ran together during the final 10 laps, as Dixon caught and passed a fuel-saving Franchitti, who completed a sweep of the top five finishing positions for Honda. In the third Chip Ganassi Racing entry, Charlie Kimball had another strong run, leading three laps en route to a seventh-place finish.

Helio Castroneves overtook Graham Rahal on the final laps for eighth place, gaining the extra point to retain the championship points lead. He's tied at 206 with Marco Andretti, who finished sixth, heading to the Firestone 550 on June 8 at Texas Motor Speedway.

A.J. Allmendinger had a rough weekend in the Motor City. The Penske Racing driver crashed on the opening lap for the second straight day at the Detroit Grand Prix.

He was in a pack of cars when he hit a wall Sunday, saying he made a mistake. Allmendinger also took the blame for getting squeezed between two cars in a crash Saturday.

"It's the start of the race trying to be aggressive," Allmendinger said.

SIMON PAGENAUD (No. 77 Schmidt Hamilton HP Motorsports Honda): “There were a lot of things going on in the cockpit in the last two laps, I can tell you that. It’s unbelievable. I don’t know how we did it. The car was mega fast. The HP team did a fantastic job. Honda has been amazing. I certainly had more horsepower than anyone else out there right now. Thanks to everybody. I want to thank my family and everybody around me. This wouldn’t have happened without them. Man, it’s a great feeling. One I hope of more to come."

JAMES JAKES (No. 16 Acorn Stairlifts Honda): “It’s huge. It’s huge for a lot of people. The Rahal Letterman Lanigan guys have done a great job this weekend. This one is for Honda. Three Hondas on the podium in Detroit again. They’ve really worked their butts off since Indy, and we’re proud of them. The No. 16 Acorn Stairlifts-StemCyte car was just magical today."

MIKE CONWAY (No. 18 Dale Coyne Racing Honda): (On strategy after last pit stop) "Just driving flat out. As fast as it would go. I pushed really hard at the beginning and that may have taken a little bit out of the tires but it was still good towards the end. I was catching James [Jakes], I could see he was on reds, so he started to pull away to start with when he came out to start with from that last pit stop. I thought they may go out until the end, and they were, and I used my overtake, the one I had left, maybe a lap to early. And that was enough. I couldn't quite get close enough." (On the physicality of the track) "Yeah, it was tough. You're pushing maximum effort all the time. Especially on the restarts. You have no time to relax. And even with the breaks with the safety car, you know of need that little breather to get your heart rate back down. But you know, I feel good. Adrenaline is pumping. But I'm sure I'll be shattered tonight."

JUSTIN WILSON (No. 19 Dale Coyne Racing Honda): “Something happened up ahead, and I was going into the corner on the outside of Charlie (Kimball), and I couldn't see because the rear wing is so big and everyone just stopped. And it was just a road block. The complete track was blocked from where I was. I hit the wall trying not to run into anyone. It's a disappointing day. Had a good race car. Seems like everyone is getting a little crazy today. Yesterday was nice and calm, but today was crazy."

AJ ALLMENDINGER (No. 2 Quicken Loans Team Penske Chevrolet): “(Did your thumb affect his crash?): “No, that’s just a poor excuse right there. It was just a huge mistake by me again. Start of the race, trying to be aggressive, not kind of get sucked into everything and just made a mistake again. I don’t know what to say, I apologize to Roger, everybody at Team Penske, Quicken Loans, everybody that puts in the effort, all my guys, it’s embarrassing, honestly. It’s embarrassing for me. Roger deserves better than that, the sponsors, it’s just a great event here in Detroit, Bud Denker and everybody put on such event. I don’t know where I go from here. I’m heartbroken, I don’t even know what to say anymore. Hopefully Will and Helio can go win this thing, Roger deserves it. I feel so lucky that he believes in me and that’s not even close to how I want to repay him. We’ll figure out where I’m going to go.

SCOTT DIXON (No. 9 Target Chip Ganassi Racing Honda): “It wasn’t as physical as yesterday’s race with the caution periods and everything. It was still a grueling day and we had a few issues with the car with the shifting and then toward the end when we were on red tires something broke in the suspension. It wore a big hole in the car so I’m just happy the Target car finished where it did today."

DARIO FRANCHITTI (No. 10 Suave Honda): “Our day was pretty crazy. We took a very aggressive strategy on the Suave car. We had to make some serious fuel mileage at the end which was frustrating for us because we were really fast. We just had to make that fuel mileage because another trip to the pits would have sent us way back there. We struggled a little bit on restarts to get going and I was thankful to be out in front of that big crash. It was a pretty interesting day at the office."

Results Sunday of the Chevrolet Indy Dual in Detroit presented by Quicken Loans #2 IZOD IndyCar Series event on the 2.35-mile Raceway at Belle Isle Park, with order of finish, starting position in parentheses, driver, chassis-engine, laps completed and reason out (if any):