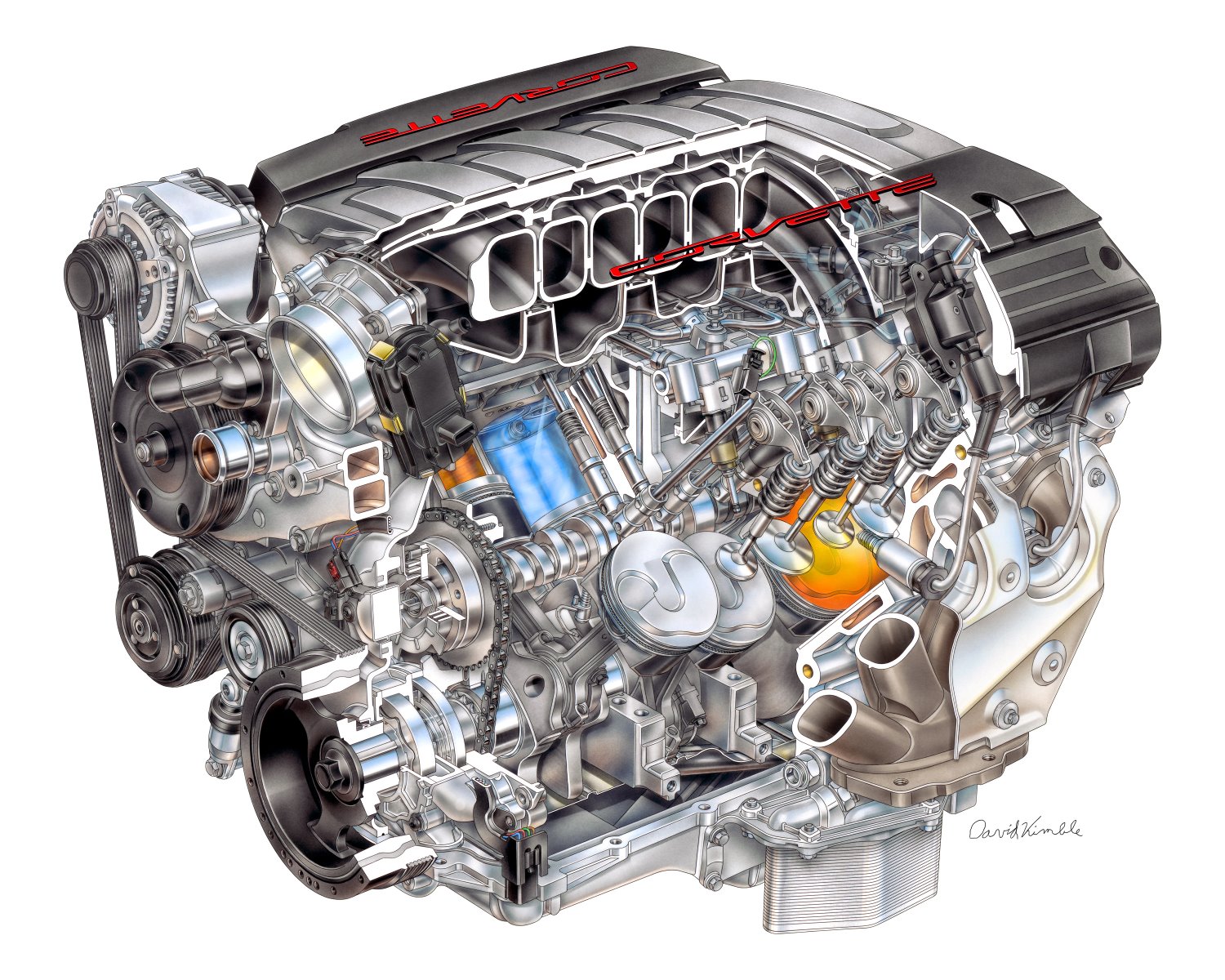 The Stingray is SAE-certified at 455 horsepower (339 kW) and 460 lb-ft (624 Nm) with the standard exhaust system. They are the highest standard power ratings ever for the Corvette, delivered with efficiency that is expected to exceed 26 mpg on the highway.

“The 2014 Corvette Stingray’s LT1 engine is a triumph of advanced technology, delivering more power and torque than ever before with greater efficiency," said Jordan Lee, Small Block chief engineer.

“The LT1’s performance complements the Corvette’s low mass with a tremendous feeling of power that builds as the rpm climbs. Drivers will experience more power and acceleration than ever before with the standard engine – in fact, its power and torque surpass many uplevel engines offered by competitors."

At 74 horsepower per liter, the LT1 has greater power density than the C6 Corvette’s LS3 6.2L engine and even the C6 Z06’s racing-derived 7.0L LS7. It also produces comparable torque to the LS7 – up to 4,700 rpm – and its peak torque is within 5 lb-ft of the 7.0L engine. That torque is generated early and sustained across the rpm band, with 316 lb-ft available at only 1,000 rpm and 90 percent of peak torque available from 3,000 rpm to 5,500 rpm – giving the lightweight Corvette Stingray excellent acceleration at all speeds.

Chevrolet estimates the Corvette will run from 0 to 60 mph in less than four seconds.

Direct injection is a primary contributor to the engine’s combustion efficiency, ensuring a more complete burn of the fuel in the air-fuel mixture. That’s achieved by precisely controlling the mixture motion and fuel injection spray pattern. Direct injection also keeps the combustion chamber cooler, which allows for a higher compression ratio. Emissions are also reduced, particularly cold-start hydrocarbon emissions, which are cut by about 25 percent.

Active Fuel Management, or cylinder deactivation, is a first-ever application on Corvette. It helps save fuel by imperceptibly shutting down half of the engine’s cylinders in light-load driving. Continuously variable valve timing is refined to support the LT1 AFM and direct injection systems to further optimize performance, efficiency and emissions.

These technologies support the all-new, advanced combustion system, which incorporates a new cylinder-head design and a new, sculpted piston design that is an integral contributor to the high-compression, mixture motion parameters enabled by direct injection.

The 2014 Corvette Stingray’s LT1 engine is the fifth generation of the Small Block engine family, which debuted in the Corvette in 1955. It displaced 4.3L (265 cubic inches) and was rated at 195 horsepower, drawing air and fuel through a four-barrel carburetor. Five years later, Small Block power helped Corvette secure its first victory at the 24 Hours of Le Mans.

The 2014 Corvette Stingray coupe goes on sale this fall, with a convertible following by the end of the year – each sharing an all-new aluminum frame structure and enhanced chassis, as well as completely new exterior and interior designs.