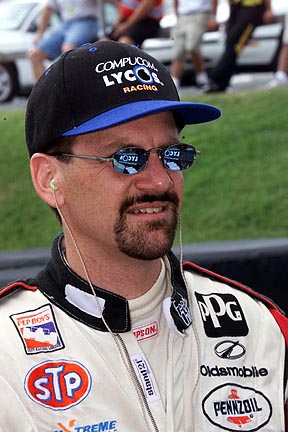 It was May 30, 1999 and John Hollansworth, Jr. had his hands full. Early in the 83rd running of the Indianapolis 500, his Oldsmobile-powered Dallara picked up a massive understeer condition. A car passed him on the inside. Caught up in the dirty air, Hollansworth's mishandling car brushed the wall hard in Turn 3.

He rejoined the race after a quick pit stop. Sam Schmidt spun in front of him and Hollansworth barely missed the wreck. The field slowed under caution. Coming up through the gears on the backstretch as the race went green again, the shifter froze in fourth gear.

Hollansworth manhandled the shifter but it wouldn't budge. There were still 150 laps left in the race. Hollansworth resigned himself to either a crash or a transmission failure, whichever came first.

Arie Luyendyk hit the wall a few car lengths in front of him, but Hollansworth again escaped the carnage. The clutch on the car was nearly used up and the car stalled on a late pit stop.

With just ten laps to go in the Indy 500, the engine picked up a severe vibration.

When the checkered flag finally fell, Hollansworth was physically wrestling the car around the track and had somehow managed a miraculous and downright heroic 13th place finish. The timing chain let go on the cool down lap and the engine destroyed itself. Hollansworth coasted into the pits.

It would prove to be his only appearance in the Greatest Spectacle in Racing. Hollansworth's sponsor was part of the “dot-com" bubble in the late 90's. When the bubble burst, his promising IndyCar career went down in flames as well.

Since we’re both part of the Mecum Auto Auction circuit, I see John on a fairly regular basis and am proud to call him a friend. He remains humble and soft spoken. You can talk with him for hours and he’ll never mention his thirteen IndyCar starts over three seasons, his top five finish at Texas in 1999 or his amazing Indy 500 experience. You have to ask.

During a commercial break in last weekend's live Mecum Auction telecast from Indianapolis, John and I chatted for a few brief moments about his days as an IndyCar driver, the 1999 race and the state of IndyCar today.

SC: Now that you’ve retired from IndyCar, is it hard to come back to Indianapolis or is it that much easier?

JH: It’s both. I confess to having stopped by there earlier this week when I should have been working. Took a few pictures and shook a hand or two. It’s still the greatest spectacle in the sport in my opinion; it’s really great. That part is easy. I’ll always be a fan of the whole month.

The hard part is, whether you’re Jimmy Connors at age sixty wanting to be on the tennis court, or a driver at whatever our age is, you still want to be out there. So that part of it is difficult.

SC: When you look back on your 1999 race today, are you satisfied?

JH: Yes. That was the best effort on my part. I’ve always said that I did the best I could do under the circumstances. I'm really sorry that I didn't get back and get a few more chances because I think we could have done a little better.

SC: Was the event everything you thought it would be, or were you just overwhelmed with it all?

JH: The event was everything I thought it would be. And yes, I was overwhelmed.

I remember distinctly sitting down that morning before the race began and (journalist) Dave Argabright was sitting with us in a group of drivers. It was right before driver introductions. I hardly knew where I was. I was just trying to stay focused on the task at hand. And we interacted with a little bit of dialogue and I'm sure he could see the uneasiness there. He probably knew my mind was elsewhere. I had pretty much checked out.

But yeah, the whole thing was really overwhelming.

SC: If someone handed you the keys to the entire IndyCar organization tomorrow, what would you do?

JH: You and I have had some conversations along this line, Stephen.

Tony George didn't have everything right in the IRL days, but he had some things right.

You and I were talking earlier today about engines that cost a million dollars or so per car. Six hundred horsepower is not that much. You and I could build that in our garage with a little work, even in a race configuration.

If you look at the field now, we've got 34 cars. That's not a Bump Day. In 1999 we had 45 legitimate car and driver combinations with twelve rookies, and four made the field. That's what Bump Day is about at Indy in my opinion. It's about the edge. It's about missing the show.

The IRL did some things right. We really did have more opportunities for American drivers. It really was less expensive to participate. And somehow when the two series came together, we lost some of that.

And now? Here we go again.

Fourteen years after hanging up his helmet, John Hollansworth has gone from one exciting line of work to another. He is now among the most talented automotive photographers in the country. He works with Mecum Auto Auctions, traveling from city to city and photographing rare and extraordinarily expensive muscle cars that are soon to be offered for sale.

Print out an old hero card from this ancient web site and catch up with him at the next Mecum auction in your city. John will be happy to autograph it for you.

But you’ll have to ask.