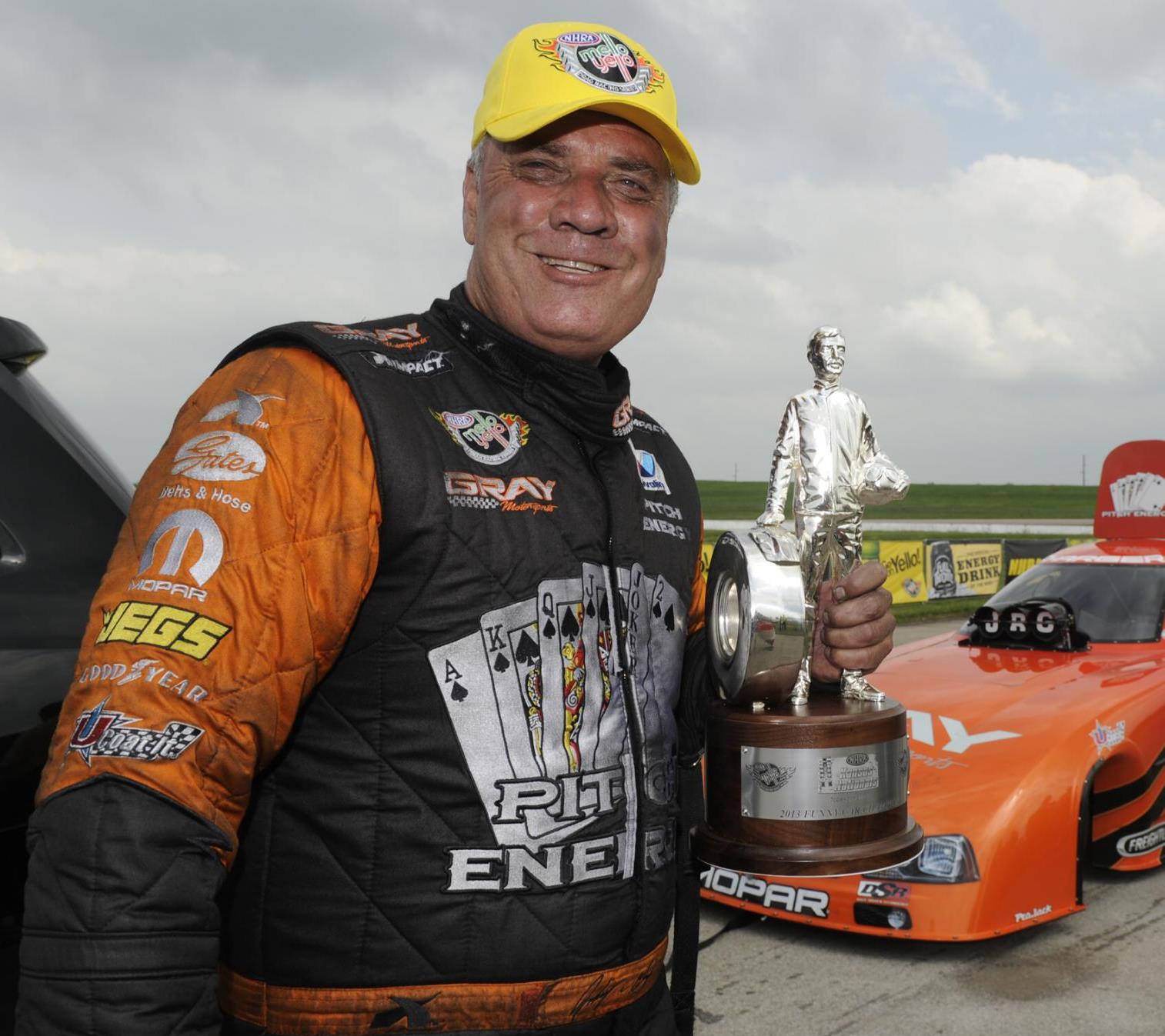 Johnny Gray raced to his third victory of the season Sunday and moved back into the Funny Car points lead at the 25th annual NHRA Kansas Nationals.

Gray took his first win at Heartland Park Topeka and the sixth of his career by outrunning Robert Hight in the final round. Gray drove his Pitch Energy Dodge Charger to a final round performance of 4.067 seconds at 314.90 mph, while Hight’s Auto Club Ford Mustang lost traction and slowed early in the run in his first final round appearance in more than a year.

“Rob [Wendland, crew chief] gave me a great race car that ran real hard all day," said Gray, who beat Alexis DeJoria, Del Worsham and defending event winner Jack Beckman in earlier rounds. “Sometimes you can win races on an intimidation factor and Rob had her tuned up to where she was a little intimidating today. Robert had a great race car too, but they just missed it a little bit. They have a great team over there. Our car went right on down through there. My guys are giving me a car I can’t screw up in right now."

For the first time in his career, Gray takes sole possession of the series lead. He holds a 10-point advantage over second place Cruz Pedregon. In his only other time at the top of the standings, Gray was tied for first with teammate Ron Capps after his win at Gainesville, Fla. in March.

"It's a long way before we start running for the championship, but if the car keeps running like it's running, then we've got as good a shot as anybody out there," Gray said. "The better the car is, the better it makes the driver look."

In Top Fuel, Langdon used the quickest time of the weekend to defeat his arch-rival Tony Schumacher in the final round and take his second win of the season. Langdon covered the distance in 3.750 at 324.20 in his Al-Anabi Racing dragster, while Schumacher’s U.S. Army machine trailed with a 3.781 at 327.27. All three of Langdon’s career victories have come with seven-time world champ Schumacher as his final round opponent.

“We haven’t quite been able to finish it out on Sunday," Langdon said. “[My crew] had the fire in their eyes today. They wanted to close it out. We didn’t want to go four races in a row feeling like we had a car that can win and not getting it done."

Top qualifier Langdon used a string of 3.7-second runs in earlier round wins against Pat Dakin, Steve Torrence and Spencer Massey. He saved his quickest run for last against Schumacher.

With the win, Langdon moves to second in the series standings, 34 behind leader Schumacher.

Coughlin broke a winless drought of more than two years by taking the Pro Stock victory over teammate Allen Johnson. Coughlin took the win light with a performance of 6.680 at 206.20 in his JEGS.com/Team Mopar Dodge Avenger, while runner-up Johnson finished in 6.698 at 206.57 in his Team Mopar Avenger.

“Any day you are hoisting a Wally at the end of the day is a good thing and it’s what you work for," Coughlin said. “Today was extra-special for several reasons. We hadn’t won in a couple of years. To finally get a Wally on Sunday is exactly what the doctor ordered. We have been working hard and trying to work smart, and today was our day and it felt fantastic."

Coughlin won from the fourth qualifying position and beat Greg Stanfield, Rickie Jones and Vincent Nobile en route to the victory, the 53rd of his career. He also joined the 500 round wins club, earning round wins 499, 500, 501 and 502. He is only the 12th driver in NHRA history to accomplish that feat.

Coughlin remains in second place in the series standings, but with the victory, cut leader Mike Edwards’ advantage to 76. Runner-up Johnson stayed in the third place, but also trimmed Edwards’ lead by about 30 points.

“This Pro Stock race has just begun to heat up," said Coughlin, a four-time world champ. “We are getting ready to go into a great stretch of races and I love where we are sitting."