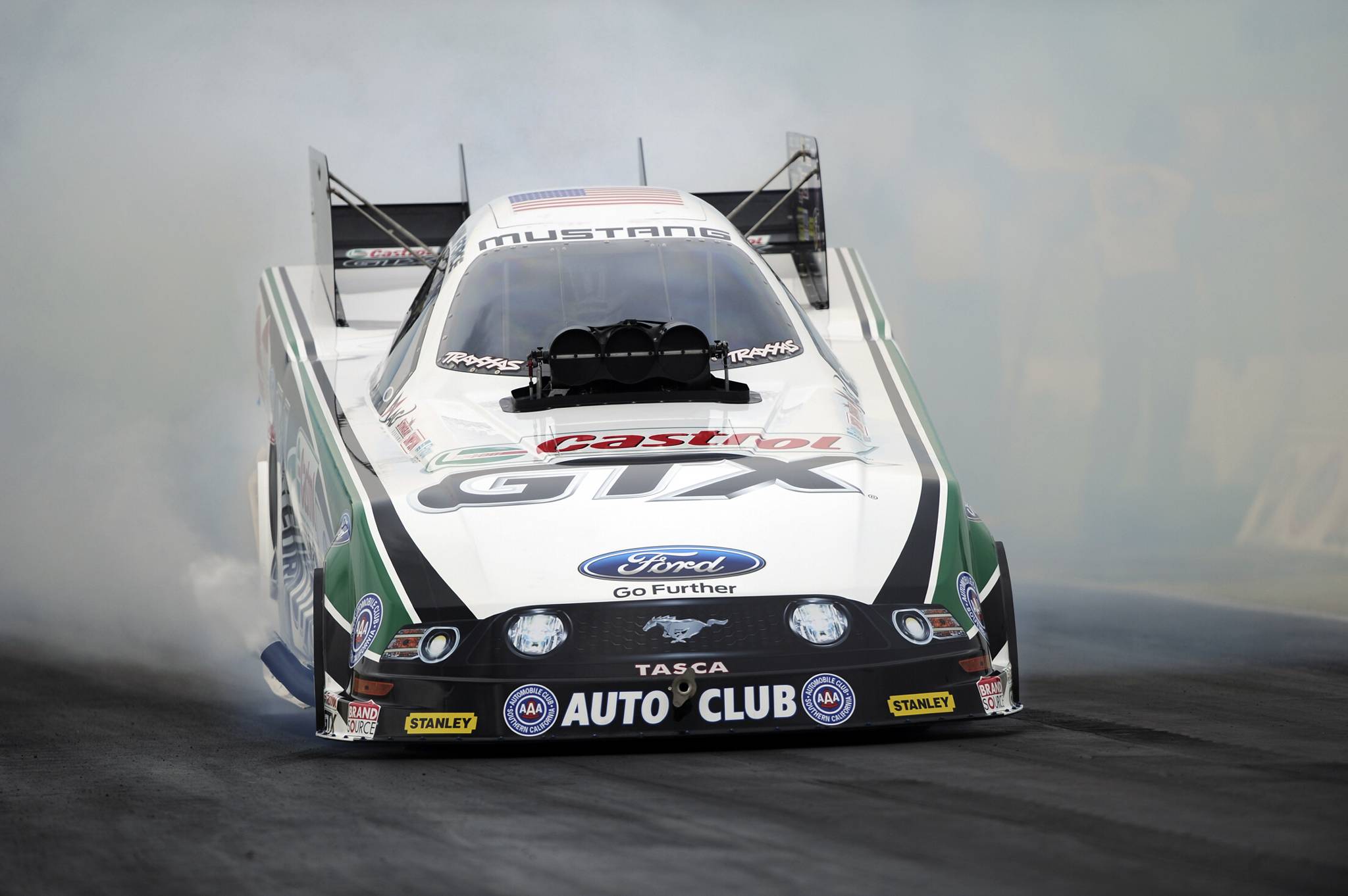 John Force ended a 19-race No. 1 qualifying slump by racing to a track record performance in Funny Car Saturday at the 25th annual NHRA Kansas Nationals.

Force, a 15-time NHRA world champion, claimed the 141st No. 1 qualifying position of his career and his 11th at Heartland Park Topeka by clocking a track record time of 4.043 seconds at 313.22 mph in his Castrol GTX Ford Mustang. He will meet former teammate Tony Pedregon in the opening round of racing.

“I’d like to take credit, but credit goes to the people," said Force, who has won nine of his NHRA-record 134 victories at Heartland Park Topeka. “It starts with [crew chief] Mike Neff. We’ve been struggling without a doubt. My dad always taught me that when you’re struggling, don’t change midstream and forget which way you’re going; that’s going backwards. The guys believe in me, and I believe in them. They’ve turned my car around."

Force’s daughter Courtney was second in her Traxxas Mustang with a 4.050 at 315.56 and will race Dale Creasy Jr. in the opening round. Friday top qualifier Robert Hight dropped to third, but improved on his time from yesterday, posting a 4.050 at 315.12 in his Auto Club Mustang. His first round opponent is Canadian Jeff Arend.

In Top Fuel, Langdon earned his third No. 1 of the season and ninth of his career with a performance of 3.767 at 322.50 in his Al-Anabi Racing dragster. He said team manager and tuning wizard Alan Johnson predicted the car would be very quick in the third session.

“We might have got that No. 1 qualifying position last night, but it kicked the rods out right before the lights," Langdon said. “We feel like we can get a little more out of it by working on our cylinder-dropping issue on the top end. The weather held out with the cloud cover today, and we felt that the third session was the session to really go for it."

Friday’s qualifying leader Tony Schumacher was second with a 3.769 at 326.08 in the U.S. Army dragster and will meet Houston winner Bob Vandergriff in the first round. Doug Kalitta qualified third in the Mac Tools dragster with a 3.770 at 324.98 and will face Morgan Lucas in the opener.

Edwards cruised to his seventh top qualifying position of the season in Pro Stock, and will race Steve Kent in the opening round. Edwards took his 48th career No. 1 and fourth at HPT with his Friday run of 6.618 at 208.55 in his Interstate Batteries/I Am Second Chevy Camaro.

“The air wasn’t as good for us today with a higher water count, and that really affects the Pro Stock engines," Edwards said. “They just don’t burn water very well. But even though it slowed us down and we had a problem with the transmission dead-heading the gears in the final session, we still ran very well against the rest of the field, and we’re looking forward to tomorrow."