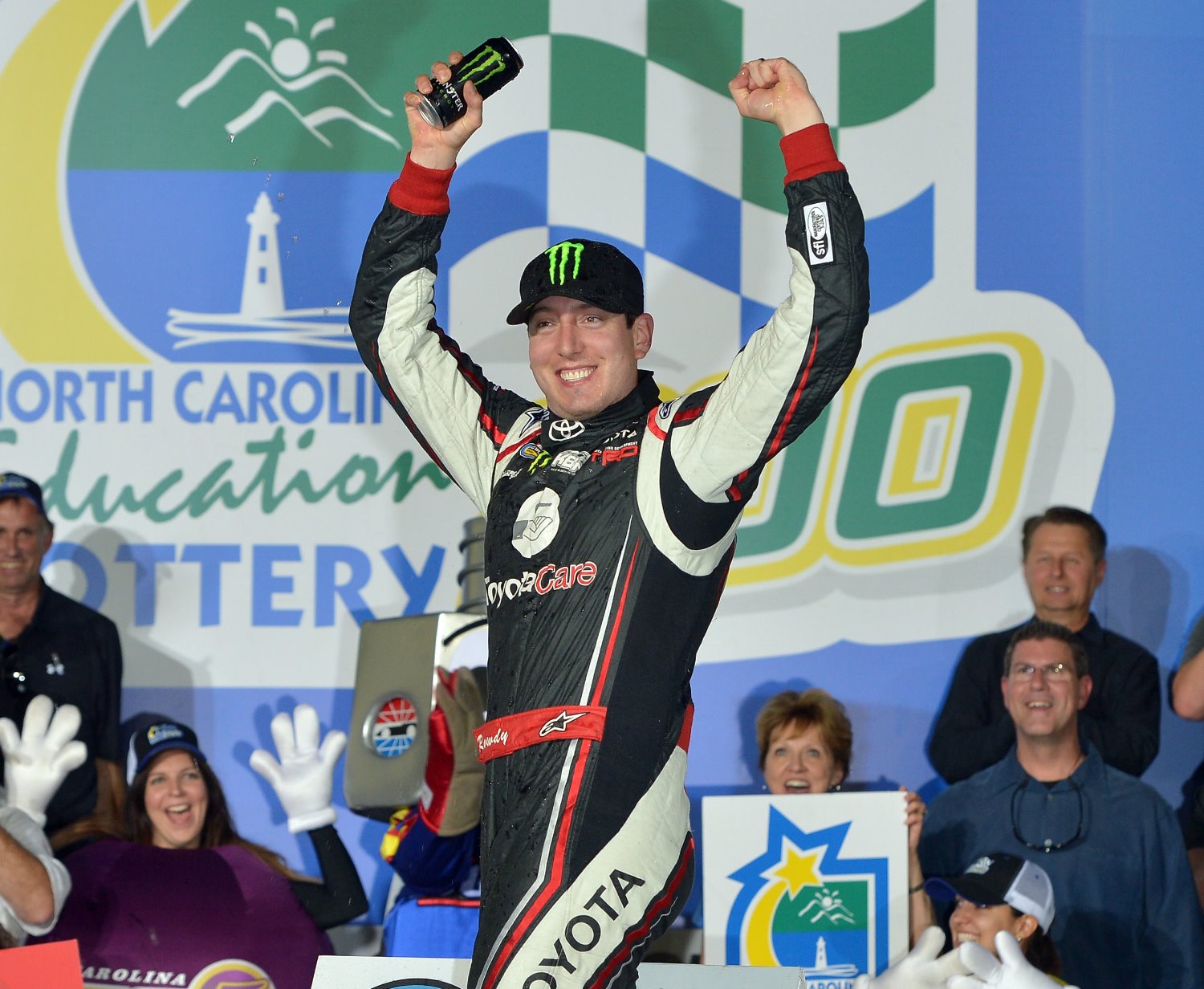 Kyle Busch rallied from a late-race penalty to charge back to the front of the field and score his first NASCAR Camping World Truck Series win of the season with a victory in Friday night's North Carolina Education Lottery 200 at Charlotte Motor Speedway.

Busch passed race leader Miguel Paludo following a restart with nine laps to go and then held off a late charge from Brendan Gaughan before finally sealing the victory – his first in his last seven truck series starts.

Busch's victory was the 31st truck series win of his career and his fifth in his last eight starts at Charlotte – a track where he has dominated in the Truck and Nationwide Series, but has yet to secure a Sprint Cup victory.

"I wish we could have led a few more laps tonight," said Busch. "It's fun to race here and we don't ever make anything too easy. It certainly was an eventful night for us. It's cool – we had a great truck tonight."

Busch's truck series win comes on the heels of a disappointing finish in the Sprint Cup race the previous weekend at Darlington, where he led the most laps but faded at the end of the race to finish sixth.
"Certainly, winning is awesome, but you never can get the ones that you lose back," said Busch. "The Cup Series stuff is what the Cup Series stuff is – you lead 265 laps or whatever it was and come up short at the end of the race, that's entirely frustrating and nothing is going to overcome that for you and make you feel any better."

Busch had the dominant truck for most of the night, leading 66 of the first 84 laps, but following a round of pit stops with 49 laps to go, Busch left his pit stall with the gas can still hanging from his no. 51 Toyota Tundra, resulting in a penalty that sent him to the rear of the field.

Undeterred and with four fresh tires, Busch battled back, and within 10 laps was back in the top ten.

Following another restart, Busch battled his way up to second behind Paludo before the caution flag waved for the eighth and final time on lap 123.

On the ensuing restart with nine laps to go, Busch got past Paludo on the outside with a push from Gaughan, who followed Busch on the high side into second place.

Gaughan slowly began reeling Busch in running the high line around the 1.5-mile quad oval, but Busch came up high just enough to take air of the nose of Gaughan's Chevrolet Silverado, slowing his momentum just enough to allow Busch to pull away and beat Gaughan by five truck lengths at the finish.

"I'm mad as hell right now," said Gaughan with a smile on his face. "That's why Kyle Busch is smart. He knows I like the high side, he knows these trucks all have an aero push, so he moved up to my groove for one corner of one lap and took the air off of my nose and just killed my momentum enough that I was only gaining on him again at the end. So great job by him. To come home second, this is our third top-5 in a row now, so I'm happy as I've been in a decade."

The third-place showing by Max Gresham was a career-best for the 2011 K&N Pro Series East champion in 21 series starts in the truck series, eclipsing his previous best finish of 11th last October at Martinsville.
"We couldn't be any happier with how tonight went," said Gresham. "It was a great run for us to night. We started off kind of far in the back and worked our way forward, and that last pit stop really just came to life. It was kind of humming there at the end.

"This is justification for us that we're going in the right direction, getting better every week. That's all we can ask for."

James Buescher was sixth followed by Paludo, John Wes Townley Ross Chastain and Justin Lofton.
Matt Crafton still holds the points lead going into the next truck series race at Dover. Rookie Jeb Burton – sat on the pole for Friday night's race – finished 13th and moved up one spot to second while Dillon took over the third spot followed by Gaughan and Buescher.