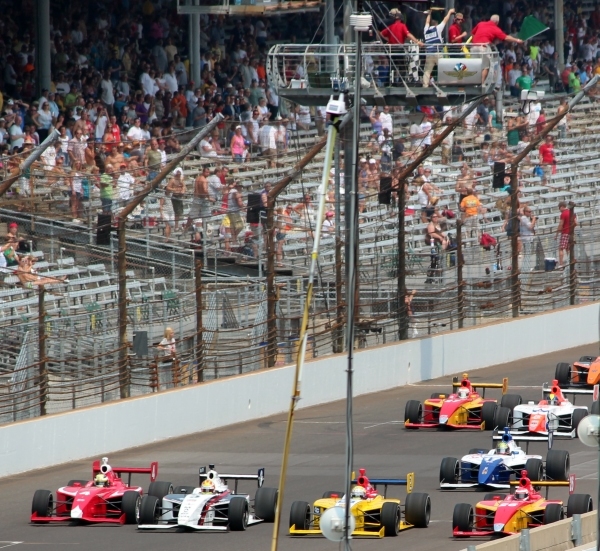 Imagine you’re in a McDonald’s restaurant. You order a Big Mac. The cashier plops your sandwich on the counter and says, “That’ll be six hundred and twelve dollars, sir."

“Uh… excuse me. Did you actually say six hundred and twelve dollars?"

You would probably respond, “They’re not that good!" and walk out of the restaurant.

No problem. My sponsors are reasonable people. They reduced the expected number of races to only two… the Freedom 100 and any other race of choice. And I had specific offers from three teams. But the sponsorship necessary to support a two-race deal ranged from $92,500 to $160,000.

Still, I was not dissuaded. I sent my resume to IndyCar and they approved me for the Lights series. A two-hour visit to the friendly folks at the Indianapolis Motor Speedway’s infield medical facility got me through my physical with no problems. The IndyCar staff helped me plan my initial testing.

But money was still the issue. So I called the Indy Lights series directly to check out prices for myself. Turns out that engine leases are $10,000. And that only gets you a used motor that cannot be raced without a $17,000 rebuild. You are not allowed to buy an engine or build your own. You must lease and rebuild through the series, which owns all 50-some-odd engines.

Tires are $2,700 per set. They’re mandated, too. And constructed from a soft compound that burns up quickly. The series also prescribed two preliminary test sessions. Track rental, tires and travel expenses racked up a $25,000 bill for testing alone.

The $50,000 budget I was given would not even pay for an engine lease and the mandatory tests.

So I did the obvious. I asked my sponsors for more money. They are fair people. They looked at the series, the exposure, attendance and the television package and their response was simple and honest – “This series doesn’t return enough value to justify more than a $50,000 investment."

At the end of the day, the market says that the Indy Lights series is not worth fifty to eighty thousand dollars per event.

You can argue till you’re blue in the face, but corporate America will not pay six hundred and twelve dollars for a Big Mac and they are walking out of the restaurant.

It’s simply not worth it.

The Indy Lights series is set to introduce a new chassis in 2015 in the hopes of getting rich European bankers and South American oil tycoons to spoil their children by writing seven-figure checks to buy their way into IndyCar.

Okay, that’s a fair plan. But how’s it working out so far? Fan Force United has cars for sale. So do Younessi Racing and Andretti Autosport. Two other cars are rusting in a Texas warehouse. Conquest’s car is ready to race but has no driver. Bryan Herta’s team told me they were already spread too thin and would rather park the car than risk losing money on engines and tires.

Is seems there are more available cars than rich kids to drive them.

Dallara told me they have stacks of spare parts in their Speedway warehouse but no one to sell them to. Genuine, cash-paying sponsors have no interest in the series. And fifteen months from today, every Lights car in existence will have the approximate value of an 8-track player.

As business plans go, this one is only slightly better than the White Star Line’s idea for a new ocean liner.

I certainly have no bitterness against the series. On the contrary, the entire IndyCar staff could not have been more helpful. They openly wanted me in the series and did everything in their power to promote my program. They are fantastic people and I support them and the series wholeheartedly.

But like it or not, one of three things is going to happen to Indy Lights:

There are no other alternatives. The writing is on the wall, and I hope someone reads it in time.