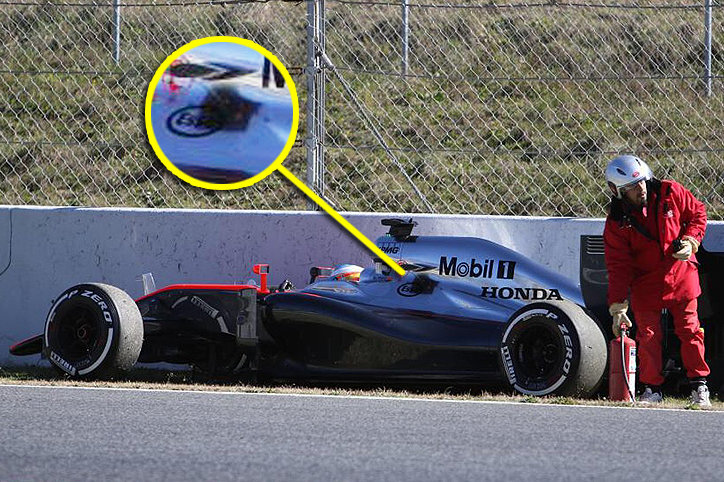 (GMM) F1 looks set to fix what one publication insists is an obvious "flaw" in the current regulations.

Article 27.2 of the rules dictates that cars must be fitted with a crash 'black box' at all times, in order to collect data "relevant to an accident or incident".

"At any time following an accident or incident competitors must make the data recorder available and accessible to the FIA," the regulations demand.

In the case of Fernando Alonso's still-mysterious testing crash in Barcelona recently, that data alone may be proving insufficient.

McLaren argues that a strong gust of wind blew the Spaniard off the track, but strong paddock rumors continue to suggest that Alonso fell unconscious before he hit the wall.

Certainly, the impact data suggests Alonso – whose helmet was reportedly not at all damaged – did not hit the wall overly hard.

The car recorded a significant 30G hit, but the accelerometer in the driver's ear showed a value about half of that.

Indeed, Sergio Perez says Alonso's crash was "not comparable" to his similarly-lateral hit in Monaco 2011, as "mine had an impact of approximately 60G".

"I wish him the best and hope he will be back soon," said the Mexican.

The lack of a widely-accepted official version of Alonso's crash means speculation continues to prosper.

Ralf Bach, a German correspondent with his own blog f1-insider.com, claims rumors of electrocution are still doing the rounds, despite McLaren's denials.

He said electrocution victims are often confused and suffer memory loss, adding that after Alonso's impact, the Spaniard thought he was still a Ferrari driver.

And Bach said that while Mercedes and Renault have five electrocution fail-safes built in for the drivers, Honda's new 'power unit' only has three.

An electric shock, he added, may also not be seen in the telemetry.

So Italy's Autosprint reports that the FIA now wants to make the use of functioning on-board cameras mandatory not only at grands prix, but also during testing.

The 2016 amendment would need to be ratified by the World Motor Sport Council.