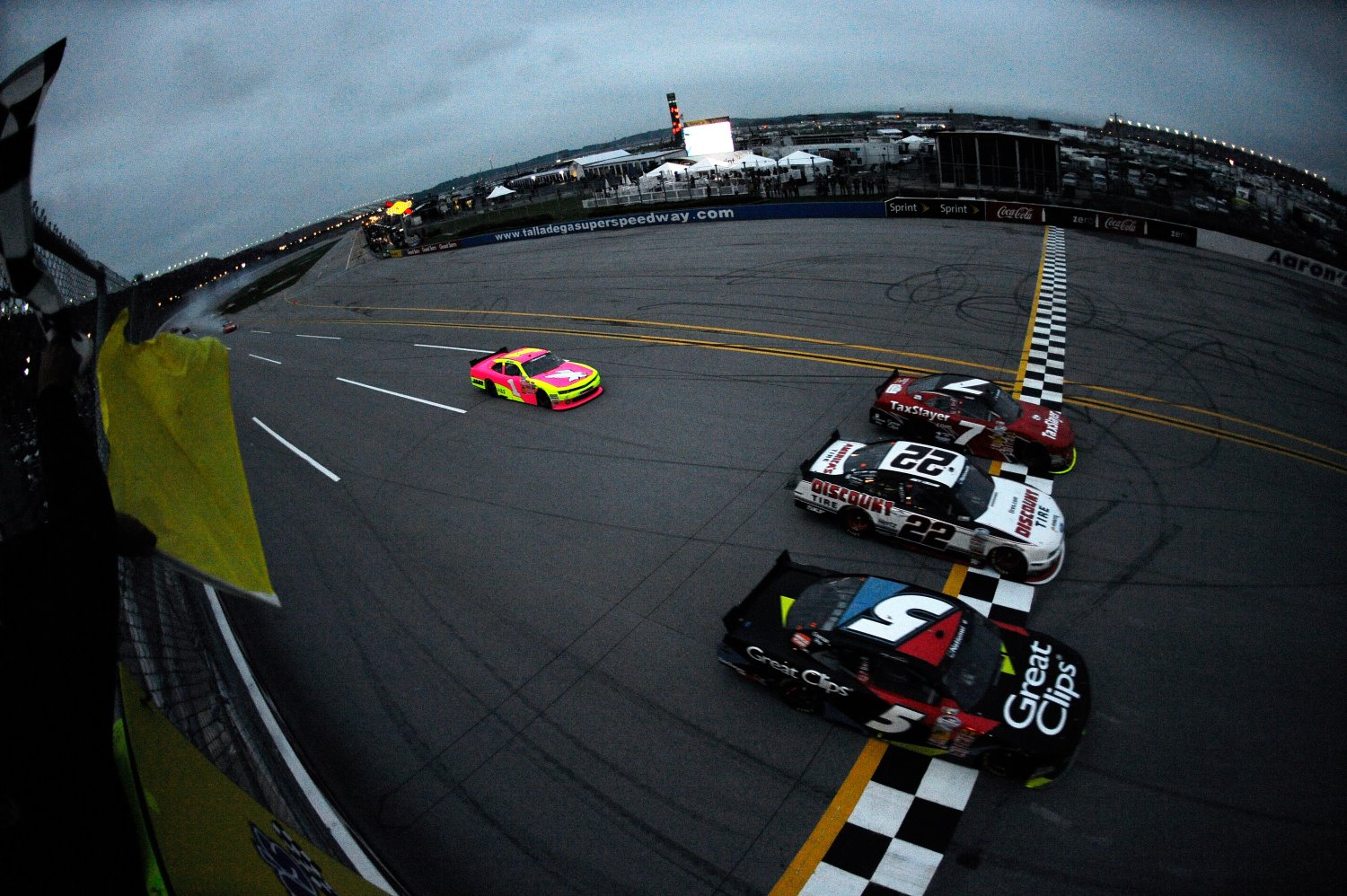 The irony of Regan Smith's victory in Saturday's Aaron's 312 NASCAR Nationwide Series race at Talladega Superspeedway wasn't lost on the driver of the No. 7 JR Motorsports Chevrolet.

With a push from teammate Kasey Kahne, Smith roared out of the pack during the final 400 yards of a green-white-checkered-flag finish and won a race decided when NASCAR called the seventh and final caution an instant before the four cars battling for the win crossed the finish line.

Smith was the leader as the field was frozen when NASCAR called the caution. Kahne was first across the stripe but was scored in third place behind Smith and Joey Logano, who were the two lead drivers when the caution lights came on.

This was the same Regan Smith who was deprived of victory in a race he thought he had won at Talladega in 2008, when NASCAR demoted him to the 18th position for passing Tony Stewart below the yellow boundary line as the cars approached the checkered flag.

"I was having flashbacks, sitting on pit road–I'm not going to lie–when they were making the decision," Smith said. "I was like ‘Man, I hope we got it–I'm pretty sure we got it when the flag came out and I saw the lights come on… They only thing I didn't know was if they took it all the way to the stripe.

"I don't know if it's vindication or not. I think I'd gotten over that and gotten past that, but I definitely wanted to win here … but you want to win every week, and it definitely helps wipe that bad memory away of sitting on pit road and finding out you're 18th instead. So, yeah, that was kind of cool."

Smith took over the series lead, by 27 points over Sam Hornish Jr. in a race whose start was delayed three hours because of rain. It's the first time JR Motorsports has led the Nationwide Series standings. It was also the first victory as a crew chief for Greg Ives.

Kahne was surprised NASCAR called the final caution instead of letting the race play out to conclusion.

"I think there's been plenty of times (when) there've been wrecks in (Turn) 4 or 3, and we've just raced to the line at the end," Kahne said. "As soon as they started wrecking, I saw the caution. I still raced to the line, and we had a good enough run to get there and be first there, but I was surprised the caution came out.

"I knew I was third when the caution came out, and I knew I was first at the line… My spotter after the race was like, 'I think we won,' but I was thinking the whole time, ‘There's no way. The caution was out.'"

Busch was leading on Lap 93 when contact between Hornish's Ford and Eric McClure's Toyota ignited a spectacular 12-car wreck that sidelined the series leader entering the race (Hornish), among others.

NASCAR then opted to shorten the race by 10 laps because of impending darkness, but four laps after a restart on Lap 101, Joey Coulter's contact with the outside wall caused the sixth caution and set up the two-lap dash to the finish.

On Lap 14, Danica Patrick spun off the bumper of series rookie Kyle Larson, her Turner Scott Motorsports teammate-for-a-day and slid though the waterlogged infield grass, damaging her No. 34 Chevrolet extensively. After losing a lap on pit road, Patrick brought the car to the garage and called it a day.

Patrick, hardly a grizzled veteran herself, attributed the wreck to Larson's inexperience with the tandem racing that characterizes the Nationwide Series at restrictor-plate tracks. Larson, who was attempting to push Patrick's car when the wreck occurred, found trouble of his own on Lap 35, when he blew a tire, spun and took Jeffrey Earnhardt's Ford with him.

The hardest hit of the race, however, came on Lap 71 when pole sitter Travis Pastrana nosed into the outside backstretch wall during a three-car incident that started when Brian Scott turned the Ford of Reed Sorenson.

Sorenson hit the outside wall and spun back across the track into Pastrana's path. Pastrana blamed himself for being in harm's way and for not reacting quickly enough when he saw Sorenson spin.

"I just get an award for being stupid," Pastrana said after leaving the infield care center. "We had the two fastest cars on the track (with Roush Fenway Racing teammate Trevor Bayne). We could have been a half-lap down just pushing each other, not worrying about anything.

"We all said we were going to sit back the whole race, and then, all of sudden, we're up there racing just like a bunch of fools up front… Everything kind of happened."