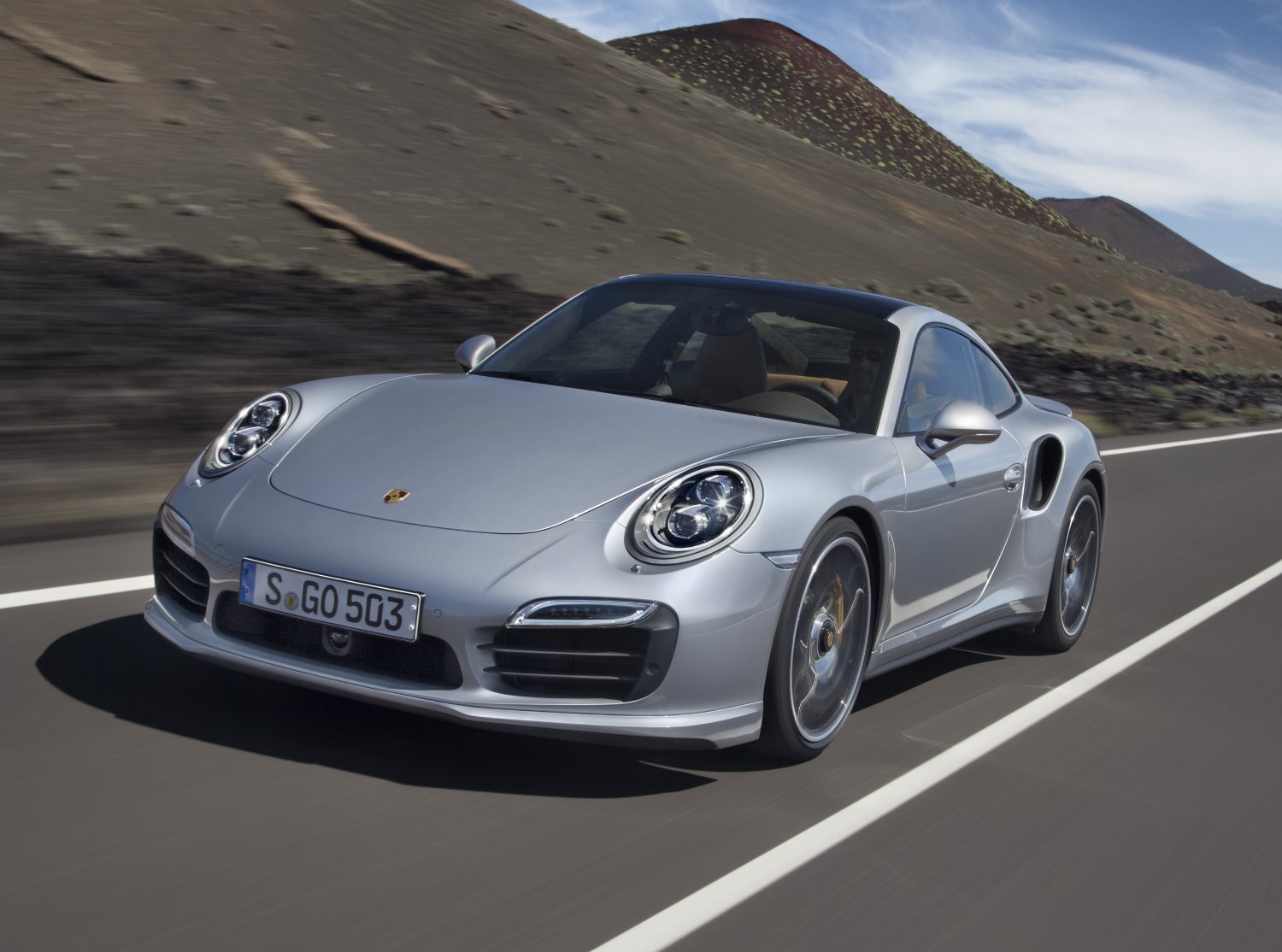 Just in time for the 911 Turbo’s 40th anniversary, Porsche has decided to give its loyal customers and fans a special present for this important milestone by unveiling the 2014 Porsche 911 Turbo and Turbo S models which will both serve as the range-topping performance models in the 911 model family.

The exterior styling of the 2014 911 Turbo S shares many of its lines with the standard issue 911 Carrera, but Porsche engineers have made several revisions that aid performance while also allowing the Turbo models to stand out from their naturally aspirated siblings.

The body of the 911 Turbo is 1.1 inches wider than a Carrera 4, and features heavily-flared front and rear fenders to emphasize the car’s performance oriented character. In addition to its wider and lower body, the Turbo line will also feature a new Active Aero system which is the first time this technology has been used on the Turbo and Turbo S models. A three-stage stage front spoiler keeps the front of the car planted and features segments that can be pneumatically adjusted while a big rear spoiler further aids the car’s aerodynamics and boasts three different positions. Porsche claims that both pieces allow drivers to tailor the car to a wide range of driving situations, while improving fuel economy and high speed stability.

Performance for the 2014 Turbo and Turbo S come from a pair of 3.8 liter twin turbocharged flat six engines with the Turbo achieving a 3.2 second time to 60 mph, while the Turbo S model achieves the same feat in a mind-blowing 2.8 seconds before achieving a final top speed of 198 MPH.

All of this power is routed to all four wheels through a seven speed dual clutch (PDK) automatic transmission which is the sole transmission choice available, and will also mark the first time that the Turbo versions will not offer a manual transmission. That may disappoint purists looking for a more involved driving experience. Porsche claims that the transmission makes up for this deficit by improving the Turbo’s fuel economy and offering quicker shifts.

In addition to its new-found muscle, the Turbo line also boasts several new pieces of handling technology which sharpen its handling and ride characteristics. A new all wheel drive system distributes power evenly to all four wheels while a new rear steering system improves low speed maneuverability and enhances stability when the car is pushed to higher speeds. The system utilizes two electro-mechanical actuators which replace the control links on the rear axles. These two components allow for 2.8 degrees of rear wheel steer which translates into increased handling capability. As a neat bonus, the rear wheels turn in parallel with the front wheels which “stretches" the overall wheelbase by a staggering 20 inches which further aids handling.

The interior of the 911 Turbo retains many of the features and basic design that first made their appearance in the standard 911, but Porsche engineers have given Turbo models several new features to better suit its performance-oriented theme with features such as speed limit recognition software, a camera based road sign recognition system, radar based cruise control, and other goodies while S models receive a model exclusive black and red color scheme for the cabin.

Pricing for the Turbo models have increased just as much as their performance numbers with base pricing starting at a hefty $149,250 for base Turbo models while range topping Turbo S variants will begin at a wallet busting $182,050 with sales beginning in Germany sometime in September, while U.S. customers will have to wait until the end of the year to pick up their purchases. In the meantime, Porsche has released several images as well as a brief video of the Turbo models in action which can both be seen below.