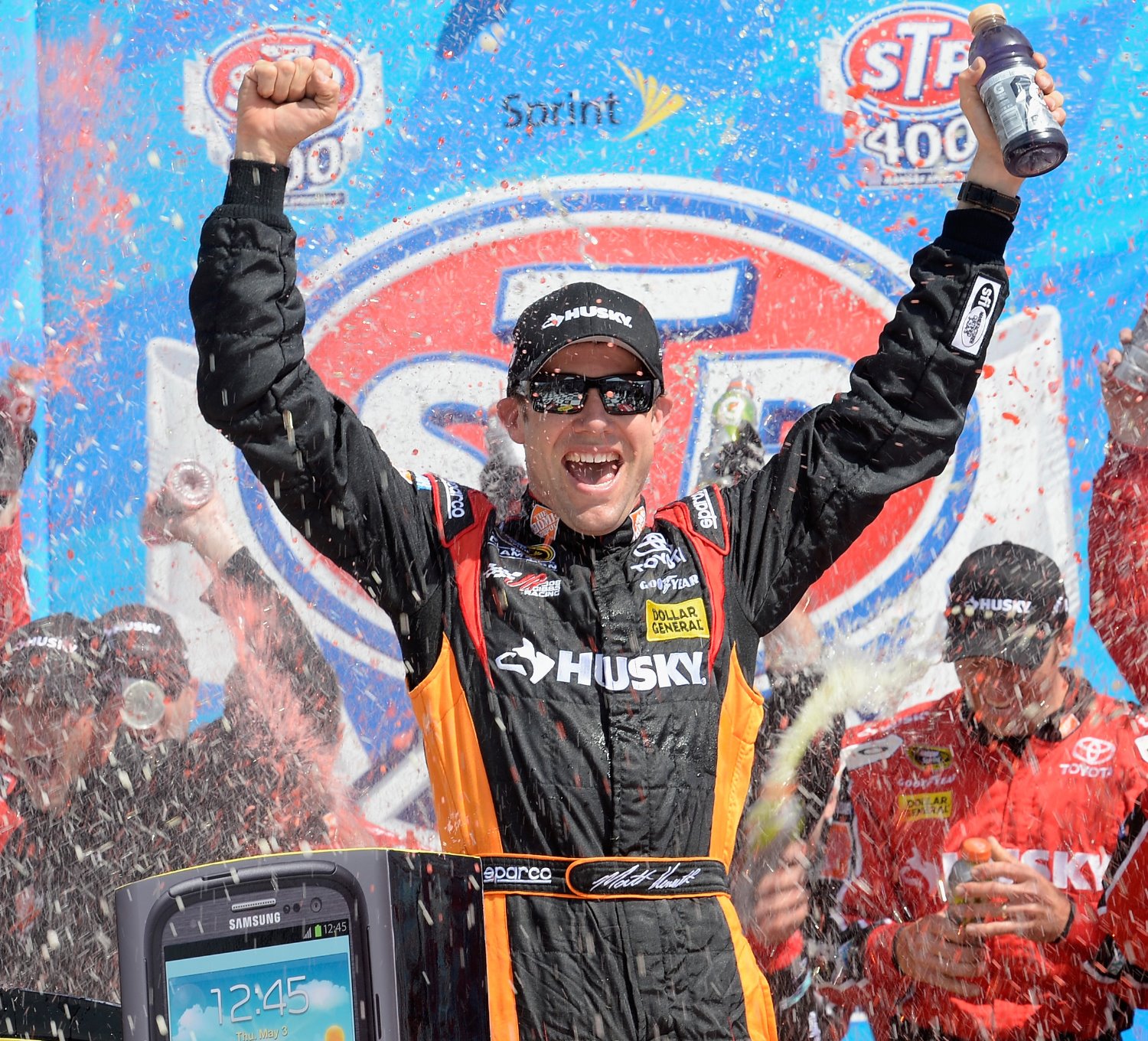 Matt Kenseth likened his victory in the STP 400 to a game of musical chairs — you had to be leading when the music stopped.

If you looked at statistics alone, you'd say that Kenseth dominated Sunday at Kansas Speedway in the eighth NASCAR Sprint Cup Series race of the season. After all, Kenseth won the event from the pole and led 163 of the 267 laps.

In reality, Kenseth prevailed in a race of extraordinary strategic complexity, with divergent approaches shuffling and reshuffling the running order until an opportune caution on Lap 218 put Kenseth back in the lead at just the right time.

Nonetheless, it took all of Kenseth's consummate skill to hold off fast-closing Kasey Kahne, who narrowed what had been a lead of more than one second to .151 seconds at the finish. Jimmie Johnson ran third, followed by Martin Truex Jr. and Clint Bowyer. The victory was Kenseth's second at Kansas, his second of the season and the 26th of his career. The driver of the No. 20 Toyota has won both races at Kansas since the track was repaved last year.

"It was kind of like musical chairs," Kenseth said. "You had to be out front when the music stopped. Our car was very fast in clean air. It was reasonable in dirty air, but it wasn't quite good enough to catch all them guys and pass 'em (in traffic).

"Thankfully, I had a couple of really crazy-good restarts for some reason and made up some ground and got us back in position."

Kahne started 27th, but the speed in his No. 5 Chevrolet SS belied the qualifying effort. Kahne's crew tightened up the handling of his car for the final run, but not quite enough. There was a sense of déjÃ  vu for Kahne, who chased Kenseth to the finish line March 10 at Las Vegas.

"We were very close at the end, battling with Matt," Kahne said. "Felt like Vegas all over again, just kind of felt like really similar to that in how I could catch him but couldn't really do anything once I got close. It made my car a little bit looser. So I tried a few things there, and he kind of blocked those spots and went those directions and gained the speed that I (had), and then we were even again.

"It was tough, but we still had a great race."

Defending Cup champion Brad Keselowski came home sixth, despite sustaining heavy damage to his rear bumper when the field checked up on the first lap.

That damage had far-reaching effects — so much so that it changed the complexion of the race on Lap 218. The rear bumper cover from Keselowski's No. 2 Ford dislodged, causing the eighth caution — right after Ricky Stenhouse Jr., Dale Earnhardt Jr., Carl Edwards and Greg Biffle had made green-flag pit stops.

But since all lead-lap cars came to pit road under the yellow, those four drivers were able to regain the lead lap through wave-arounds. Kenseth led the field to the restart on Lap 225, with Truex beside him and Hendrick teammates Johnson and Kahne on the second row.

Kenseth pulled away after the restart, and Kahne charged into the second spot. On Lap 236, Johnson passed Truex for the third position. That's the order in which they ran to the finish.

With his third-place finish, Johnson opened a 37-point lead in the Cup standings over second-place Kahne, who gained five spots. Johnson is 38 points ahead of Keselowski in third.

Keselowski position in the standings reflects a 25-point penalty levied after the Apr. 13 race at Texas, where NASCAR confiscated the rear axle housings of both Penske Racing cars and subsequently levied penalties on the organization. Penske has appealed, but Keselowski won't regain the 25 points unless the appeal is upheld.

Note: For the third straight race, a driver won from the pole. The last time that happened was 1985 (Bill Elliott at Michigan, Dale Earnhardt at Bristol and Elliott at Darlington).