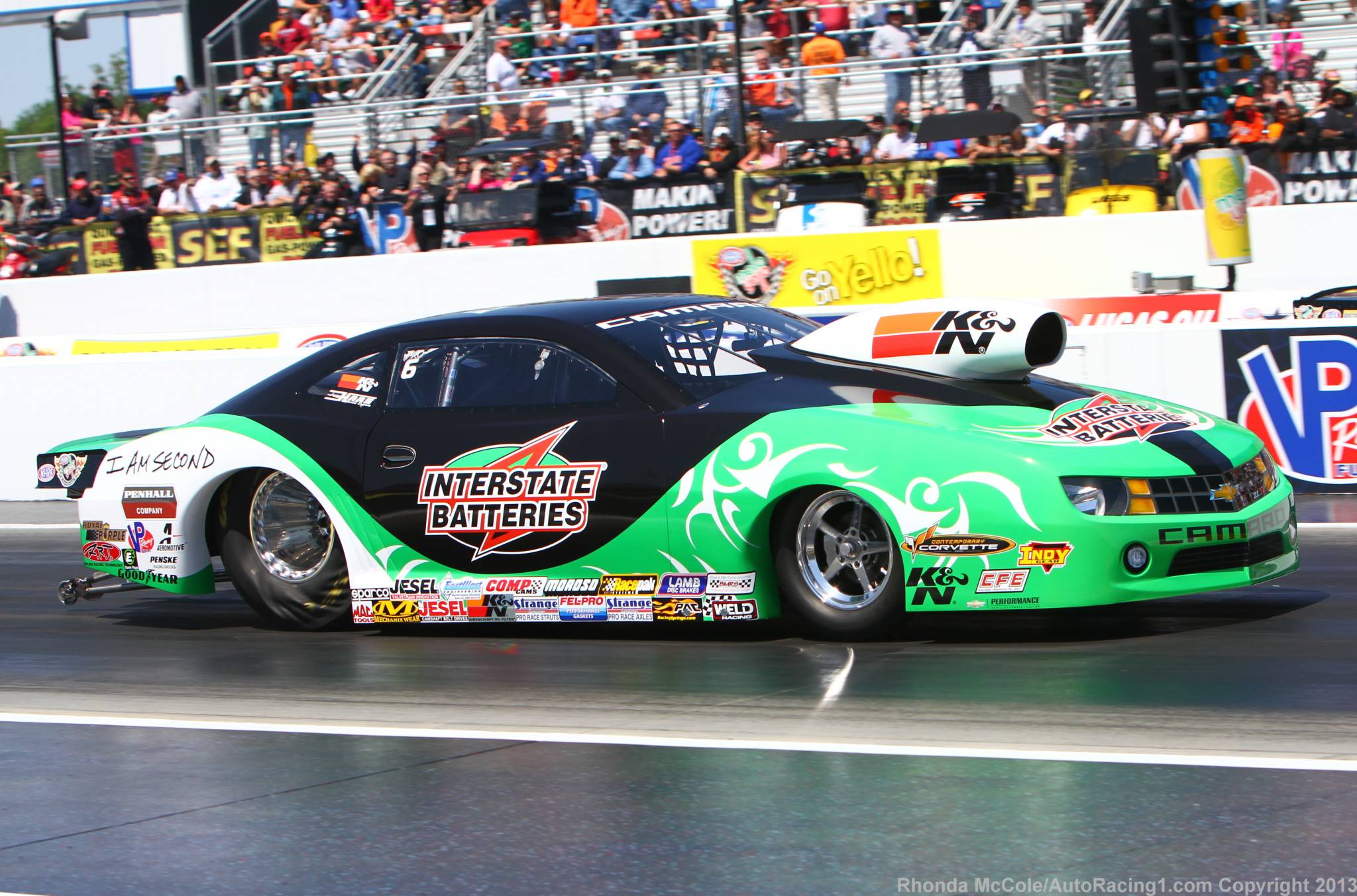 Chad Head picked up his first career no. 1 qualifier to lead the Funny Car division, while Shawn Landon (Top Fuel) and Hector Arana, Jr. (Pro Stock Motorcycle) both notched their first top qualifiers of the season.

Following Friday’s rain-out, qualifying got underway Saturday afternoon under crystal-clear skies at the NHRA’s only four-lane dragstrip, where the pro classes qualified using all four lanes.

A cold front that passed through the area Saturday brought out the rain but also brought with it unseasonably cool temperatures, resulting in cooler track conditions and lots of grip.

Edwards posted the quickest Pro Stock run in NHRA history in Saturday’s opening round of qualifying with a pass of 6.471 seconds at 213.64 mph, then backed it up with a second-round effort of 6.490 to set the new National Record, eclipsing his own previous mark of 6.473 set just a month ago at Gainesville.

Edwards extended his top qualifier streak to five races, but has yet to record a victory so far this season.

“Today was an awesome day. That was an outstanding run," said Edwards. “We made some changes in the offseason, the engine program has done a tremendous job working in some areas we felt we could improve, and it’s actually helped us on the race track, and we’ve been really happy with the new Camaro and the support from Chevy.

“It’s been an amazing start, hopefully we can keep it going."

If no one posts a quicker time during Sunday’s eliminations, Edwards will pick up 20 bonus points for his record-breaking run, but track conditions expected for Sunday means the record could still be up for grabs.

“That record is not safe by no means," said Edwards. “Tomorrow they’re calling for maybe the same temperatures or even a degree cooler, so yeah – I think tomorrow somebody could go even faster. Hopefully it’s us."

Running in just his third event of the season, Head posted a low ET of 4.014 at 315.19 mph in the opening session that held up through the afternoon to earn him the pole.

Head, driving a car owned by his father and longtime Funny Car driver Jim Head, resigned as Director of Competition for Al-Anabi Racing in the offseason to take over his father’s ride, with his father staying on as crew chief.

So far this season, Head had recorded a DNQ at Gainesville and a first-round exit at Las Vegas before his pole-winning run at zMax, a turnaround he credited solely to his father and his crew.

“I expected success with my father being the crew chief," said Head. “He’s very talented, he does a great job. That just shows you what good job he’s doing, because I’ve got a long way to go. I’m just hanging on. It’s just lucky that the car went straight, because it’s got nothing to do with me and my ability. It’s the way those guys set the car up, it’s 100% on those guys because, there’s no way in 25 runs (this season) that I have the ability to go 4.01, it just shows you how good that team is."

Robert Hight claimed the bump spot after a scary incident in the second round that saw the body of his Ford Mustang fly off and land in a spectator area, with two fans suffering minor injuries.

In Top Fuel, Shawn Langdon rallied from third in the opening session to rocket to the top spot with a run of 3.751 seconds at 327.90 mph, knocking Spencer Massey from the top spot.

The pole-winning effort was the first for Langdon this season and seventh of his career.

“The first run we made, we felt like we left a little bit on the table," said Langdon. “We shot a (spark) plug out right around half track, we felt pretty confident that going up there for second round that if the track was holding up pretty good we could shoot for the no.1 position.

“We felt we hit it pretty good on that first run with that .79, we really felt that if we hadn’t shot the plug out we could have run a .77, so we felt pretty confident going into that second run. If we could lay down a picture-perfect run that we really felt could get around a .77; I think we exceeded our expectations with a .75, which is definitely a big confidence booster going into tomorrow."

Sidnei Frigo – who scored a Top Alcohol win here in 2011 – took the bump spot and will face Langdon in the opening round of eliminations on Sunday. Non-qualifiers were Pat Dakin, Chris Karamesines, Clay Millican and Terry McMillen.

Defending champion Eddie Krawiec barely held onto the bump spot to face Arana, Jr. in Round 1.