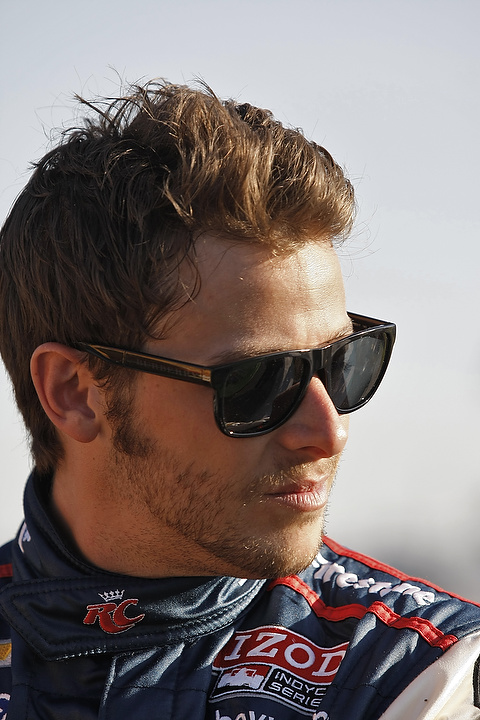 Maybe, the problem isn’t them, but us.

Who is the “them," I speak of, you may ask? Second and third generation racing drivers; currently men such as Marco Andretti, Graham Rahal, and Dale Earnhardt, Jr.

See, with such individuals we seem to be constantly waiting for them to "break out." We forecast when they are finally going to justify their supreme genetic composition, and “live up" to the family name. If said break out doesn’t occur, we willing label them "underachievers," or suggest they are products of nepotism. And understandably, we’re not inclined to sympathize with those we believe to be products of privilege and nepotism.

However, as we will see such drivers fail to garner our praise, even when they do succeed. Yes, although born into Racing Royalty, these men can’t win! If they fail, and our definition of failure is drastically different with regards to them, they are viewed as privileged underachievers, who impugn their family name. If they succeed, well, then that’s what was supposed to happen, because they are children of material privilege and blessed with racing proficient bloodlines.

In short, we judge the offspring of racing greats by a standard I find difficult to accurately describe. However, the standard is rarely performance-based, and rarely a comparison to contemporaries. Rather, we seemingly project some arbitrary criteria relative to the racing proficient bloodlines we believe drivers with renowned surnames like Andretti, Rahal, and Earnhardt should achieve. And in projecting what we believe they should be, we fail miserably to see them for what they actually are.

While I can give numerous examples, let’s begin with last weekend’s IndyCar opener at St. Petersburg. Last week on ESPN 1070 in Indianapolis, longtime IndyCar journalist Robin Miller noted that Marco Andretti, finally drove "like an Andretti," in finishing third. To be fair, Miller intended the comment as a compliment, and I am not criticizing him. Rather, I am using his quote to illustrate a larger issue: Marco Andretti is judged not relative to his peers, nor the merits of his own performance.

For example, you don't hear Marco's heady, mature drive to third referred to as "Serviaesque." Rather, Andretti is judged overwhelmingly relative to the accomplishments of his father Michael (3rd on the all-time IndyCar wins list) and grandfather Mario (2nd).

Now, some would point out that comparing Marco to this famous father and grandfather simply comes with the territory. Certainly, Marco has benefited from their accomplishments, which have made the Andretti name synonymous with racing excellence. And clearly, as of yet, Marco has not matched those standards.

What you never hear is Marco compared to a more relevant contemporary. For example, the aforementioned Oriol Servia is a fine, professional racer, with a career that has statistical parallels that of Marco Andretti (contrary to prevailing wisdom, I would actually argue Marco is better). However, Servia is never referred to as an underachiever. Servia is never presumed to unfairly have a ride. Rather, we think of the likable Spaniard as a “grinder," and a “true professional." Marco is never described in such terms.

Now, I am not saying the description of Servia is inaccurate. Further, I realize Marco’s public persona plays a part in this. Marco can be a somewhat aloof, uncomfortable public figure, similar to his father Michael Andretti, conveniently the son of a racing legend, also. Neither Marco nor Michael have ever displayed the public polish of family patriarch Mario.

However, maybe this is because Michael and Marco know the public is often difficult on the children of Racing Royalty. Take the example of 1996 Formula One World Champion Damon Hill, son of two-time World Champion and 1966 Indianapolis 500 winner Graham Hill.

Damon, of course, emerged as the number one driver at Williams after the death of Ayrton Senna in 1994. The younger Hill very quietly put together an impressive F1 career, scoring 22 victories in 122 starts. For some perspective, Hill won more races than Jochen Rindt, John Surtees, Keke Rosberg, and Dan Gurney combined. Further, while Damon's 17% win rate, does not match all-time greats such as Alain Prost, Michael Schumacher, Sebastian Vettel, Senna or Jackie Stewart, it does outclass other world champions such as Emerson Fittipaldi, Nigel Mansell, Nelson Piquet, and Graham Hill.

Yes, Damon won at a clip surpassing his famous father, who scored eight fewer wins, yet contested 57 more Grand Prixs. Nevertheless, debonair, cosmopolitan, mustachioed Graham Hill, remains the more revered. Charming, good-looking, humorous and fiercely determined behind the wheel are adjectives often uttered of the elder Hill. Surely, the fact Graham was one of the more high-profile figures to compete during racing's Golden Age in the 1960s, adds to his legend.

Still, Damon was enormously successful, yet remains lost amongst the greats of his era. Whether it is lacking Graham’s charisma and bravado, or because greatness was simply expected as the son of a legend, the younger Hill is largely, overlooked. People view his 1996 championship as something that would have been more befitting of his predecessor Senna. Others point out that Schumacher’s Ferrari wasn’t up to snuff that season, and that Hill had the benefit of an Adrian Newey designed Williams.

Now, I would offer that such thinking conveniently disregards the fact drivers are often credited with developing the car. Likewise, I would ask whether Damon should have gone to a lesser team to prove his adequacy?

Still, personal skepticism aside, the point remains: for whatever reason Damon Hill, a second-generation driver, who from a statistical standpoint, surpassed his legendary father, is largely overlooked. Why that is, I suppose can be debated. However, maybe the fact greatness was simply expected from the son of a racing legend, prevents us from judging Hill’s career on its own merits.

Junior makes for something of a complicated study, occupying a unique position in NASCAR, as the immensely popular son of his deceased father. The younger Earnhardt regularly wins popular driver awards for his "regular guy," everyone wants to have a beer with persona. Junior Nation is large and vocal to the point you can audibly hear them cheer on television when Dale, Jr., takes the lead of a NASCAR event.

Of course, such adoration contrasts greatly with Junior's critics. They insist the younger Earnhardt is an over-rated product of nauseating hype, trading on his father's name, and the adoration of the mindless, unwashed masses. Further, such critics also point out Earnhardt has been with the best team in the sport for the past five seasons, and won two races.

Oddly, both positions regarding the younger Earnhardt, greatly fail to understand Dale, Jr., the driver.

See, as a driver Junior is neither worthy of our idolatry, nor is he the wanker some suggest. Simply put, Earnhardt is a good, solid, professional driver, just not a great one. In fact, I'll give you a contemporary Earnhardt compares with favorably: his teammate Kasey Kahne.

Without going into immense detail, the narrative on the racing prowess of Kahne is far different from that of Earnhardt, Jr. To many, Kahne is a supreme talent, who has finally earned an opportunity with a top team. However, if you remove the influence of prevailing wisdom, and simply look at the data, Earnhardt, Jr., and Kahne are actually quite similar.

Yet, Earnhardt will always struggle to gain appreciation for his on-track prowess. Critics will simply say, “he needs to win," which conveniently ignores the key fact, he already has.

Now, it should be said Junior is not the driver Senior was, but again, the same can be said for all but a few drivers in NASCAR history. However, that does not mean he is the wanker some suggest. No, Junior is a good driver, just like Kasey Kahne is a good driver.

Moving ahead, to another modern second-generation driver, let us briefly take a look at Rahal.

I've long argued that Rahal is an incredibly difficult case study, because of the age at which he entered the sport, and the fact he has changed teams so often throughout his young career. I outlined this in greater detail in a December article on AR1. http://www.autoracing1.com/article.asp?id=3902.

However, one of the narratives on Rahal is that he is one the verge of a breakout. In other words, we are expecting some sort of breakthrough, possibly because Graham is the clear number one driver on his father's team, and well, he is the son of three-time Indy car champion Bobby Rahal.

While that may be the case, as Rahal is still an incredibly young 24, such thinking may likewise cloud our evaluation.

See, as I outlined in the December article from an age standpoint, Rahal has time, plenty of it. In fact, IndyCar drivers tend to peak in their early-mid 30s, thus from the perspective of age, Rahal could still yet be a number of years away from his prime.

The evidence working against Rahal emerging as a championship contender, however, is also strong. While Rahal is young in terms of age, he is actually quite advanced in terms of career starts. Rahal, who has started 92 career races, has one career win. Now, only one driver in IndyCar history has scored more than ten career victories, when achieving win number two after his 100th start (Johnny Rutherford).

Yes, history tells us that your performance through 100 starts is an excellent benchmark projecting career output (Rutherford and a few others like Tony Kanaan aside). And from that perspective, history tells us Rahal needs to start winning soon if he is ever to become an all-time great.

Of course, we don’t always apply such reason. Because Rahal is the son of an IndyCar legend, we expect greatness. And if greatness isn’t produced, inevitably declare failure.

Contrarily, a cold look at the evidence so far, would indicate young Rahal is a good driver, capable of scoring a strong result on his day, and the occasional win. However, there is likewise evidence suggesting that may be all.

In conclusion, it may on the surface seem preposterous to take up the cause of those born into Racing Royalty. After all, such men as Hill, Rahal, Andretti, and Earnhardt, Jr., were afforded opportunities in climbing the ladder unavailable to most.

However, a closer look reveals that once at the top-level, such men struggle to gain our appreciation, even as we saw with Hill, who was enormously successful. Part of it could be that greatness is simply expected. Still, it seems our ridiculous standards cloud our thinking enormously.

However, we will likely persist with our antiquated paradigms, and wait for men like Andretti, Rahal, and to a lesser extent Earnhardt to start winning. All the while, we’ll fail to realize that in projecting said breakthrough, we are effectively assuring it will never happen.