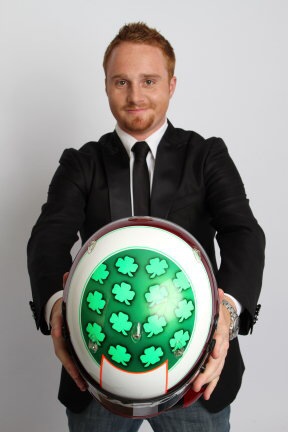 Rumor has it that Ryan Phinny, 25, an American driver out of Los Angeles who ran five Indy Lights races this past season, three with Bryan Herta Autosport before switching to Belardi Auto Racing for the Sonoma doubleheader season finale, may be close to landing a fulltime IndyCar ride for 2015.

He has backing from Casamigos, an American tequila company who has three partners, George Clooney, Rande Gerber and Mike Meldman and we have updated our 2015 IndyCar Silly Season page accordingly.

Phinny's racing resume is impressive and includes an extremely successful national level karting career that all started when he began racing at the age of eight. Ryan has a great deal of open-wheel experience coming in Formula BMW and Star Mazda, and he also ran a single Indy Lights race in 2011 at the Grand Prix of Long Beach. In 2008 and 2009, he competed in the Rolex Sports Car Series and American Le Mans Series.

Phinny is excited and energized to represent and promote the cast of supporters that will see their logos adorn his car. Casamigos, which stands for 'House of Friends', was launched in 2012 by George Clooney, Rande Gerber, and Mike Meldman. Additional associate sponsors include 'The Thermal Club / Private Pavement' – a private motorsports facility in California, DripDrop – elite hydration science, Jason of Beverly Hills – a trendsetting designer of diamond pieces, and the Discovery Land Company. Ryan will be taking a break from all of his current film industry endeavors until the end of the racing season in order to give full focus to this program to ensure that he enjoys successful return to open-wheel racing.

"I really want to thank Mike Meldman, George Clooney, and Rande Gerber for bringing me into the 'House of Friends' and giving me the opportunity to represent the Casamigos Tequila brand," Phinny continued. "I've always wanted to merge the Hollywood aspect of my life with racing, it's really a great fit. I'd also like to thank former Indy 500 champion Danny Sullivan for all the support and advice he has given me throughout my career thus far."

In a related report Phinny told NBC MotorSportsTalk. "Tequila is a Mexican product but Casamigos is an American company; it's a very pro-American business. So we sat down and it was, 'This is what I can offer you,' and we worked at it.

"I was basically broke for three years. But we made meetings at retail accounts. I worked hand-in-hand with distributors to make sure they had a great program. When you can do that for a company, i.e. a liquor company, and you can get in a big chain (California Pizza Kitchen in Casamigos' instance) this helps a company get jump-started. It helps instill their confidence in me.

"The way people used to go about it was the sticker-slapping way of putting stickers on the car. But I had to go back and see this is what they need, what benefits them, and I had to get them what they wanted."

Phinny got reacclimated and by Sonoma, he was quickly on pace with new teammate Gabby Chaves at Belardi – Chaves, of course, went on to win this year's Indy Lights championship. And Casamigos liked what they saw both in the driver and the series, as a new sponsor.

"I think right now, we both see there's more potential in IndyCar now than in F1 or Europe," Phinny explained. "They see a sport that's ramping up. It fits their profile, which is an ultra premium beverage, and a sport that is a high-end lifestyle. I see a lot of potential in it."

This then leads to the next part… an available team. NBC Sports says Phinny has said he has been in talks with Chevrolet teams, and by process of elimination that rules out Penske and Ganassi, but leaves open CFH and KVSH Racing.

CFH is out though, for two reasons. One, the team's only open seat is a partial season ride for road and street courses with Ed Carpenter driving the ovals. And two, tequila and vodka generally don't mix well.
"
That wasn't so much an issue for Casamigos, because it's vodka and tequila – two entirely different types," Phinny said. "It's just confusing for (CFH) to have both. Fuzzy's is a great partner for them, and they're committed to the season."

KVSH has its second seat available. A third car there also could be possible; the team has operated three full-time cars before (2010-2012).

Phinny is optimistic he'll be testing by mid-January at Sebring and potentially New Orleans. If he does, that will be his first day in the latest Dallara DW12 chassis.

Like other drivers, Phinny's biggest stumbling block throughout his career has been a steady, consistent full-time program, which is why he is seeking and pushing for this so hard right now.
"
My issue in Lights seemed to be the inconsistencies of the program itself," he said. "In sports cars when I had a consistent program and good testing, we were at the front of the pack.

"I've grown up with most guys that would be rookies. It's been a while since (Alexander) Rossi and I raced. But people’s styles don't change. It could be a great year."