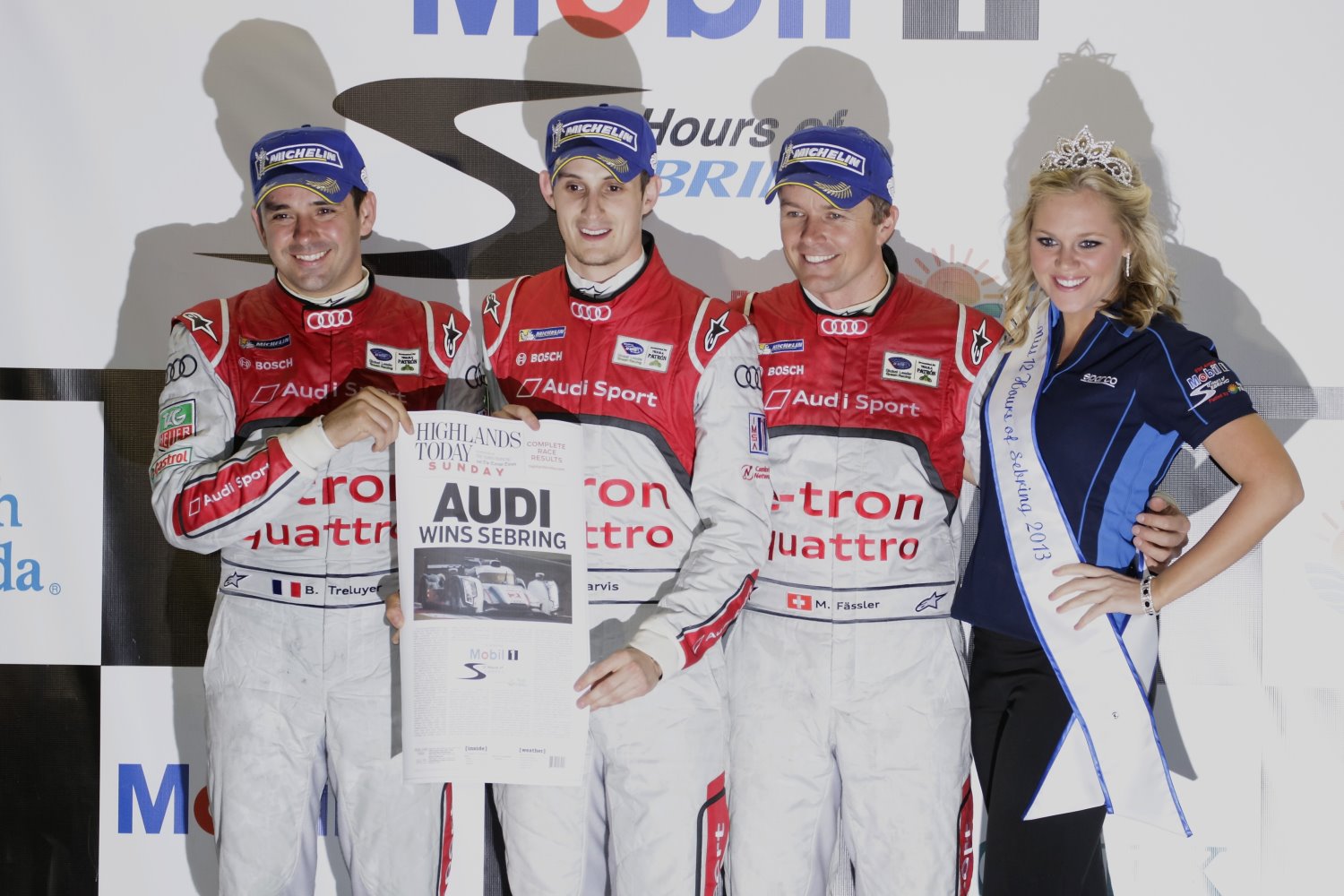 In the thrilling duel between the team’s two cars the current Le Mans winners and World Endurance Champions Marcel Fassler (CH) and BenoÃ®t Treluyer (F) plus Sebring newcomer Oliver Jarvis (GB) prevailed by a narrow margin. All three celebrated their first Sebring triumph. For Jarvis, after the GT success with the Audi R8 GRAND-AM at the Daytona 24 Hours, this marked the second victory at a classic U.S. endurance race.

Audi Sport extended its remarkable run at Sebring International Raceway on Saturday. Marcel Fassler, Benoit Treluyer and Oliver Jarvis won the 61st Mobil 1 Twelve Hours of Sebring Fueled by Fresh from Florida in their No. 1 Audi R18 e-tron quattro – the first hybrid car to win at Sebring and in the American Le Mans Series presented by Tequila PatrÂ¢n.

“For sure at the end with the traffic it was really hard to see in the mirror," said Treluyer, who has won the 24 Hours of Le Mans the last two seasons with Fassler and Andre Lotterer. “I just had to keep the gap. Tom was doing good on the out laps and could warm the tires better than me. But after that I could go quicker than he and I could bring it home."

The two Audis shared the lead 21 times among themselves. All three drivers won at Sebring and in the ALMS for the first time. The victory marked Audi’s 11th in America’s oldest sports car race since 2000. Jarvis is 2-for-2 to start the season, having won the GT class of the Rolex 24 At Daytona in an Audi R8.

“To win Daytona was unexpected and to come here and win again was even more incredible," Jarvis said. “Marcel and Benoit are used to driving with Andre, and they really welcomed me in to this car. The guys on the team work ever so hard – working late and up early. It was a fantastic week and fantastic couple of months. To be asked to drive here was a privilege and then to win with these guys… Wow. It is amazing."

Tommy Milner passed Matteo Malucelli for the GT lead and eventual class win as Corvette Racing won at Sebring for the first time since 2009. Milner, who drove the No. 4 Corvette C6 ZR1 with Oliver Gavin and Richard Westbrook, overtook Malucelli – who went off twice in the span of a lap – in Risi Competizione’s Ferrari F458 Italia with 13 minutes left.

“I'm a bit at a loss for words," said Milner, the defending ALMS GT champion with Gavin. “We obviously are off to a great start. We had two unbelievable stops toward the end, and that gave me the adrenaline to keep pushing. I knew I needed to do my part. It was just an unbelievable finish."

It was a roller-coaster day for the No. 4 car. It lost two laps with electrical problems early and received a one-minute penalty for avoidable contact.

“Certainly it seemed like we were making it harder than we wanted to," Gavin said. “We got about a lap and a bit down. The crew was fantastic today, but Tommy and Richard drove great. Tommy at the end drove ridiculously well. Then the Ferrari made a mistake at the end and he was in a spot to take the lead. This is just fantastic."

“This is an incredible experience," Tucker said. “Today, and over the past four years, make you realize that (Sebring) is just a special place and I think everyone likes coming here. You kind of make your own luck, and we got lucky in a lot of spots. Things went to plan."

Franchitti crossed the line just seconds ahead of Ryan Hunter-Reay in the No 552 Level 5 entry. Hunter-Reay drove with Tucker and Simon Pagenaud. The Greaves Motorsport trio of Tom-Kimber Smith, Christian Zugel and Eric Lux placed third.

Level 5 and Greaves swapped the class lead with Extreme Speed Motorsports’ No. 01 HPD in the race’s opening half. Familiarity with the HPD prototype and experience at Sebring – plus a clean race – eventually won out for Level 5.

“We've gone through some challenges but every one has worked so hard," Briscoe said. “They were up ‘til 3 (Saturday morning) working on the cars, and then they ran flawlessly. The pit stops were absolutely perfect. We didn't put a wheel off all day. We didn't want to have an exciting race; we knew we just had to have a good day."

PC
David Ostella made a winning pass of his own to give PR1/Mathiasen Motorsports its first Sebring victory in Prototype Challenge presented by Continental Tire. Driving the No. 52 ORECA FLM09, he passed BAR1 Motorsports’ Kyle Marcelli with 28 minutes left.

“I've never done anything like this before – P1 cars flying around and you going by GT cars," Ostella said. “Then battling for first with Kyle Marcelli… we got by him and I put my head down with some perfect laps. The PR1 team gave me a perfect car for the weekend."

The car dropped to the rear of the field after an early-race off and contact with a P1 car in the race’s seventh hour. It was an example of how wild the PC race was – there were 27 lead changes in the class.

“We had lots of little troubles, but the team always gave us something to crawl back with into the lead," Cheng said. “We figured out the Continental Tires and knew would come down to the last 15 minutes. David on the last stint executed perfectly."

GTC
Alex Job Racing won for the second straight year in GT Challenge. The No. 22 Porsche 911 GT3 Cup of Jeroen Bleekemolen, Cooper MacNeil and Dion von Moltke won after dominating the race early, then taking the lead late from the No. 66 TRG Porsche when it pitted for a splash of fuel and brake adjustment.

Alex Job Racing won last year’s ALMS GTC championship, and MacNeil took the drivers championship. The class race had the most lead changes of any Saturday with 31. The top six GTC cars were on the lead lap as late as the final hour.

“The competition was amazing. We all have the same car, same tire," Bleekemolen said. “All the teams are so close. The Alex Job team did such a good job all week. We rolled off the car off the trailer and we were P1 right off the bat."

Von Moltke won at Sebring for the second straight year and added to his GT victory in the Rolex 24 – he drove the winning Audi with Jarvis – while MacNeil and Bleekemolen won the 12 Hours for the first time.

“I can't put it into words," von Moltke said. “I'm so lucky to be part of an amazing team with AJR and a company like WeatherTech. They bring excellence to the culture of the race team. All of the crew guys and the engineers all have one goal – to win. That puts an energy in to the team."

Spencer Pumpelly, Brian Wong and Nelson Canache placed second for Flying Lizard Motorsports in the No. 45 Porsche. Sean Edwards, Henrique Cisneros and Marco Seefried were third for NGT Motorsport in the No. 30 Porsche.

Quotes after the race

Dr. Wolfgang Ullrich (Head of Audi Motorsport): “That was a perfect finale! I’m very happy about this one-two victory in a race in which both of our cars battled against each other all the way to the finish and delivered a fantastic show to the many fans. The entire squad worked hard, so winning after a long twelve hours is the sweetest reward. After victories with TFSI and TDI technology, Audi on clinching the win today with a hybrid car has continued the success story at this race."

Ralf Juttner (Technical Director Audi Sport Team Joest): “This is an outstanding result for what has at least provisionally been our last run here at Sebring. I’m happy about this one-two victory at which either of our two teams would have deserved first place. In the beginning, both cars were running on different strategies. At some point in time they were nearly in parallel and at the finish not even ten seconds apart. We’ve been enjoying the atmosphere here at Sebring with brilliant weather and unique fans. This victory is a nice reward for the whole squad some of whom worked through the whole night before the race and then delivered perfect pit stops for twelve hours straight."

Marcel Fassler (Audi R18 e-tron quattro #1): “Celebrating Audi’s last race here at Sebring with a victory is simply fantastic. It was an incredibly close race in which both cars would have deserved to win. In the end, we were the slightly more fortunate ones. The pole position yesterday, victory today, great team-mates – things couldn’t be any better today."

Oliver Jarvis (Audi R18 e-tron quattro #1): “What a start into the 2013 season! This isn’t a dream; it’s a lot more than that. Winning with Audi at Daytona already was an incredible experience. But now an overall victory on my first run at Sebring on top of that is more than I’d ever dared to hope for. A huge thank you to Audi and to Marcel (Fassler) and Ben (Treluyer) – they’ve been the best team-mates I could imagine."

BenoÃ®t Treluyer (Audi R18 e-tron quattro #1): “We won the last race of the LMP1 sports cars at Sebring – we’re very proud of this. I think that the fans witnessed a thrilling race in which we had to give one hundred percent to beat our sister car. For us the American dream has come true today. Thank you to Marcel (Fassler) and Oliver (Jarvis) for a great week here at Sebring. Normally, André (Lotterer) is part of our team as well – I’m sure that he’d have been on top of the podium here too."

Lucas di Grassi (Audi R18 e-tron quattro #2): “This was my first 12-hour race, my first race in the dark and my first run at Sebring – the podium position is a brilliant conclusion of the weekend. It was a very close race with a few incidents and a controversial penalty. More would have been possible for us but as far as I’m concerned the joy about the second place with Audi outweighs anything else."

Tom Kristensen (Audi R18 e-tron quattro #2): “It was a memorable, tough and fast race. We had the chance ourselves to win today – but we didn’t make it. So, ‘well done’ to the guys from the ‘sister car’ and all other winners here at Sebring. Aside from our second place I’m taking a lot of memories home with me from all the years and the fastest race lap on today’s farewell. It’s for a man who has given me the passion for motorsport."

Allan McNish (Audi R18 e-tron quattro #2): “What a fantastic race! We arrived here with Audi in order to say goodbye to our fans at Sebring with a thrilling performance – and I believe we managed to do that. It was a fierce battle from the first to the last lap. I’d like to congratulate the team of our ‘sister car.’ On a very personal note, I’m absolutely pleased with the race. Some of my stints were the best I can remember in the past few years."