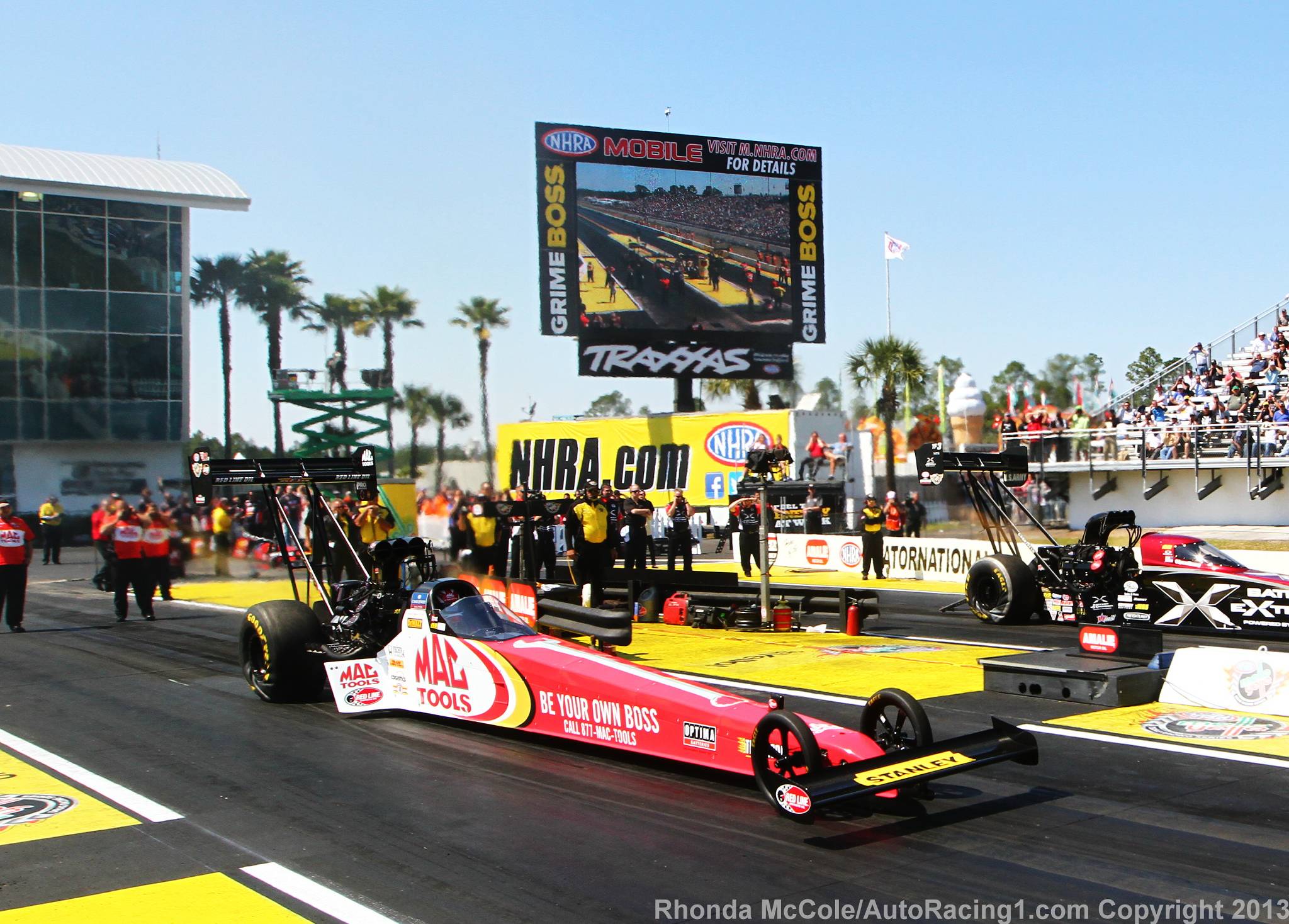 Kalitta backed up his low ET from Friday’s second round with a pass of 3.779 seconds at 326.32 mph in the final run of the session to knock off Antron Brown and re-claim the top spot for his second straight no. 1 qualifier of the season and the 33rd of his career.

“I was surprised when Antron went out there and ran that .78 because everybody was bunched closer than that," said Kalitta, who will face Leah Pruett in the opening round of Sunday’s eliminations. “Hats off to Jim (Oberhofer, crew chief) and all my guys and the decision they made at the end to get it to run like that. It was nice and straight and planted to the middle of the grove and I am really looking forward to tomorrow. Hopefully the conditions will be the same as today and we won’t have to mess with our tune-up much and put a string of runs together tomorrow."

Antron Brown, who briefly held the top spot in the final round of qualifying, held onto the second position after posting a 3.787 at 324.20 mph. Shawn Langdon was unable to improve on his time from Friday’s session and kept the third spot with a 3.802/324.59. Clay Millican (3.812/323.27) and Tony Schumacher (3.819/323.89) rounded out the top five qualifiers. Non-qualifiers included T.J. Zizzo, Terry McMillen, Ike Maier, Stig Neergaard, Tim Cullinan, Pat Dakin and “The Greek" Chris Karamesines.

In Funny Car, Cruz Pedregon took the pole position for the second straight year, sweeping all four rounds of qualifying to win his first no. 1 qualifier of the season and 51st of his career.

Pedregon’s time of 4.047 at 305.49 mph from Friday’s session proved to be unbeatable, but mechanical issues forced him to abandon his final run of the session on Saturday.

“We had some kind of mechanical problem," Pedregon said of his final-round attempt. “You just have to put it behind you. Tomorrow is another day. You just have to shake it off. We’ll put the car back where it was and just let it rip. We’re going to have to press the issue a little bit because there are a couple of cars that can run with us. That 4.04 isn’t going to buy us any round wins tomorrow. We are going to have to take it to them."

Defending Gatornationals Pro Stock champion Mike Edwards picked up his third consecutive no. 1 qualifier of the season and 44th of his career with a record-breaking time of 6.473, eclipsing the National Record ET of 6.477set by Jason Line in October of 2011. Edwards’s speed of 214.31 mph was just four-hundredths of a second short of another National Record, but was enough to best the track record of 213.57 mph set in March 2011 by Erica Enders-Stevens.

“We feel like we have a good shot at it and we’re going to do our best to pull it off tomorrow," Edwards said. “We made a really good run this morning and we were trying to run a little better in the afternoon. All of my guys have done a tremendous job and we’ve done a lot of testing. I feel like we’re going in the right direction. I can’t say how happy I am with my new Camaro, it is just phenomenal. We weren’t consistent last year at all. This year we are making better decisions and making better runs. Confidence goes a long way in this class because it is so competitive. All things being equal, I feel really good about our chances."

Should no one else beat his low ET this weekend, Edwards will collect 20 bonus points for his efforts. He will face Warren Johnson in Sunday’s opening round.