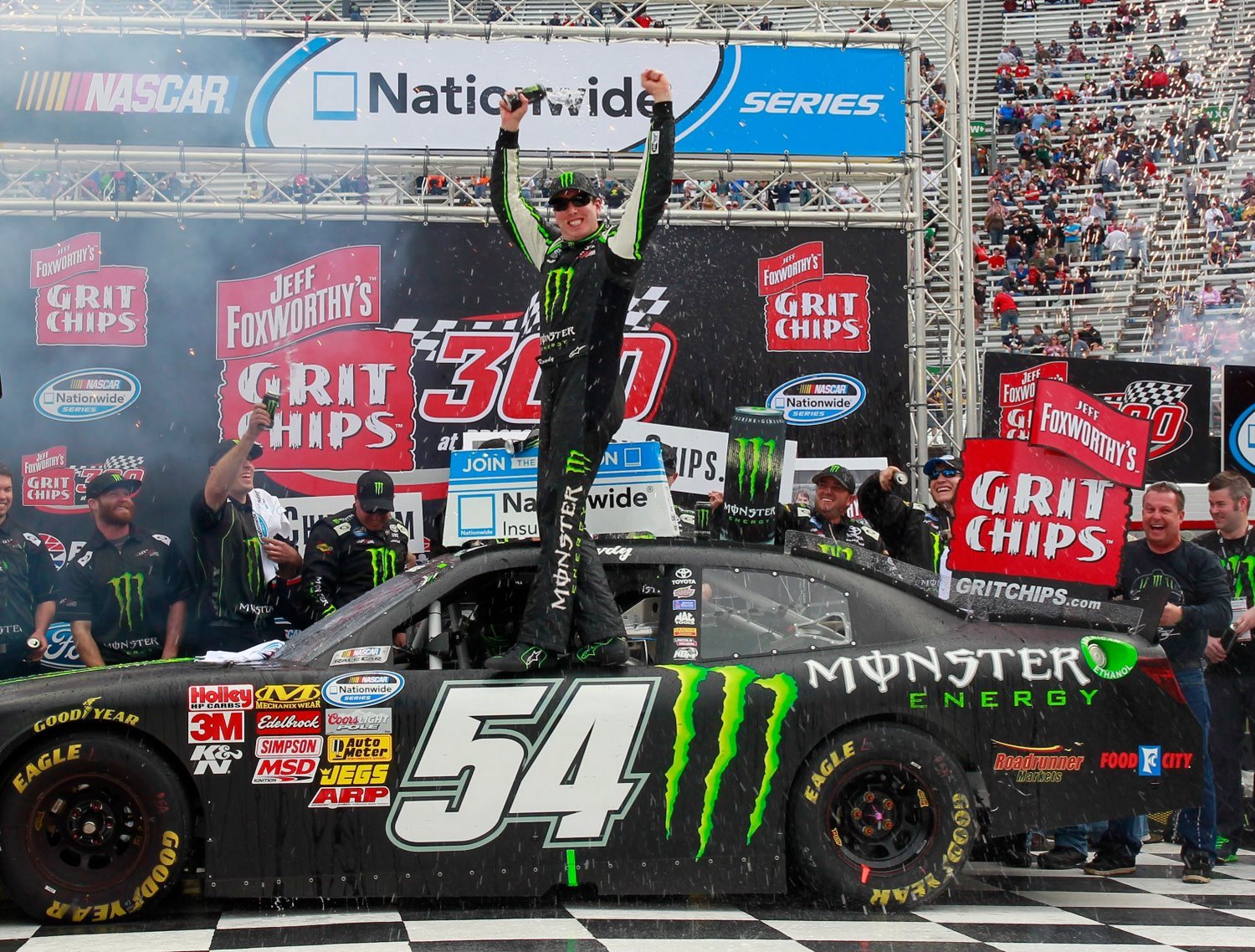 Kyle Busch caught a glimpse of the future, and it was in his rearview mirror coming to the final turn of Saturday’s Jeff Foxworthy’s Grit Chips 300 at Bristol Motor Speedway.

Larson, making his fourth Nationwide start, trailed Busch by five car lengths with 10 laps to go but went high around lap traffic and traded paint with Busch as the two crossed the finish line 0.023 seconds apart, making it the second-closest finish ever at Bristol.

“I did everything I could to try to protect the momentum," Busch said. “A young kid like that, he’s got a lot of talent. He’s obviously made a name for himself. He was running hard, that’s for sure. He brought a lot to the table today and brought his show to the fans. "

Coming to the finish line, Busch had a decision to make: Maintain the high line or go low around the lap car of Brad Teague.

“There were two thoughts," Busch said. “You don’t ever want to give anyone the bottom for a cheap shot. Two, I ran the top in (Turns) 1 and 2 and gained so much ground on (Teague), I was afraid I was going to run into the back of him coming off Turn 4 — or I slow down any little bit and it hurts my run. Then Larson might have enough speed on the bottom to beat me back to the line. Knowing that the start-finish line is only halfway down the straightaway, I just needed to lunge off the corner to make it."

“I tried a couple of moves on Kyle around the bottle and (my car) was just a little too tight off (the corner) to get back to the throttle," he said. "The last lap, I was pretty happy he went to the bottom to block a slide-job or whatever. It gave me one more shot to try to get around him and he left me just enough room to squeeze the outside. I just missed it by a couple of feet, but it was a lot of fun."

Driving the Cottonelle Chevrolet for Turner Scott Motorsports, Larson entered the race simply seeking a solid result after finishing no better than 13th in any of his first three starts.

“We’d kind of been digging ourselves a hole," he said.

Busch, who started 13th, noted that although Larson didn’t win the race, he won a measure of respect.

“You certainly want to win races the right way," he said. “Coming up, running races in the Nationwide Series, Cup Series, I didn’t win a lot, but the ones that I did — there’s a way of going about things. There’s the way I did it and the way (Brad) Keselowski did it — ruffling a lot of feathers.

“(Larson) played it smart today. That was good on his end. I think a lot of people have been looking at him to try to see whether he was going to be a wrecker or a checker. Today he didn’t get the checker. That will come. If you’re driving into the corner and driving into the back of me — I’m going to be here for a while. … He’s not going to have fun dealing with me every week. Right now, I’m going to race him as hard as he raced me but just as clean as he raced me."

Busch, who made NASCAR history at Bristol in 2010 when he became the first driver to win all three national touring events in the same weekend, appears to be in the midst of another potentially dominant weekend. He will sit on the pole for Sunday’s Food City 500 and also turned the fastest laps in both Sprint Cup practice sessions on Saturday.

But Larson turned what looked like a battle between Busch and veteran Kevin Harvick into a three-dog fight.

“I was catching them. I wasn’t sure what I was going to do when I got to them," said Larson, who stayed on the gas as the two leaders battled their way through lap traffic.

Busch led 92 of the first 225 laps, however the run for the money began about Lap 230 when Busch and Harvick approached a five-car group of slower cars. It took nearly 10 laps for the lead duo to clear the pack and, by the time they did, Larson was applying pressure.

Harvick, who led 43 laps, elected to pit under caution with 32 laps remaining. Unable to match Busch’s speed while running low on the track and slated to restart on the inside lane, Harvick elected to take four fresh tires. He restarted eighth and finished fifth.

Brian Vickers and Sam Hornish Jr. finished third and fourth. Hornish extended his series lead to 22 points over Justin Allgaier, the pole-sitter who led the first 62 laps but settled for eighth.