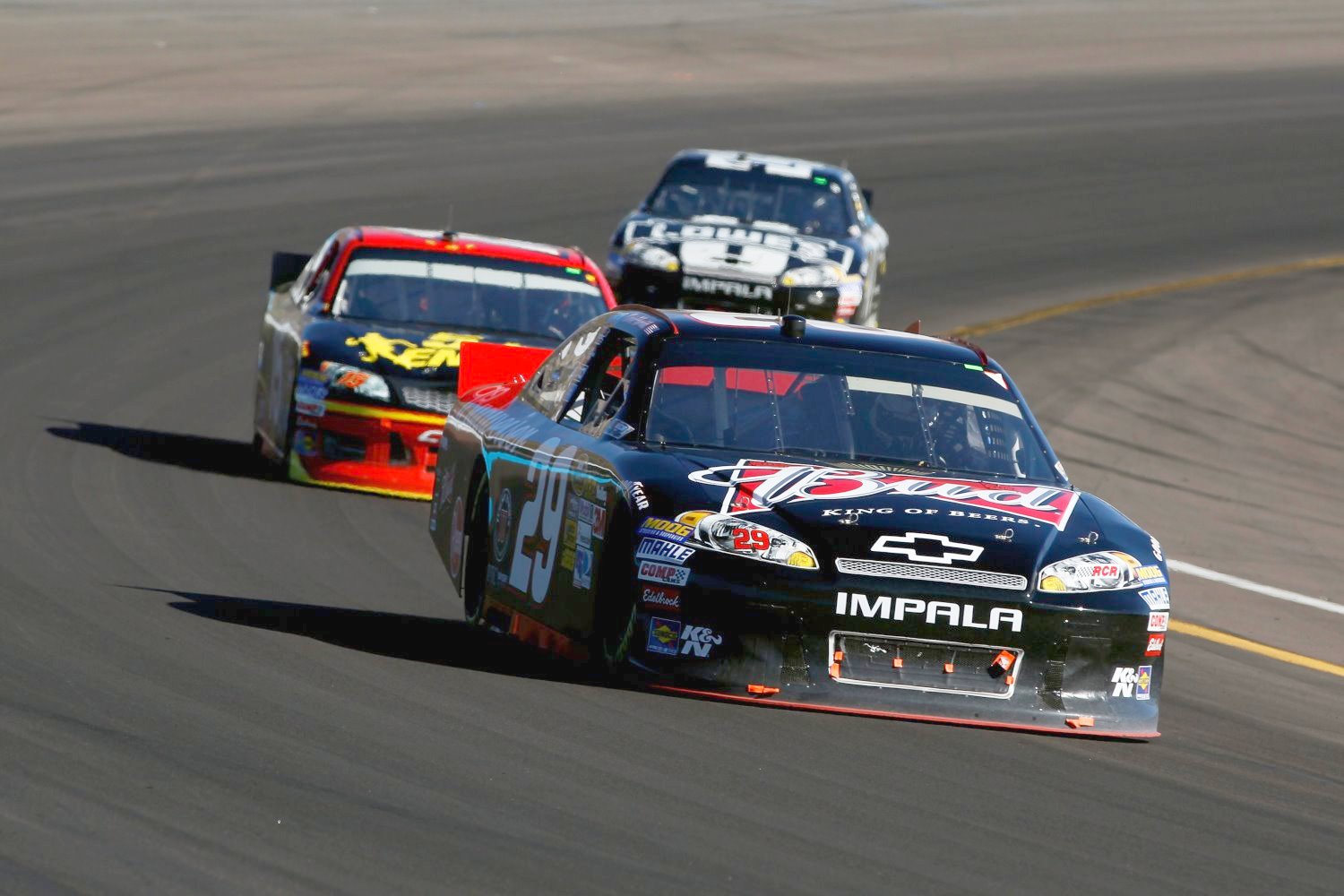 When NASCAR created the Chase for the Sprint Cup in 2004, their hope was to bring new drama to what had become a series of mundane end-of-season title battles.

But it’s doubtful they could have possibly envisioned the drama that unfolded in Sunday’s AdvoCare 500 at Phoenix International Raceway.

Kevin Harvick beat out Denny Hamlin to win the event to snap a 44-race winless streak, all the while avoiding an end-of-race wreck-fest in a green-white-checkered overtime finish that many will say should have been stopped.

And while the battle for the Sprint Cup wasn’t decided on Sunday, but the entire championship picture was turned upside down, with Brad Keselowski taking over the points lead and Clint Bowyer being taken out – literally – of the championship hunt.

Five-time defending champion Jimmie Johnson, who came into the second-to-last race of the season with a seven-point lead on second-place Brad Keselowski, found himself second in points at the end of the day, 20 points behind Keselowski as they go into the final race at Homestead-Miami Speedway next Sunday.

Sunday’s race started out with Keselowski looking to stay out of trouble while keeping Johnson in sight, while Johnson hoped to build on the momentum of two straight victories in the past two weeks that had point him into the drivers seat in the championship battle.

With the points as close as they were, both drivers knew that the slightest mistake could mean the end of the season.

On lap 19, Keselowski was the first to stumble, stalling his car following a pit stop which cost him six spots on the track.

Keselowski would recover, and would eventually briefly take the lead to earn a bonus point which seemed so critical to Keselowski’s championship hopes as Johnson was consistently fast and trouble-free for the first half of the race.

All that changed on lap 235, when Johnson blew a right-front tire coming out of turn four and punched the outside wall, sending him to the garage for 30 laps while his crew made repairs and likely ending what was a perfect season-ending run that saw Johnson win the previous two races.

“We still have to go to Homestead and race and anything can happen down there, but this is not the position we want to be in late in Phoenix," said Johnson. “Unfortunately we lost a lot of control or all control in the championship. We can go down there (to Homestead) and win the race and do everything on our behalf and it still won't net us a championship. So, we'll go down and do our part and just see how things unfold. Today was proof that anything can happen in this sport and we'll see how things shake out at Homestead."

Keselowski, suddenly the points leader and looking to extend his lead, challenged Kyle Busch for the lead and would take over the top spot, leading five laps before giving up the spot back to Busch on pit road.

And just that quickly, the championship momentum had swung the other way.

But the drama was just starting.

As the race wound down the final laps, Busch held the lead for 67 laps when Sam Hornish brought out the caution with 10 laps to go. On the ensuing restart, Busch chose the inside line over Harvick, who powered to the lead on the high side.
Back battling for fifth position, Bowyer and Gordon made contact, prompting Gordon to retaliate, which sent Gordon sideways into the outside wall.

NASCAR would back-flag Gordon, but he was just getting warmed up.

Just a lap later, as Bowyer caught up to Gordon again through turn four, Gordon cut down into him, sending both he and Bowyer into the outside wall, collecting Joey Logano and Aric Almirola in the process.

Gordon drove his battered Chevrolet to the garage, got out of his car, and was promptly met by several members of Bowyer’s crew, touching off a melee that pulled in members from both teams while Gordon was sequestered to safety.

Bowyer got into the fracas as well, abandoning his still-burning car on pit road and running to the garage before behind met by NASCAR officials and security shortly after reaching Gordon’s hauler.

Cooler heads finally prevailed as NASCAR officials restored order, but the damage was done – Bowyer, who came into Sunday’s race third in points, 29 behind Johnson, was all but eliminated from the Chase.

“I mean the racing — it’s just a shame," said Bowyer. “The last person in the world you want to get into anything with is Jeff Gordon on the race track. I didn’t even need to pass him. That’s the thing. All I was doing is riding around biding my time. The only thing I had to do is keep the 5 car (Kasey Kahne) within reach, so for him to act like that — I mean, I barely touched him and then I feel him get into turn three and try to turn me and he missed and then next thing I know Brett’s (Griffin, spotter) telling me on the radio that he’s trying to — he’s waiting on me.

“It’s pretty embarrassing for a four-time champion — and what I consider one of the best this sport’s ever seen — to act like that is just completely ridiculous."

After the race, Gordon was called to the trailer by NASCAR, but was unapologetic over his actions.

“Things have gotten escalated over the year and I have just had it," said Gordon. “Clint (Bowyer) has run into me numerous times, wrecked me and he got into me on the back straightaway, pretty much ruined our day. I have had it, was fed up with it and got him back."

Meanwhile, the race itself still hadn’t been decided, as NASCAR determined Harvick had not crossed the finish line before the caution flag came out, forcing a green-white-checkered finish.

Following a 15-minute red flag, Harvick led the field back to the green flag for the final three laps with Busch again on the inside. Harvick got a good restart, and had Busch cleared by the time the field got to turn one.

Coming around to complete the first lap, Danica Patrick spun in turn four, but NASCAR put out the white flag for Harvick, who came across the stripe just as Hamlin got around Busch on the outside to take second. Patrick was able to limp away but wasn’t able to clear the track as her car crawled down the front straightaway.

As the leaders came through turn four on the final lap, Kurt Busch slid in the oil from Patrick’s wreck and touched off six-car pileup that ended up collecting Patrick’s disabled car as the field piled in across the finish line.

Harvick collected his 19th-career Sprint Cup victory, and his first since last September at Richmond.

“It has been a struggle for the year," said Harvick. “It has been an interesting weekend to say the least, but I know that these guys all want to win.

“Obviously we didn't want to see the red flag. (NASCAR) were really quick to throw the caution and then just let us race through oil. I don't know I guess it's hard for them to be right."

Keselowski received damage from the crash as well, but was able to continue across the finish line in sixth place.
Although he now controls his own destiny going into the final race at Homestead, Keselowski was disappointed in his own performance and how things played out on the track.

“I felt like we had a race winning car and I wanted to take the points lead by winning a race and not relying on a failure (by Johnson)," said Keselowski. “But sometimes that's not how the sport works and you have to accept that. I'm more just disappointed in the quality of racing that we saw today. I thought it was absolutely ridiculous, and I was ashamed to be a part of it."