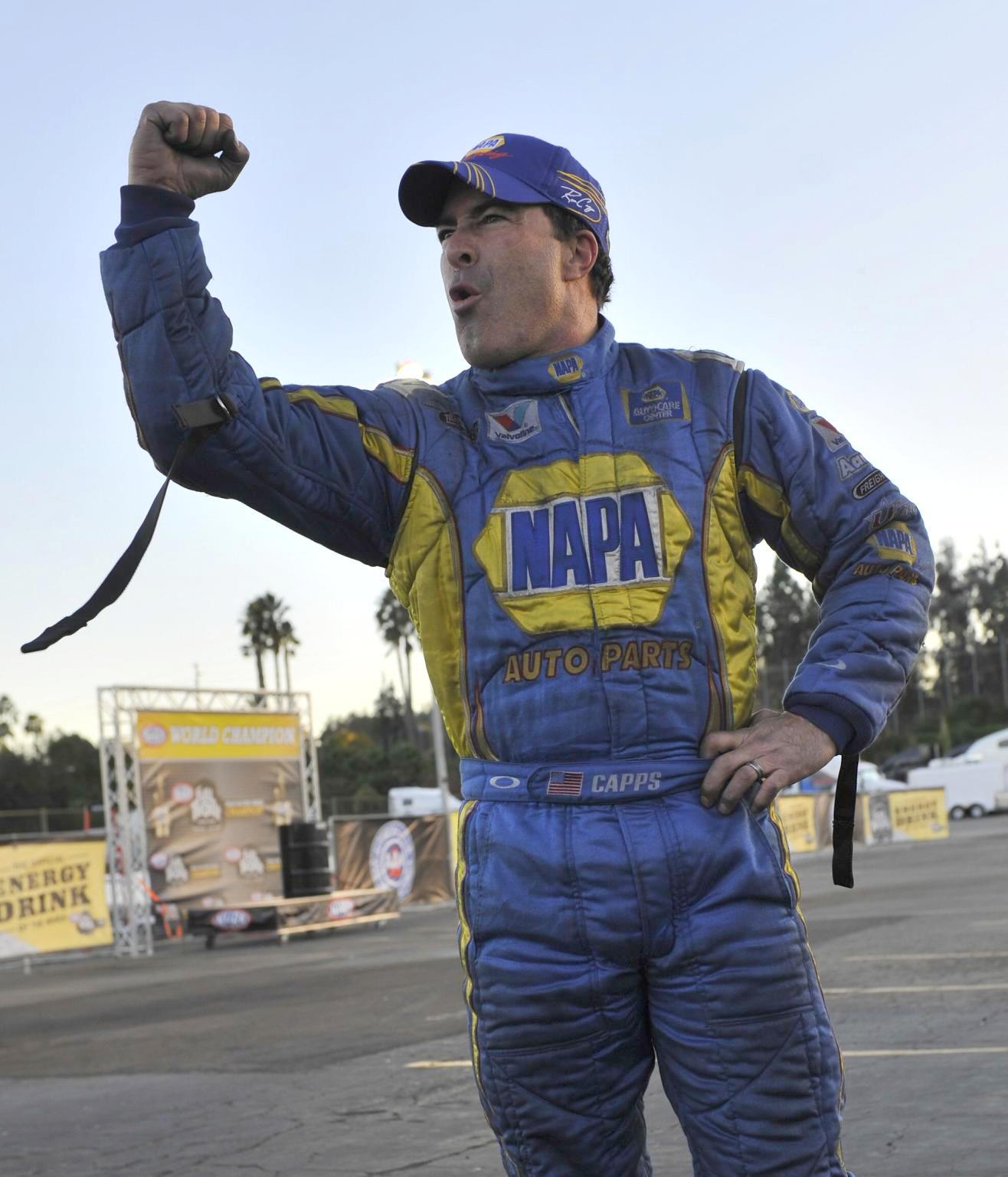 Ron Capps spent three days trying to qualify for the Auto Club NHRA Finals. He finally did it in spectacular fashion on the last of his four attempts at Auto Club Raceway at Pomona and took the battle for the Funny Car championship into Sunday’s 11 a.m. eliminations.

Capps failed to qualify on Thursday and Friday. He was No. 15 in the 16-car field after Saturday morning’s third round and in danger of being bumped from the field in the final round.

Then he earned the No. 1 spot after pushing his Dodge Charger to a track record 4.007-second elapsed time at 319.29 miles per hour and trails series leader Jack Beckman by two points going into the sixth and final round of the Full Throttle Countdown to the Championship and the 23rd race in a season that began here in early February.

Those two points weigh heavily in Beckman’s favor, though. With each round win in eliminations, worth 20 points, they mean essentially that Capps must win one round more than Beckman to claim the championship.

“I think I aged another 10 years these last couple of hours," said Capps, who led the standings with three races to go. “I felt like we were losing the grip on what our plan was. We had such a great plan on Thursday. We were going to make those points up and either be tied or go ahead of him and we failed miserably at that. So this (No. 1) is a confidence builder.

“Those two points, if we go out in the same round tomorrow we lose the championship by two points. So Rahn (Tobler, his crew chief) said ‘hey, let’s go out and win the race.’"

Mike Neff, who qualified 10th, is still in contention for the Funny Car title as well, but at 97 points back needs Capps and Beckman to lose first round and then the Castrol GTX Ford Mustang driver needs to win the race and set a national record.

Top Fuel leader Antron Brown, who is trying to become the first African-American driver to win a major U.S. auto racing championship, will have to do it on the track, too. Al-Anabi Racing's Shawn Langdon claimed the top spot in qualifying with a track record time of 3.730 at 327.82 in Saturday’s final session and Brown was 10th after his Matco Tools dragster blew the engine on his final run.

“Alan (Johnson, team manager) and them are always looking for the big numbers," Langdon said. “They said before the run that it had to go 72 or 73. I knew from the time I stepped on the throttle it was going to be fast."

Brown will go into Sunday 67 points ahead of seven-time champion Tony Schumacher and 70 up on Spencer Massey, his first round opponent. Brown needs to win two rounds to claim the championship regardless of what his rivals do.

Allen Johnson and Eddie Krawiec don’t have to worry about their title chances anymore. By qualifying for the eliminations, Johnson clinched his first Pro Stock title and Krawiec won the Pro Stock Motorcycle crown for the second year in a row and third time since 2007.

Line took the top spot in the Pro Stock field Saturday morning by setting a pair of track records with a performance of 6.517 at 212.69 in his Summit Racing Chevrolet Camaro and that time stood up through the afternoon session.

Closest to Line was Johnson, with a 6.518 that put his Team Mopar Dodge Avenger in the No. 2 spot.

“I can’t say enough about this entire team," Johnson said. “I didn’t do any of this. It’s due to the hard work and dedication of all of them. I’m just the driver, that’s it."

Hines and Krawiec played “can you top this" in the final round of Pro Stock Motorcycle qualifying and even though Hines emerged as the top qualifier, Krawiec was the big winner. Krawiec, fifth in the field when the fourth round began, jumped to No. 1 with a run of 6.811 at 196.59 on his Screamin' Eagle Vance & Hines Harley-Davidson. Hines reclaimed the top spot he had held since the opening round with a track record time of 6.809 at 196.53. But the move from fifth to second gave Krawiec the points he needed to clinch the championship over his Screamin' Eagle Vance & Hines Harley-Davidson teammate.

“The most important thing is that this is a team effort," Krawiec said. “It’s a big deal for our team. We come out here all year and work hard and give it 100 percent and I get the glory, but I want the glory for the whole team."