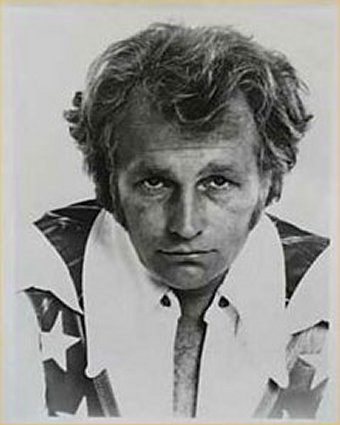 So I’m sitting in a Bob Evans restaurant in northern Virginia hoping for a decent breakfast before going to the track for the Super Cup race I was competing in that night. I’d just ordered three eggs over medium, sausage and rye toast very well done with extra butter when my daughter suddenly points at the ceiling and says, “Look, Dad!"

I glance upward and am astonished by its splendor. Colored red, white and blue, it is battered and worn yet still proud after nearly 40 years of service. I am in awe. There it is…

I get up to walk across the restaurant for a better look and am immediately swept back in time. The mere possession of this lunchbox in Mrs. Decker’s third grade class at Center Grove Elementary in 1974 made its owner an instant BFS (Big Freaking Stud).

Thankfully, at age nine I still viewed Robert Craig Knievel through the eyes of a child. Some will now consider him an egotistical, big-mouthed drunkard. I won't argue. But to me, Evel Knievel was king. He was the coolest man on the planet.

Later that summer my parents bought me Ideal's coveted Evel Knievel Stunt Cycle, which I still regard as The Toy of the 20th Century. My Evel Knievel successfully jumped over all the cars from my Kenner SSP Smash Up Derby set.

My Stunt Cycle also jumped over a carefully placed cereal bowl filled with water and two miniature plastic fish posing as lemon sharks. If that makes perfect sense to you, then you are a real Evel Knievel fan. If I have to explain it to you, then you wouldn't understand.

Knievel was the rarest of athletes in that he essentially created his own sport. Thanks to his antics, showmanship and swagger, motorcycle jumping had a brief but torrid heyday from the late 60's until Knievel's retirement around 1980. Motorcycle jumping was front page news for nearly a decade.

Today, motorcycle jumping has only a cult following and performances are rare. Daredevil Bubba Blackwell is jumping in Texas and Oklahoma in October. Now in his sixties, veteran stuntman “Big Ed" Beckley is jumping again. Evel's son, Robbie, jumped last year. But they are the exception, not the rule. Today's crowds are smaller. It's hard to find paying gigs.

The modern media ignores motorcycle jumping entirely unless someone gets killed, in which case they go into their well-rehearsed demand for some overpaid fool in a government agency to make a new law.

The sport is dying. If you're a motorcycle jumping fan, go see a jump while you can still find a few of these famously cheesy yet daring events. Start here and here. Time is short. Your grandchildren probably won't recognize Evel Knievel's name.

I once saw an interview in which Knievel was asked why he jumped motorcycles. He answered, “Don't ask me why I do what I do. I do what I do because I'm Evel Knievel and I don't question it."

Fewer and fewer people follow their passions today. People don't do the things they dream about, they just do what they're told. They line up in droves to take out student loans they cannot repay to get a job they don't like in the forlorn hope that the same system that has indebted a nation will somehow produce happiness and prosperity for them.

I'm certain to get tidal waves of email pointing out Knievel's faults. All of them will be right. But they miss the whole point.

I choose to dismiss what I cannot change and instead remember the singular virtue that in my mind made Robert Craig Knievel a great American… he rebelled against the system. He followed his dream, not the culturally prescribed, 9-to-5, debt-ridden nightmare that most people mistake for a life.

For all of Knievel's weaknesses, he left his gritty individualism and independence as a lasting legacy for the next generation. That next generation is us. We have not done well with it.

I look around for new Evel Knievel's today but see few candidates. Our politicians are wax figures. Our athletes are prima donnas. Our intellectuals are unemployable students educated beyond their capacity. And our celebrities are… Kim Kardashian and Paris Hilton? At least Knievel jumped over something.

The rank-and-file has done no better. Office buildings around the country are crammed with disillusioned employees who ignored Evel's advice. They hate their jobs because they did as they were told and settled for a living instead of a life.

We don't live our dreams anymore. It's too hard. We live other people's dreams through reality TV and People magazine.

We could use another Evel Knievel today.

Right now, all that's left is his lunchbox.