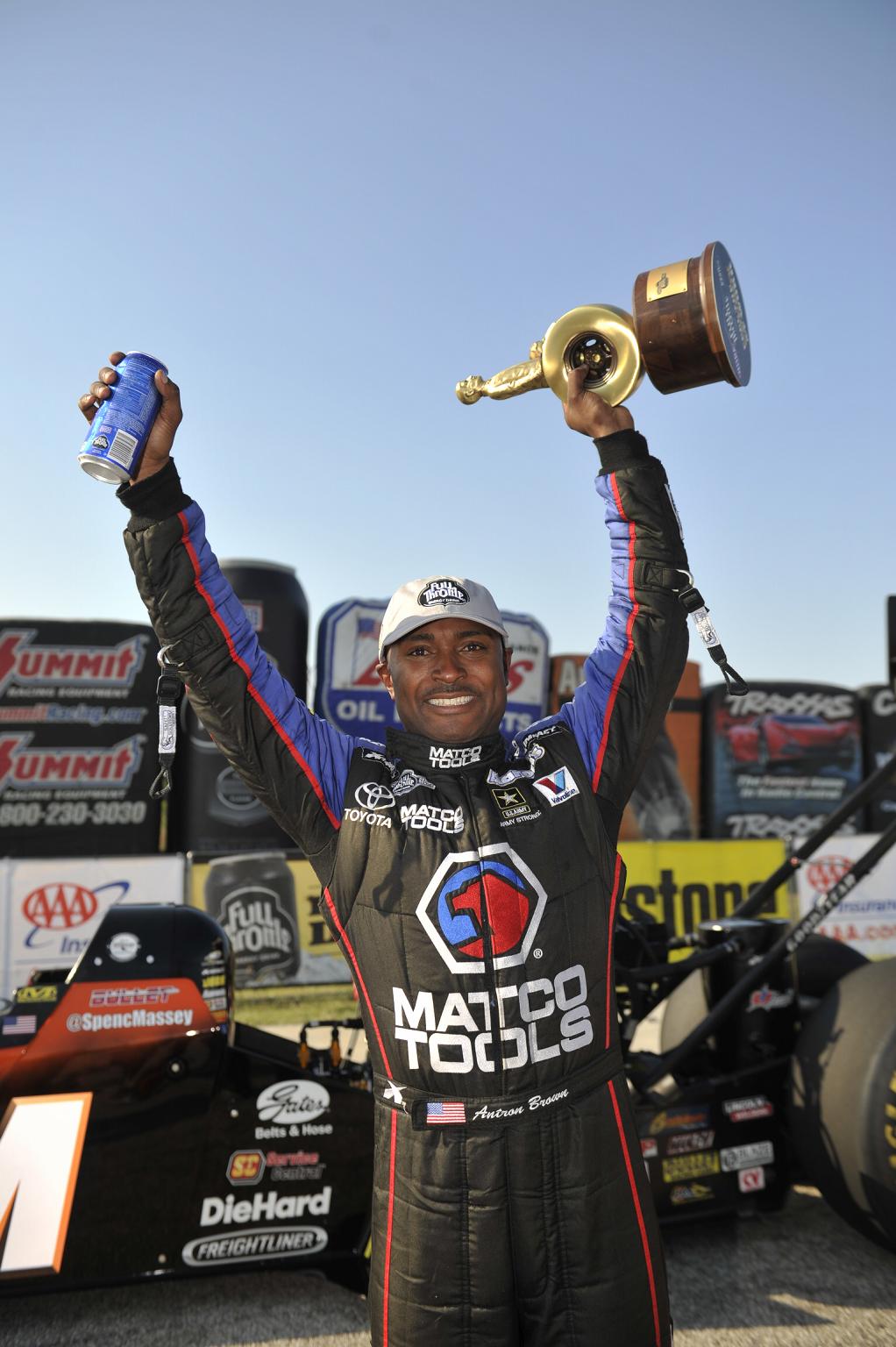 Brown claimed his fifth victory of the season and moved into a tie for the points lead with the driver he beat in the final round, teammate Spencer Massey. Brown powered his Matco Tools dragster to a 3.898 second run at 311.49 mph to hold off Massey’s FRAM dragster, which finished with a 3.945 at 300.60.

Brown and Massey lead seven-time world champ Tony Schumacher by 24 points and the suddenly surging Shawn Langdon is 41 back as the playoff race in the 8,000-horsepower category gets intense.

“This is definitely the way to rebound," said Brown, the playoff top seed who dropped to fourth in the standings after a first round loss at the playoff-opener last weekend in Charlotte, N.C. “I have to give credit to my team for sticking together. We were winning in the first round in Charlotte when we broke an input shaft. It’s so easy to get down after something like that. We came here, and the car was throwing us fits by being overaggressive. Brian [Corradi] and Mark [Oswald, co-crew chiefs] kept backing it off until they got a good handle on it in the semis."

Funny Car featured a final round battle between two drivers who aren’t in the Countdown playoffs, as Tasca prevailed in a tire-smoking final round duel with defending world champ Matt Hagan. Both cars lost traction near mid-track, but Tasca was able to guide his Motorcraft/Quick Lane Shelby Ford Mustang to the finish line in front of Hagan’s Aaron’s/Mopar Dodge Charger.

Tasca outran Alexis DeJoria, top qualifier Courtney Force and defending event winner Cruz Pedregon to advance to the final round. Tasca was very proud of his team’s effort in taking out two top Countdown contenders and claiming the team’s first victory of the season and fourth of his career.

“This weekend just kind of epitomized our whole season, just keep fighting," Tasca said. “We have as much fight now, and I think we’re more determined now than ever before. Not making the (Countdown) was a lot of heartache for the guys on this team. I said to my team, ‘This will be a defining six races because I want to see what we’re all made of, me included. Are we going to roll over and play dead these next six races, or are we going to come out with some fire in us and take this thing to Pomona and let everyone know that we may not be in this year but watch out next year.’

Series leader Ron Capps, who lost to Hagan in the semifinals, increased his Countdown playoff lead to 96 over second place Mike Neff, who lost in the second round to Pedregon. Saturday’s Traxxas Nitro Shootout winner, John Force, lost in the first round to Hagan.

Johnson earned his fifth Pro Stock victory of the season and first in the Countdown playoffs by outrunning local favorite Erica Enders in the final round. Johnson’s Team Mopar Dodge Avenger pulled away at the start and finished with a 6.598 at 210.93, while Enders’ GK Motorsports Chevy Cobalt slowed to a 6.835 at 209.39.

“I looked at the elimination ladder last night and thought, ‘Oh, my, I’m going to have to work for this one,’" Johnson said. “We just took it one round at a time without getting ahead of ourselves. Somebody who’s won several championships called me before this thing ever started and told me, ‘Just enjoy it, and have fun.’ That advice was very important. I'm up for this challenge, and I'm enjoying it."

In Pro Stock Motorcycle, Texas native Ray claimed his first career victory, powering his Viper Motorcycle Company/GottSpeed Racing Buell to a performance of 6.920 at 192.77 to hold off Karen Stoffer’s GEICO Suzuki, which trailed with a 7.028 at 190.48.

“It’s really surreal, and I don’t think it’s really sank in yet that I’m getting to go home with the biggest thing that I’ve worked my whole life for," Ray said. “When we got here this weekend, we knew we had a great bike that could go out there and be competitive, coming off our performance in Charlotte. I just knew that as long as I just kept my cool and rode the bike consistently there’s not a better tuner out here when it’s hot than Matt Smith, and I think we showcased that today."

Ray, who beat Scotty Pollacheck, Hector Arana Jr., and Andrew Hines to advance to his second career final round, moved from seventh to fourth in the standings with the victory. Points leader Eddie Krawiec increased his championship lead to 11 over second place Hines.