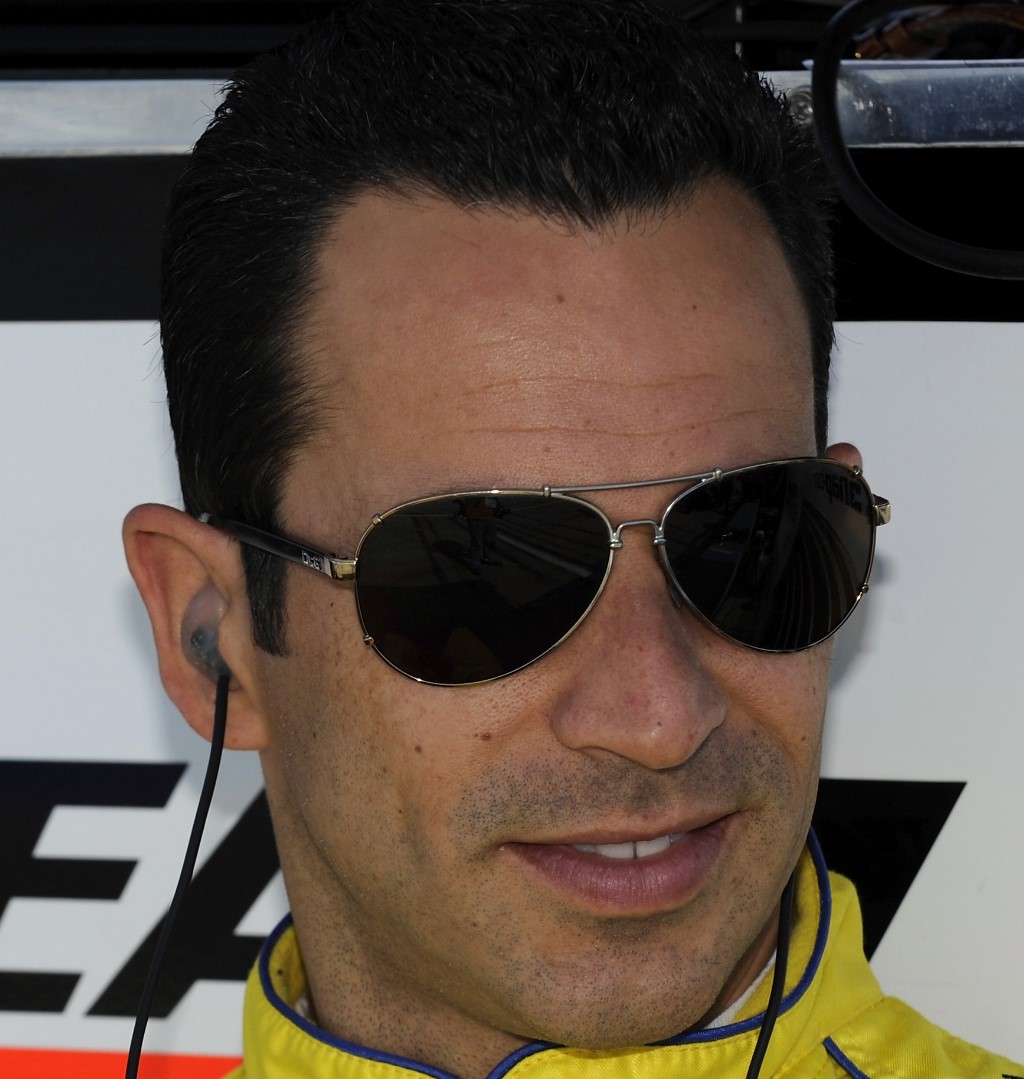 Earlier today, IZOD IndyCar Series driver Helio Castroneves participated in an INDYCAR Conference Call to discuss his participation in the new season of "Dancing With the Stars: All-Stars." Castroneves, who won Season 5 of ABC's celebrity ballroom dancing competition with professional dance partner Julianne Hough, will be paired with Chelsie Hightower this season. Castroneves and Hightower will compete for the first time Monday, Sept. 24, on ABC. Check local listings for the time in your area.

THE MODERATOR: Welcome, everybody, to today's IndyCar conference call. We're joined today by IZOD IndyCar Series driver Helio Castroneves of Team Penske who is preparing to enter a different kind of competition the latest season of "Dancing With The Stars: All-Stars."

Helio did win season five of "Dancing with the Stars," the celebrity ballroom dancing competition on ABC with his professional dance partner Julianne Hough. For this All-Star season he is partnered with Chelsie Hightower and it's the first All-Star season of the show.

First, Helio, I know the racing season just ended. How do you transition from driving 200 miles an hour to a ballroom dance?

HELIO CASTRONEVES: To be honest, with Chelsie Hightower, the transition, it didn't slow down at all. We were going from 220 mph on the racetrack, and literally, we continued 200 mph on the dance floor. She is definitely an incredible talent. I'm extremely happy to have her as my partner. I'm having a great time.

She's certainly pushing the limits. I'm feeling (it) right now in my legs, everything in my body. I like it. I like the vibe, the attitude. We're really connecting well. So I guess this is what we need to start good the season.

Q. Is the rhythm of the show, between rehearsing, interviews, tapings, is that similar to what you experience in the IZOD IndyCar Series each week between practice, qualifying and the race?

HELIO CASTRONEVES: Yes, it's very similar. It's very interesting to see the dynamic. The sports are completely different but overall they do look alike, even the details on practice, even the hard work, the commitment from both partners.

That's what I enjoy most, to be honest, because when you get a special move that she invented in choreography during the session, it's like a lap that you find a shorter line and things like that.

So it's fun. That's one of the things I'm enjoying at this point. Again, it's fun. It's really, really fun. Certainly it's hard work.

I'm really doing everything I can to throw the word out and make sure that everyone kind of like dials the number, I don't know the number yet, but as soon as I know I'm going to start talking about the number. But certainly we are going to need a lot of votes because it's going to be an amazing season.

Q. I know you've dropped the word 'fun' about 17 times already. What is it that most drives you? Is it the fun? Is it the competitive nature of you? Is there something else?

HELIO CASTRONEVES: Well, there are several things. One of the reasons that (I am) coming back, (is) certainly (I am at) the different phase of my life. I have a little girl now. I've been taking her a lot to the races. I wanted her to see something else than only racing.

Obviously, I will support her whatever she choose in her life, but certainly it would be great to show her something different.

I mean, it's a great exercise, a great workout. It's a lot of fun, like I said. There is different techniques, different little things similar to racing. It's a great therapy. It's a great thing in your mind you can go out there not thinking about anything else. Trust me, when you practice four hours a day, which actually is light, I mean, it is crazy.

That's one of the reasons I decided to do it. Plus for (the) sport (of Indy car racing) I think it's been a great thing. It's been five years (since) I've done that. (The) All-Star season is certainly going to call a lot of attention. I believe it's great for the (IZOD IndyCar) series and great for my name as well.

There are a lot of things involved that helps. That's some of the reasons that I'm back in the game.

Q. Where do you keep your Mirror Ball trophy? Is it next to your Baby Borgs?

HELIO CASTRONEVES: Yes, believe it or not, I am very proud of winning "Dancing with the Stars." My trophy is right there between my three Indy (500) trophies. To match and to balance it out, we need another Mirror Ball trophy and that would be great.

Q. You've accomplished so much in your racing career. You had your own fan base from that. You were fairly recognizable. Once you did "Dancing with the Stars," how much did your fame change? How long did it take for you to notice it? I suppose it's two different demographics.

HELIO CASTRONEVES: You're spot on. After winning two Indy 500s, before I won three, certainly a lot of people knew me. Motor racing, it's a huge community, but it's still a very small community compared to when you're going to national TV and have 25 million to 30 million people watching you every Monday and Tuesday. It's variety.

When I staying for about two months last time on "Dancing with the Stars," I guarantee, people that didn't watch all the shows but one Monday or one Tuesday, somebody (ended) up watching saying, 'OK, I know this guy.'

Eighty (80) percent (of) the recognition (I get) today, it's coming from "Dancing With The Stars" because of those scenarios. I (got noticed) right away, as soon as I won season five, actually (by) a lot of people, especially the female public. (They say) 'I want to see how you're going to race, thing(s) like that. They're telling me in the autograph lines, things like that.

Certainly it changed (my profile) a lot and I'm very grateful for that. So now doing it again with a very special cast, I think it's going to be even bigger. I can't wait. Tell yourself and your daughter to vote.

Q. Is it a large platform? Do you have a lot of opportunities through "Dancing with the Stars" to promote IndyCar and make people aware of what your full-time job is?

HELIO CASTRONEVES: They are open to do that. Certainly we're not allowed to put brands and names (on the show). To say I'm an INDYCAR driver, they sometimes want to be more like race car driver.

But I have to say the league and even from ABC production, they're willing to help out. I understand they're asking images (of) me winning races, which is perfect. This is just a perfect tie for what we need for (the IZOD) IndyCar Series to continue to grow.

I do believe this is going to help (the series tremendously), even more with upcoming movies and things like that. Certainly I'm excited. I want to help as much as I can because that's my work.

Q. You took tires the other night. You were coming quickly. Do you think you could have caught (Ryan) Hunter-Reay if the yellow hadn't come out?

HELIO CASTRONEVES: I think so. The car was very good. Remember, the Firestone tires, they're very good, especially when they're brand-new. It was a gamble that we decided to do it.

We're still debating if it was too much of a risk. But I believe one more lap I would be able to do it, which unfortunately I don't think it will make a difference. I think would have to finish (sixth) to win the championship.

It was a great job for Andretti Autosport. Hunter-Reay, a great battle, (he) never (gave) up. I think it's great for our (racing) community because he's an American. Having an American winning the season, I guess it makes more people interested, especially in new talent. Same for Will (Power). He did a helluva season.

That's why we got to bounce back and hopefully next year we (can) bring the championship to Team Penske.

Q. Obviously this season you have a different partner. I can imagine it's like working with a different teammate on the racing team. Talk about of the differences between Chelsie and Julianne.

HELIO CASTRONEVES: Julianne (Hough) certainly had experience. Even when I joined, it was her second season (on the show). Somehow it's one of those talents that her brother (Derek) and Mark (Ballas), her partners in the past, they trained together. They are very good in choreography. They're very good in knowing your partner, how to teach as well. One thing is you dance really well, and another thing is to teach somebody to dance really well.

With Chelsie, it's amazing. It's like the new racing team. (She's an) amazing talent. She only wants to dance. Sometimes I'm like, 'Look, we have to relax a little bit.' Even though I did a season, there's still moves I don't understand. She's on it.

What I like most (about) her, it's her vibe, the attitude, the way she explains (things). She likes to run through everything, then (she) goes for sections. For me it's good because I kind of know where I'm going first. Because already the steps are similar to five years ago, muscle memory is working, so we're able to speed up kind of quite fast the process and understand what we need to do.

Now she likes to make me feel comfortable, and I really like that as well. She pushes (me) to the limit. Sometimes when I see she's changing something, I'm like, 'Please, don't do that.' But I believe that's the strategy for this season and that's why she's pushing me so hard so we start in a good note and keep growing from there.

Good styles in terms of beginning, but same talent in terms of dancing, same work ethic. I guess these dancers, they're amazing athletes. I'm honored to be part of this group.

Q. Before we let you go, what a lot of people want to know is are we going to see the famous yellow suit during the season?

HELIO CASTRONEVES: I'm not sure if the rules allow you to bring back the same dance or the same costume. I mean, the costume would be OK, I believe, but I don't think you can make the same dance.

For sure it would be great, but we also want to do some other (memorable) dances that would make people enjoy it. You guys got to watch out because Monday is going to be the beginning of a great All-Star season on Dancing with the Stars.

THE MODERATOR: Seeing as there are no more questions for Helio, we will wrap-up today's IndyCar conference call. I know you have a busy day of rehearsals. We wish you the best of luck Monday and for a long run on Dancing with the Stars All-Stars.

HELIO CASTRONEVES: Thank you very much and don't forget to vote.