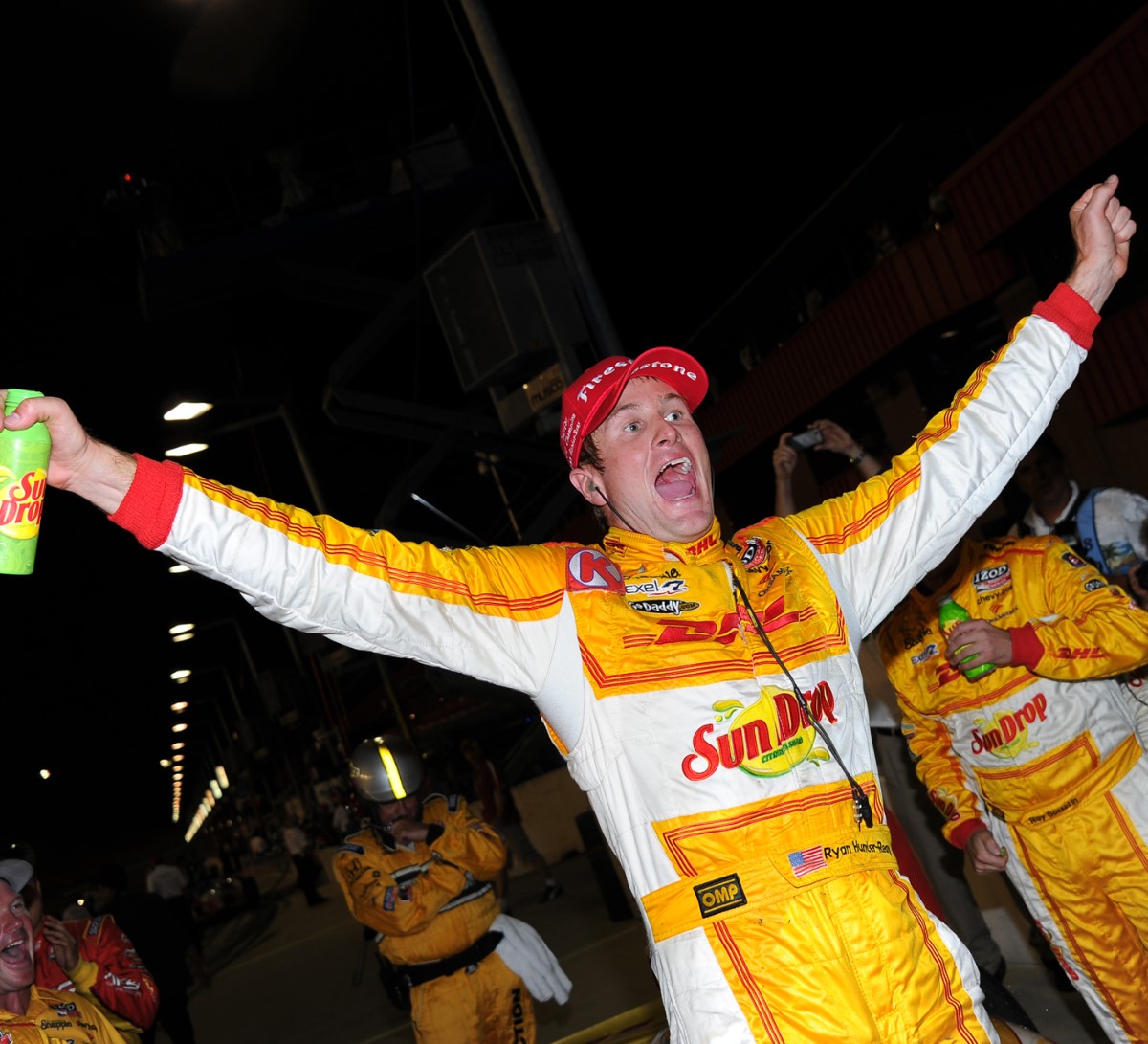 Nothing risked; nothing gained.

"Really, it's a lot like my career," Hunter-Reay adds two hours after snuggling up to the Astor Cup by earning his first series title in most astonishing fashion.

Hunter-Reay – albeit in the throes of surprise championship celebration syndrome – is reflective as the final TV lights of his long day are turned off. More interviews, more blinding lights are forthcoming in New York during the Champion's Tour, including a guest spot on "The Late Show with David Letterman" on Sept. 20.

Hunter-Reay, 31, extols that "never give up" message through his active support of Racing For Cancer and LIVESTRONG, which he adopted as his credo when finding an avenue back into Indy car racing after the 2005 Champ Car season.

"Never give up is a big part of what I believe in in so many ways, and definitely fits the cancer side of it," said Hunter-Reay, whose mother, Lydia, died of colon cancer in November 2009. "This year, we had to come back numerous times. We had some unlucky breaks early in the season. To bounce back from being seventh in the points to leading the championship, losing that lead and then gaining it back is massive."

Hunter-Reay, who signed a two-year contract extension with Andretti Autosport on Sept. 14, wrapped up the series title by three points with a fourth-place finish in the MAVTV 500 INDYCAR World Championships at Auto Club Speedway after Team Penske's Will Power crashed on Lap 55 of the 250-lap test of stamina and will.

It was the seventh consecutive year that the championship was decided in the season finale, and the margin was the closest since 2006 (when Sam Hornish Jr. won on a tiebreaker).

"I always believed that if I got the right opportunity and worked hard enough that I could be in this position or I could be in the position to win races," Hunter-Reay said. "But then you go from winning races to competing for a championship, and that comes with another level of consistency.

"That comes from the continuity and a team that believes in you, and a group like we have in the (No.) 28 car where things are working. You build on that year after year. That's why we're in this position now. So just never give up. It's really nice to have this now to make that all come to fruition."

In 2006, it didn't appear likely that the Floridian would be wearing a red champion's cap. Contemplating his future following losing his third ride in three years, "I definitely grazed the bottom, I think."

He raced sports cars and was a test driver for the Hendrick's stock car program – anything to keep his name at the forefront of prospective employers. That call came from Bobby Rahal in July 2007, and Hunter-Reay's return to Indy car racing came at the Mid-Ohio Sports Car Course a few weeks later.

Despite running a limited schedule for then-Rahal Letterman Racing, Hunter-Reay received the Rookie of the Year award (four top-10 finishes in six races). In '08, he finished sixth in his first Indianapolis 500 and won at Watkins Glen International.

"I kept at it, made sure I was at the racetrack putting a good face on and telling everybody that would listen that I'm ready to go if you want to drop me in the seat," he said. "I talked to Bobby Rahal early in '06 and early in '07 and told him if you ever need somebody last minute to jump in and go, go, go, I'm there for you.

"And I got the call middle of the way through the '07 season, and I really credit Bobby for that. He brought me back into Indy car racing."

Added Rahal: "Ninety percent of being successful in racing is having the fortitude, commitment and drive to keep going, no matter what."

But just when momentum appeared to be on his side, sponsorship evaporated with the Rahal team. Tony George's Vision Racing team offered Hunter-Reay a six-race lifeline to start the 2009 season, and he then moved to A.J. Foyt Racing to fill out the season after Vitor Meira suffered fractured vertebrae in the Indy 500. After the October finale, Hunter-Reay again was looking for a long-term commitment.

Andretti Autosport offered Hunter-Reay one of its cars alongside Marco Andretti and Danica Patrick. A victory on the streets of Long Beach spurred full-season sponsorship from IZOD, and he's been a versatile performer in the intervening events.

"This is just amazing," he said as the TV crew packs up. "This is what racing is about, what sports are about. I've always looked up to the American drivers when I first started this whole deal as a fan of the IndyCar Series. Before I raced goâ€'karts I followed the American greats. That really appealed to me.

"Now here I am on the other side, and I see these kids that are looking up to us drivers. It's so cool being on the other side of it all. I feel like I'm up against the best in the world. It's just amazing to get it done."

Hunter-Reay will make his 50th Indy car start with Andretti Autosport in the 2013 season opener and an immediate goal is an Indianapolis 500 triumph.

"Indy is the big one for sure," he says. "A championship is big, but Indianapolis is massive. That's what we're gunning for and hopefully we'll be fighting right up there on the front row like this year and win it."