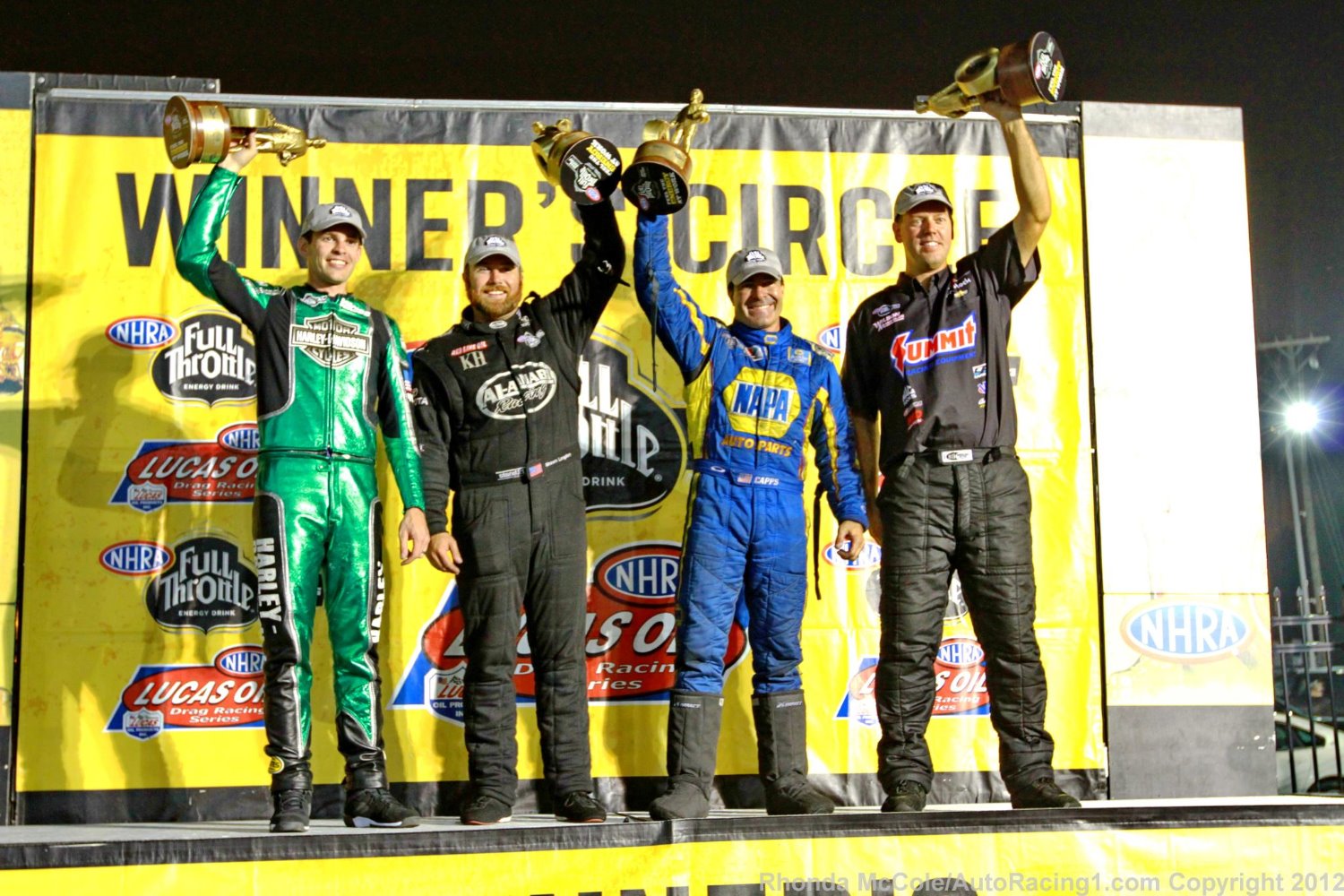 Following a three-hour rain delay and under increasingly cloudy skies, the opening round of the six-race Countdown to the Championship wrapped up under the lights at the “Bellagio" of drag strips with a first-time Top Fuel winner and a new Top Fuel points leader.

Langdon, who came into Sunday’s eliminations as the no. 1 qualifier, knocked off Chris Karamesines, Bob Vandergriff and Brandon Bernstein to advance to his sixth-career final round appearance while Schumacher, who beat out David Grubnic, Morgan Lucas and Spencer Massey, reached the finals for his 117th-career money round.

Meeting in the finals for just the second time in their careers, Schumacher jumped out to a slight advantage at the start, but Langdon came back to track him down, going 3.785 at 326.71 to win by one foot in a close race over Schumacher, who went 3.808 at 322.27 mph in the loss.

"I'm a firm believer that everything happens for a reason," Langdon said. "87 races into it, I've always kind of wondered, 'Man, what does it feel like? Why haven't I won? Is there something I'm doing wrong?' I had a car capable of winning at times driving for the Lucas family for three years, and I came to this team that Sheikh Khalid [Al Thani, team owner] and Alan Johnson [team manager] that was built around winning. It gets to the point where it's the Countdown and it's crunch time. You couldn't have scripted it any better. It's a surreal feeling."

With the loss, Schumacher took over the points lead over Spencer Massey and Langdon, while Antron Brown – the points leader coming into Sunday’s eliminations – dropped to fourth after a first-round loss.

Ron Capps picked up his first zMax victory with a win over Mike Neff to claim his fourth victory of the season and retain the points lead in Funny Car.

Capps, the fourth quickest in qualifying, eliminated Jim Head, Cruz Pedregon and defending event winner Matt Hagan to move on his 76th-career final round and his third versus Neff, who won out over Johnny Gray, John Force and Jack Beckman to reach the finals for the 21st time in his career.

In the final, Neff struck the tires right at the green light and backed out of the throttle, giving an easy victory to Capps, who went 4.067 at 315.49 for his 37th career NHRA win and stretch his points lead by 73 over Neff.

"We were pretty pumped up," said Capps, who beat Jim Head, Cruz Pedregon, and Matt Hagan in early rounds. "It just happens so fast, but what a race car. The car gives me confidence, but I learned a long time ago not to get overconfident. I was still a nervous wreck before the first round. I don't take anything for granted. Mike Neff is a guy who can throw down at any time. He ran the table and won the race in Indy, and, lo and behold, we were able to gut it out without lane choice in the second round in the semis."

Defending Pro Stock champion Jason Line tightened up the points battle with a victory over points leader Allen Johnson to collect his second win of the season and 29th of his career.

Line, the 2011 runner-up at this event, scored round wins against Frank Gugliotta, Larry Morgan and Warren Johnson to advance to the money round for the sixth time this season and his fifth against Johnson, who took down Jeg Coughlin, Mike Edwards, and top qualifier Vincent Nobile.

At the start of the final round, Johnson’s Dodge Avenger immediately jumped to the right, forcing Johnson to push in the clutch and end the run, while Line screamed to the finish line to post a 7.518 at 200.20 mph and cut his points deficit over Johnson to just three points.

“Winning this race is a big way for us to start the Countdown but it doesn’t mean a whole lot unless you can keep going," Line said. “To get any kind of lead at all is a good thing. Right now, the top six cars are all so good that whoever lets the clutch out first is usually going to win. That’s a lot to ask from anybody."

In Pro Stock Motorcycle, Andrew Hines went wire to wire to pick up his fifth victory of the 2012 with a holeshot victory win to finally beat teammate Eddie Krawiec.

Hines, who entered as the no.1 qualifier, opened Sunday’s eliminations with a bye run, then defeated Shawn Gann and Hector Arana to go up against Krawiec, who advanced with wins over LE Tonglet, Scotty Pollacheck and Hector Arana, Jr.

Facing each other in the final round for the fourth time this season, Hines left the line first with a .010 light and for the first time this season topped Krawiec, beating him to the line by less than a foot, posting a 6.862 at 194.49 mph to Krawiec’s faster 6.858 at 195.14 and cut Krawiec’s points lead to 10 points.

“To get this win over Eddie (Krawiec) in the final was big for me, because he beat me in three finals earlier this year," said Hines. “It was getting a little old – I was tired of being runner-up to Eddie, but I still didn’t outrun him. He’s got a tough bike to beat, and he’s obviously the bike to beat in the Countdown, being number one in the points.

“It was gratifying to get him on a holeshot. I said it was going to take anywhere between a .005 and a.012 on the reaction time to get a win. I came up a .010 on the tree, and I knew I needed everything I could get and luckily I got the fourth win light of the day."