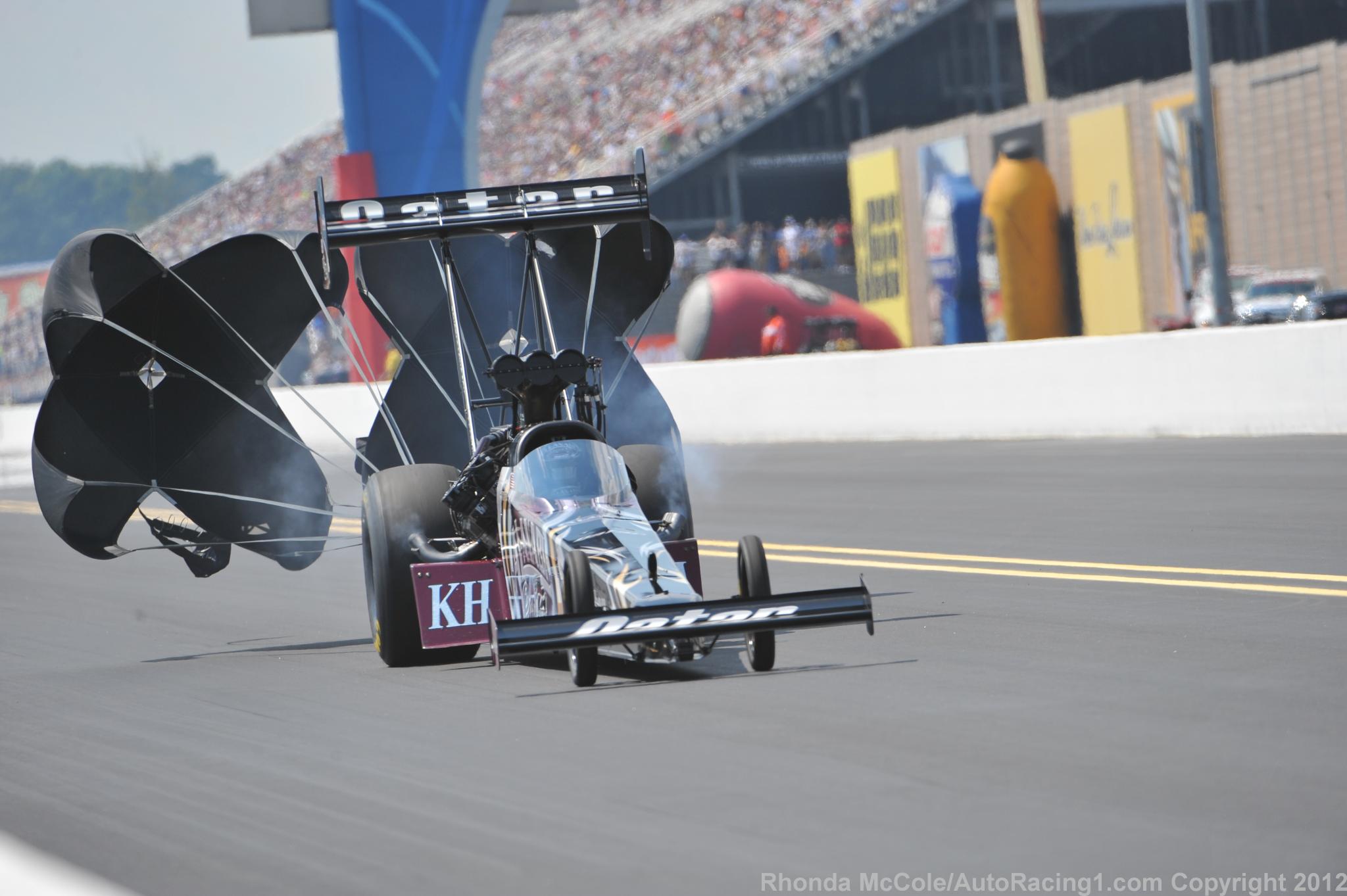 All four drivers held their no.1 qualifier spots from Friday’s qualifying session as the top five in all four divisions remained mostly unchanged for Sunday’s eliminations – the opening race in the six-race Countdown to the Championship.

Langdon raced to his second straight no. 1 qualifier position and third of the season, topping out in Friday’s session with a 3.807 at 324.12 mph, marking his fifth-straight top-five start while seeking his first-career Top Fuel victory.

"We made a pretty good run on Friday night and got acclimated to a hotter racing surface today," said Langdon. "I think tomorrow will be a lot like it was today. We have some work to do to run better in the warmer weather, but [teammate] Khalid alBalooshi made a couple of nice runs today that give us some good info. Sheikh Khalid [Al Thani, owner] built this team around winning, and we're hoping to achieve that in a short amount of time. We're heading in the right direction."

81-year-old Chris Karamesines, “The Greek", took the bump spot and will go up against Langdon in the opening round. Ike Maier, Dom Lagana and Pat Dakin missed the field.

Funny Car driver Tim Wilkerson won his first pole of the season, carrying over his top qualifying effort on Friday of 4.048 at 309.70 mph to top Jack Beckman.

Wilkerson’s no. 1 qualifying effort was the 17th of his career and his first since the 2011 Northwest Nationals at Seattle last August.

"Starting the Countdown with a couple of points and a No. 1 qualifier is a big step in the right direction," Wilkerson said. "You go into the Countdown in 10th place, and there's nowhere to go but up. We're real excited to be here. I told my guys when we started this deal that we need to win two rounds per weekend. All those rounds will add up to where they'll have to contend with us in Pomona."

The Funny Car field had the only shakeup in the top-five during Saturday’s qualifying session, with Ron Caps jumping from 12th to fourth in the opening session with a 4.096 at 308.21 mph. Cruz Pedregon was fifth with a 4.098/299.73

Todd Lesenko claimed the bump spot over Bob Gilbertson, who failed to qualify.

In Pro Stock, Vincent Nobile scored his first-career no. 1 qualifier spot after timing in with a 6.548 at 211.03 mph in Friday’s second session to top last-years event runner-up Jason Line.

“My team and I are ecstatic for our first No. 1," Nobile said. “The car is just running really good. Like I said yesterday and today it performed just as well. Honestly, today we were No. 1 for the first session and Q 4 I actually goofed up a little bit with the burnout, which we might have even been No. 1 for that session as well. We still took the pole position for the weekend, so we’re happy about that and looking forward to tomorrow."

Long-time Pro Stock vet Lewis Worden, in his second start in the Jim Cunningham-owned Ford Mustang, took the bump spot to face Nobile in the opening round. Among the non-qualifiers were John Gaydosh and defending event winner Kurt Johnson.

Andrew Hines retained the top spot in Pro Stock Motorcycle for his second straight no. 1 qualifier and his third of the season.

Only 15 bikes are entered in the field for Sunday’s eliminations, giving Hines a bye in the opening round.

“I have never had a planned bye run in the first round," Hines said. “I’ve had opponents break before staging a couple of times and the starter would walk over and give you the No. 1 finger. To actually know going into tomorrow that we have a bye run is kind of nice. It’s unfortunate for the class that we didn’t have a full field, but to have the chance to learn for a tune-up first round and take a stab at something that we may not try first round on Sunday is going to be beneficial to us."