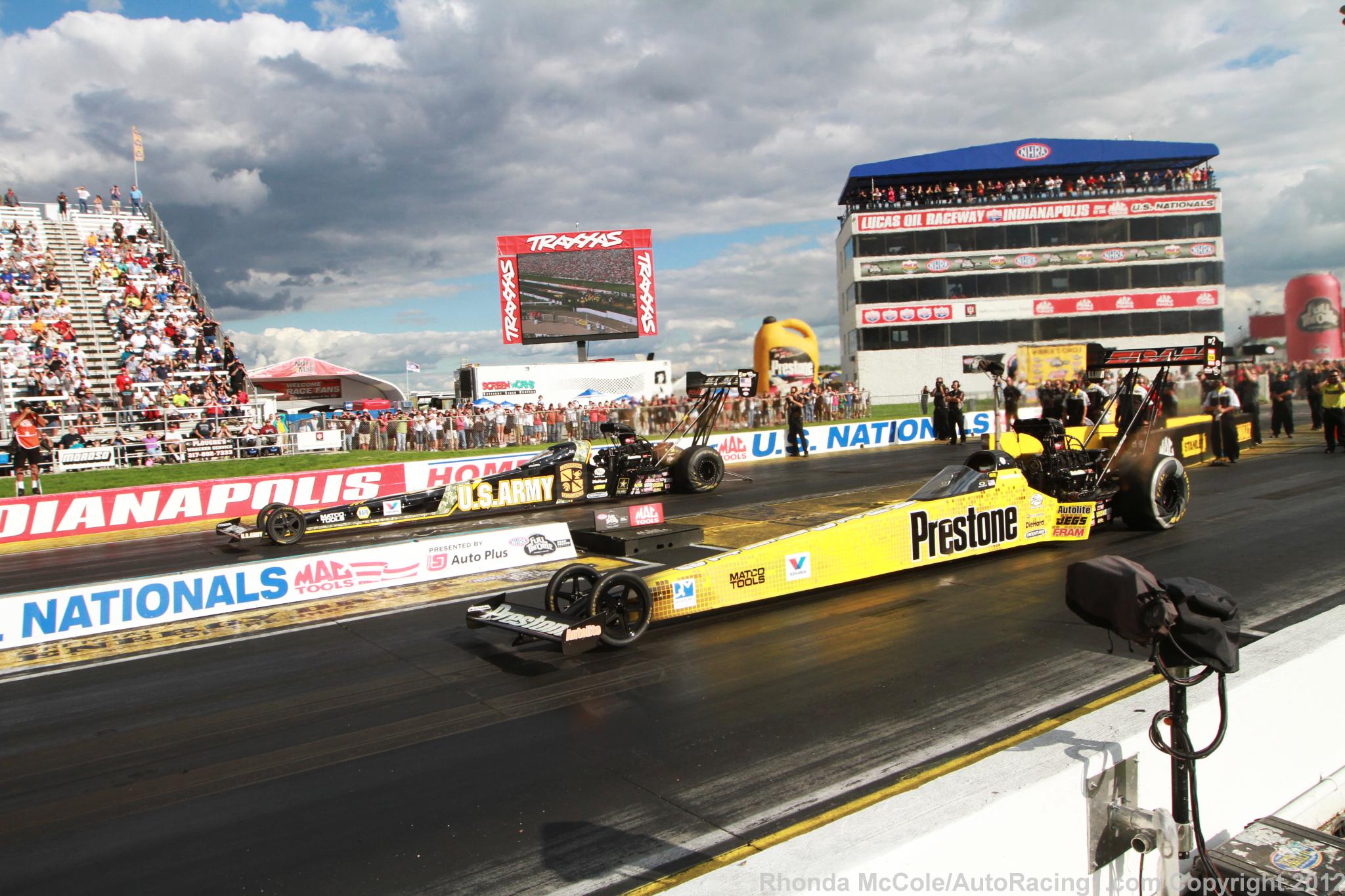 Top Fuel driver Tony Schumacher added his name to the NHRA record books to become the first driver to record nine victories in the historic U.S. Nationals during the 58th running of the Full Throttle Drag Racing Series most prestigious event on Sunday at Lucas Oil Raceway at Indianapolis.

Mike Neff scored the victory in the Funny Car division, while Dave Connolly topped the field in Pro Stock and Andrew Hines swept the weekend in Pro Stock Motorcycle.

The U.S. Nationals marked the final event in the NHRA Full Throttle Series “regular season" with the six-race Countdown to the Championship starting next weekend at zMax Dragway in Concord, N.C. With spots still up for grabs in all four divisions, every round win was critical as sometimes as little as three points meant the difference in making the Countdown.

Having already locked into the Countdown, Schumacher had nothing to lose by pulling out all the stops and it paid off with a victory teammate Spencer Massey in the Top Fuel final to move past “Big Daddy" Don Garlits with most Indy wins all-time with his ninth U.S. Nationals victory.

Schumacher beat out Hilary Will, Morgan Lucas and top-qualifier Shawn Langdon for his second-career final round meet against Massey, who defeated Clay Millican, Khalid alBalooshi and Antron Brown to reach his first U.S. Nationals final.

In the final round, Schumacher beat Massey of the line with a .049 light and lead the entire distance, going 3.806 at 315.34 mph over Massey’s 3.806 at 315.34 to record his second victory of the season and 69th of his career, tying him with Bob Glidden for most Pro category wins.

“It may be sweeter [than the first Indy win]," said Schumacher “Anymore, it’s more difficult to win a race, by far, than it has probably ever been. There was a time where we were a tenth ahead of everybody and just needed to not make any mistakes, but the top seven cars are all so close that it’s pretty gratifying.

“To have a chance to win a ninth against my teammate who was running as good if not better and had lane choice made it a perfect moment. I didn’t feel like I was stellar on the lights, but I left on everybody, Mike Green [crew chief] made the car run fast, and we got the trophy."

Bob Vandergriff Jr. held off Millican and alBalooshi to claim the 10th and final spot in the Countdown in Top Fuel. Antron Brown took the top seed, followed by Massey, Schumacher, Steve Torrence and Doug Kalitta.

Neff eliminated Tony Pedregon and Todd Lesenko before taking down Matt Hagan in the semi, knocking the defending Funny Car champion out of the Countdown.

Meeting each other for the four time in a final round, Neff pulled out the quickest run of the event to chase down Wilkerson, who had a faster reaction time but still came up short at the line with Neff going 4.079 at 311.05 mph over Wilkerson’s 4.079 at 311.05 to collect a Wally for the ninth time in his career.

"This is the U.S. Nationals, and there’s something about it," said Neff. "You know there’s a lot more at stake. You try to tell yourself that it’s just another race, but it’s not. You can’t deny that.

“It’s amazing to me how close everything was to what I went through last year. I didn’t qualify real well last year but felt like we were pretty close. I remember getting up on Monday morning last year just not feeling very good. I was talking to my brother last year, saying, ‘I dunno. We’re really going to have to pull something out of a hat here to do something today.’ We were able to do it both times."

With the runner-up finish, Wilkerson – who entered the U.S. Nationals 12th in points – managed to slide into the 10th spot in points over defending Funny Car Champion Matt Hagan. Ron Capps will go into the Countdown as the number one seed, followed by Robert Hight, Jack Beckman, Neff and Johnny Gray.

Connolly, who also serves as Enders crew chief, made the most out of his just his third start of the season, besting Mike Edwards, Ron Krisher and Vincent Nobile to reach his 40th-career final round.

“I was swinging for the fence because I knew I didn’t stand a chance," said Connolly. “Erica drives incredibly consistent; she’s hard to rattle. She had a .026 [reaction] in the final and that should have been enough for sure. I can’t explain what happened to her. I feel for her. You know, like I said, there was no reason why she shouldn’t have run a 6.55 again and turned on the win light."

Jeg Coughlin raced his way into the final spot in the Countdown, knocking Shane Gray from the field. Allen Johnson, Jason Line, Greg Anderson, Enders and Nobile make up the first five seeds.

Hines, who came in as the no. 1 qualifier, defeated Dawn Minturn, Karen Stoffer and Hector Arana Jr. in the first three rounds to face Arana in the final, where Arana went up in smoke early in the run to hand an easy win to Hines, who ran a 6.937 at 191.70 mph to take his fourth win of the season and 29th of his career.