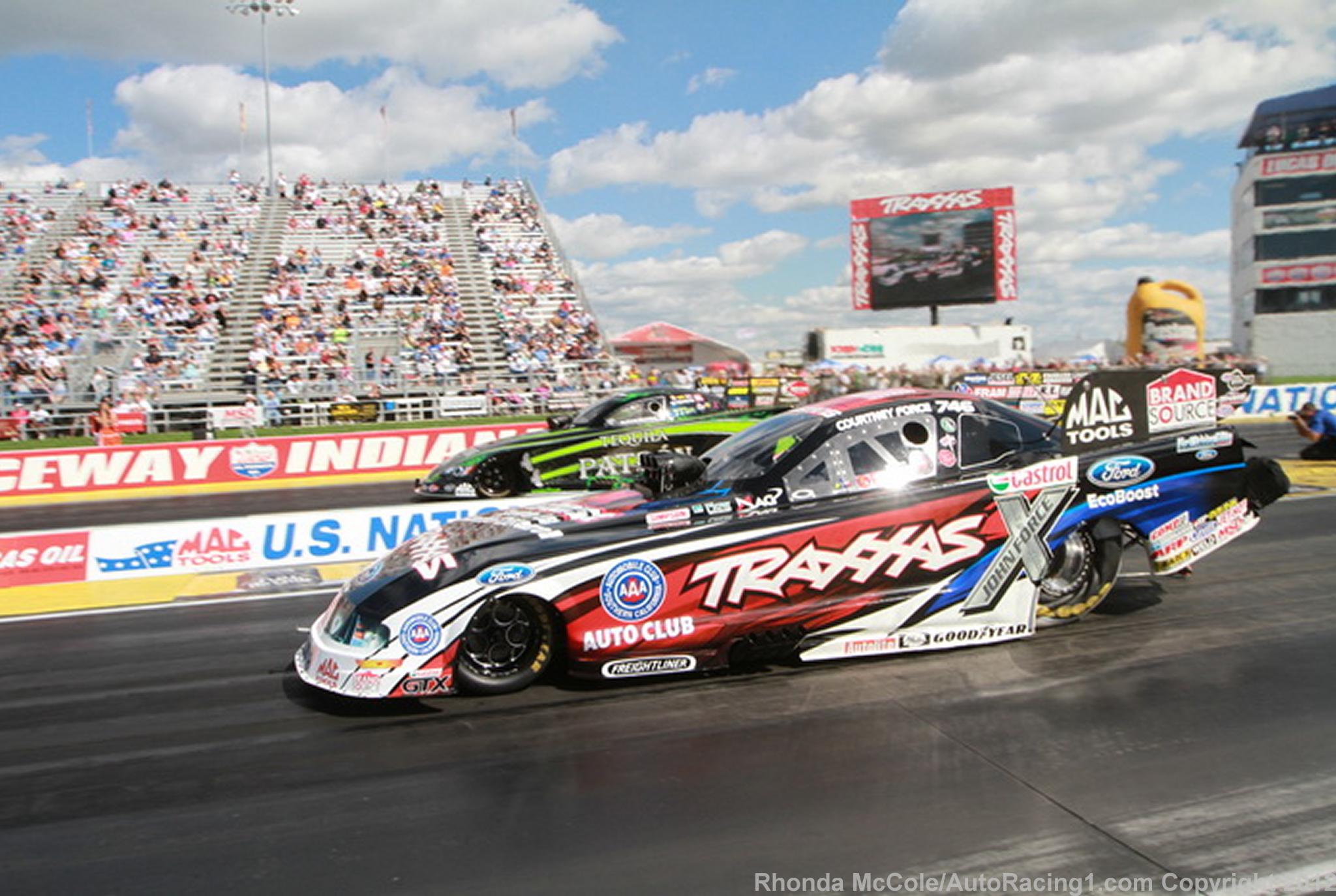 One week after torrential rains from the remains of Hurricane Isaac washed out the 58th annual Mac Tools U.S. Nationals, qualifying resumed at Lucas Oil Raceway at Indianapolis on Saturday with history-making runs by Funny Car driver Courtney Force and Pro Stock driver Erica Enders, who became the first female drivers in NHRA history to qualify no. 1 at the U.S. Nationals.

Shawn Langdon (Top Fuel) and Andrew Hines (Pro Stock Motorcycle) also secured no. 1 qualifier positions during Saturday’s session, which was once again delayed by rain earlier in the day.

Rain had been the story of the week in Indianapolis after severe thunderstorms and flooding around the track last weekend had prompted NHRA officials to cancel qualifying after two rounds had already been run, and then made the decision last Monday to postpone the event and re-open the final two rounds of qualifying.

The decision to re-open qualifying was a welcome relief for many of the top contenders – including Countdown to the Championship contenders Robert Hight and Cruz Pedregon – who would have been bumped from the field in the final race of the regular season.

Courtney Force, who had held the no. 1 qualifying position since last Saturday, stayed atop the ladder after both of today rounds to secure her first career Funny Car pole. Force’s pass of 4.049 seconds at 317.27 mph put her Traxxas Ford Mustang out in front to become the first female Funny Car driver to secure a no. 1 qualifier spot in the U.S. Nationals while also clinching a spot in the Countdown.

“I wanted to take that No. 1 spot," Force said. "It’s Indy – it’s the biggest race of the season. It’s definitely a big deal. I’m so excited to say that I’ve gotten that. We just clinched a spot in the Countdown, and that’s a huge deal. It’s my rookie season, and I didn’t know exactly what to expect. If someone would’ve told me that I’d have a spot in the Countdown and qualified No. 1 for Indy, I don’t know if I would’ve believed them. This season is going better than I could’ve asked for it to be because I have a great team behind me."

Robert Hight managed to race his way back into the field to qualify sixth, while Cruz Pedregon took the 11th position. John Capps held onto the bump spot and will face Courtney Force on the opening round of Sunday’s eliminations.

Over in Pro Stock, Erica Enders added her name to the record book as the first female driver in that division to top the ladder at the U.S. Nationals.

Enders clawed her way back to the no. 1 qualifying spot in the final session after coming in as the provisional pole winner only to drop to fifth as Greg Anderson topped out the opening session.

With her last pass of the day, Enders clocked in with a 6.550 at 210.80 mph to bump Anderson and notch her fifth career no. 1 qualifier spot.

“This is something that we’ve been working so hard on for several years, and it’s finally coming together. I’m so proud of my guys," said Enders. ““I know that this is the biggest and most prestigious race of the year, and it’s definitely got a lot of added pressure, but my team and I have kind of kept our mindsets the same, and the fact that we’ve got to continue to be consistent, carry the momentum, qualify smart and race smart on Sunday because it’s getting to be really, really important

Shawn Langdon turned in the fourth-quickest time in Top Fuel history in the final round to set the track low ET record and take over the no. 1 qualifier spot with a time of 3.740 at 326.48 mph, bumping Spencer Massey from the top spot. It is the third career top qualifier for Langdon and his first at Indy, where he’ll be looking to score his first career Top Fuel victory.

“Winning here would be a great place to start," said Langdon. “We’ve talked about trying to win a race before the Countdown just to get over that hill, and this is obviously the biggest race of the year. To get a win here would not only build confidence, but also set us on the right foot going into Charlotte for the start of the Countdown."

Andrew Hines remained the top qualifier in Pro Stock Motorcycle with a time of 6.861 at 194.86 mph, sweeping all four qualifying sessions to earn his 32nd-career pole and his third straight at the U.S. Nationals.