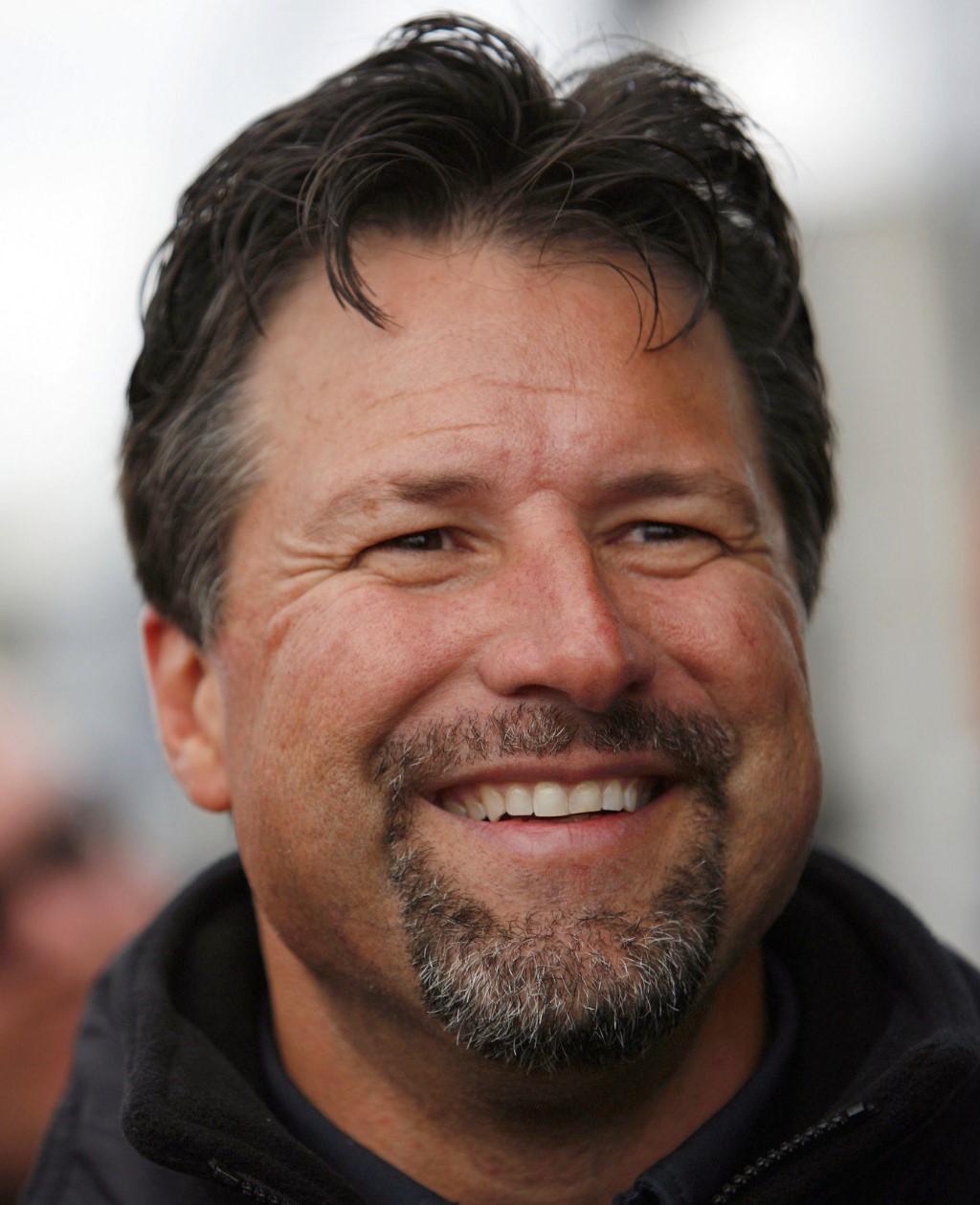 THE MODERATOR: Welcome to today's IndyCar conference call. Our guest today will play a role in next week's IZOD IndyCar Series MAV TV 500 INDYCAR World Championships at Auto Club Speedway. It's Michael Andretti, the owner of Andretti Autosport. Thanks for joining us today, Michael.

Q. Michael, for the first time since 2007, your team is back among the midst of teams battling for the series title. What's been the biggest difference in the team this year from the past few years?

Q. Let's talk about Ryan, a couple years ago he joined your team on a partâ€'time schedule with some backing from IZOD and looking like he would not run past Indianapolis, and he was able to win a couple races. You worked hard to get him in the ride fullâ€'time, and now he's vying for his first series title.

What did you see in Ryan that told you he was capable of running up front and contending for a title?

MICHAEL ANDRETTI: The thing about Ryan is he's an allâ€'around racer and he can race on all different types of tracks, so that was really important, especially the way the series is today.

Also, another important part is, you know, he's a real team player. He's all about the team, whatever the team needs to do, and work together with the teams; and he knows that if that happens, everybody works as a team, you then get the result.

You know, those are the things that we looked at and that we liked about Ryan.

Q. In addition to the overall series title, Ryan is also in the running for the AJ Foyt Trophy as the top oval driver in the series. Knowing that you guys are chasing two titles next weekend at Fontana, does that change the way you're going to approach the race or maybe call the race?

MICHAEL ANDRETTI: Yeah, great, it came off really well. We were all proud of the way it came off. It was quite an undertaking, I can tell you; to do it in less than a hundred days, it was quite a â€'â€' you know, it was almost a miracle. And it all comes down to the team that we put together. We have really, really good people working that thing.

Q. Where is Ryan at in terms of your engine cycle this year? Will you contemplate an engine change for Fontana as a safety measure?

MICHAEL ANDRETTI: Yeah, we are looking at that. We have a couple tests and we are going to see how many miles we get on the engines at the tests. There's a chance that we might have to take a penalty but we don't know yet for sure.

Q. It was looking pretty bleak for Ryan after Sonoma, going into the race with knowing Will could clinch and Ryan would have to have a pretty strong race; were you at any point â€'â€' I don't want to say resigned, obviously not given up, but did you think it was too big of an undertaking to accomplish?

MICHAEL ANDRETTI: Not really. You know, the problem that happened in Sonoma was we lost control of our own destiny, really; at that point we needed help.

We got a little bit of help this weekend, whereas we got lucky, we pulled a good strategy and we put will in the middle of the pack and we were able to gain a ton of points. And so that was the most frustrating part, you know, is when you lose that control.

Q. How do you picture yourselves now? What kind of race do you need and do you think you guys are in control of your own destiny?

MICHAEL ANDRETTI: Well, we are a little bit but you know, the thing is now, all Will has to do is finish right behind us and he wins, so he's going to be racing behind us in that way. If we are running third, all he has to do is finish fourth, and he's fine; whereas, we have to go for the win and hope that we have some help with a couple guys between us. I think he has to finish fourth or worse â€'â€' I didn't really look at it yet. We are still going to need to have a really good race and we are going to need him to have just an average race.

Q. I was talking to Sebastian Saavedra, pretty well spoken, and he was unaware that it was a night event. How are you going to prepare for 500 miles â€'â€'

MICHAEL ANDRETTI: He'll be fine. He's driven night races before. He's driven twoâ€'mile racetracks. He just has not done it, I don't think, with â€'â€' well, maybe he hasn't driven a twoâ€'miler now that I think about it. I was trying to think if he drove one in Indy Lights; I'm not sure.

He'll be fine. I don't think he will have in problems. The good thing is he'll have three teammates to help him, as well, that's a big deal so he'll be okay.

Q. You're not worried about being stretched too thin at that event?

MICHAEL ANDRETTI: No. We have been able to do that with no problems. In fact, there's been times where it's helped us. Even at Sonoma there were a few things that Sebastian found in practice that actually helped the other guys. Having more cars out there helps and we have great people and his team â€'â€' it's not taking away from the other three teams.

Q. I know Ryan has been a free agent this year. Are you hoping to have something locked up or is it pure focus on just getting into the championship and seeing what happens from there?

MICHAEL ANDRETTI: We are hoping. We have been real close. Obviously it comes down to time between sponsors and all that, and we are getting real close to having it all locked down. I feel very confident that Ryan is going to be with us.

MICHAEL ANDRETTI: Well for us as a team, the last time we were there we won, if I remember correctly, I think it was Tony and Dario were up front, if I remember. Obviously that's a fond memory. You know, I ran well there as a driver, as well. Should have won there in 2000, but unfortunately you know, the red flag came out with three laps to go and everybody got beat on the restart by Vasser.

But it's a good track. It's a great track. It's basically a sister to Michigan, and Michigan always has great races, as well. It's going to be good, especially with the rules package that we are coming there with. I think it's going to be similar to a race that we had in Texas, which I think was a great race. I think everybody is looking forward to it.

Q. Secondly there's been talk about the revival of the Triple Crown in 2013. What are your thoughts about that, and do you think that that's a good idea?

MICHAEL ANDRETTI: I think it's a great idea. I think it would be fantastic. Especially if they were to put out a huge prize if you were to win all three; and then if you win two of the three, that you get a big prize, as well. If they were able to come up with some sort of thing like that, I think would be great for the series to promote. So, you know, yeah, I'm behind it for sure.

Q. What's it been like calling race strategy for Ryan this year compared to some of the other drivers you've dealt with in the past, including Marco and some of your other drivers?

MICHAEL ANDRETTI: Actually it's been really good. I think we really have connected really well. I think that whole pit stand with the guys that are on it, I think we all work together really well.

You know, you always talk about chemistry, and I think we have the chemistry going on that stand, and Ryan's part of it and it's been really good. Whereas in the past, some of the other places, it just wasn't working with me being there, and so, you know, we made changes. And it also has to do with other people there that just didn't â€'â€' the chemistry wasn't working.

So constantly you're working on those things to try to make those pit stands work. Right now, ours is working really well.

Q. Would you say that you've mellowed in your approach?

Q. As we get close to the end of the season, I would like your thoughts on the state of Indy car racing, if you can sum up where the series is at and the job Randy is doing?

MICHAEL ANDRETTI: I think we have a lot going for us. First off is the product on the racetrack. I think it's the best racing product out there in the world. I mean, it's hard to argue it.

Q. What kind of job do you think Randy (Bernard) has been doing?

THE MODERATOR: We thank you for your time and wish you and Ryan Hunterâ€'Reay the best of luck next week in Fontana.