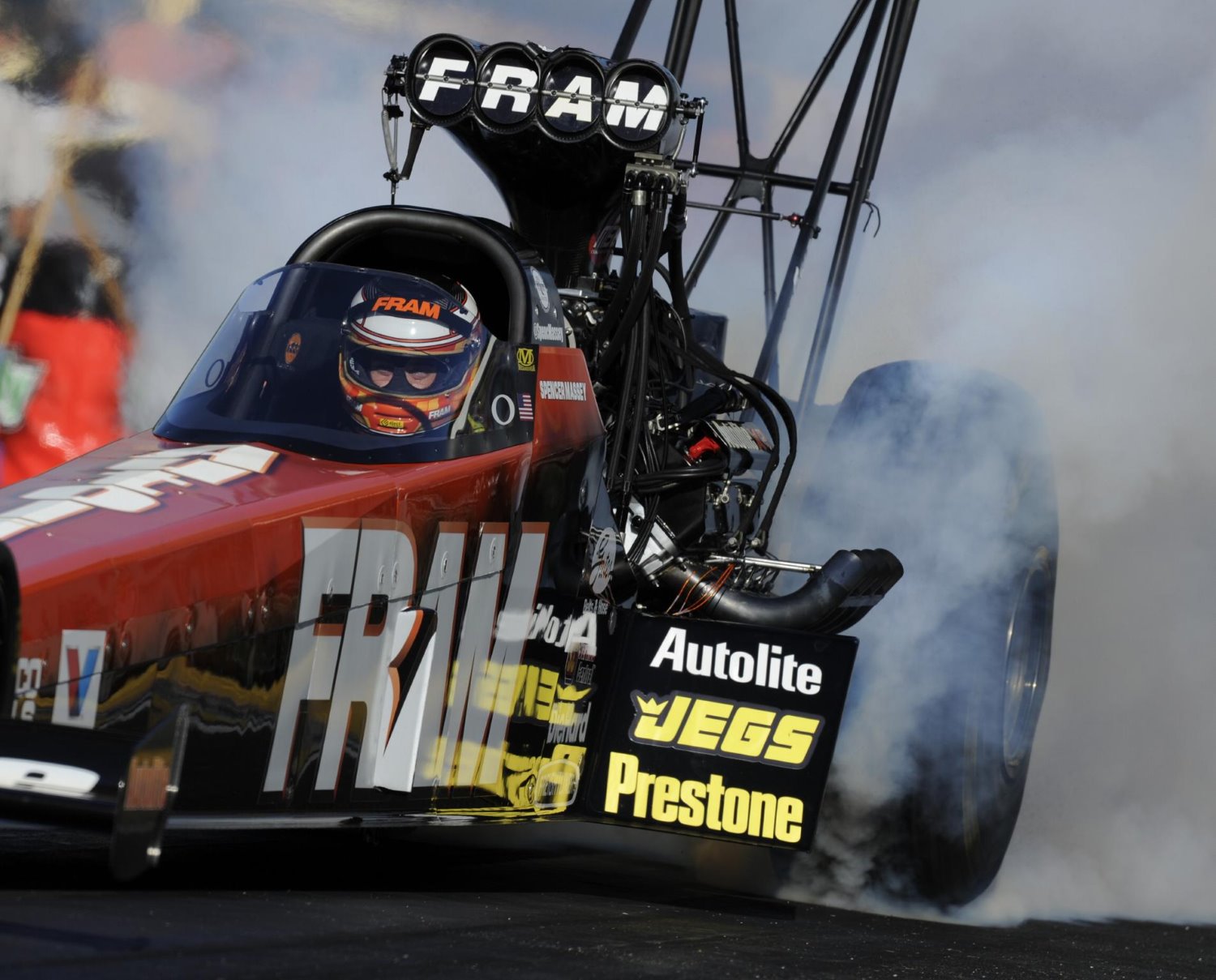 Johnson powered his Mopar Dodge Avenger to the No. 1 position with his 6.554 second pass at 211.66 mph Friday evening. He earned the maximum amount of qualifying bonus points during the Western Swing by making the quickest run of every qualifying round since the Denver event.

"It was warm today and we hurt a motor early, but in the fourth qualifying session we went out there and ran well so I think we have a good race day tune-up for the hot track tomorrow," Johnson said. "I thought we'd run a little better and we missed the tune-up a little bit, but we were still able to go low of the round. This Hemi is running awesome."

Not only has Johnson secured the No. 1 qualifying position for the past six races, he's also won the first two stops of the Western Swing in Denver and Sonoma and has his sights on becoming just the eighth driver to even sweep the elusive Western Swing.

"Anytime you can put your name in the record books of any kind is awesome," Johnson said. "The Western Swing has some sort of aura about it, so it would be great to become the eighth guy to ever sweep the Swing but we'll see what happens tomorrow."

Johnson isn't the only one who hopes to add their name to the record books during eliminations Sunday. Top Fuel driver Antron Brown also has a shot to become the first driver to ever sweep the Western Swing twice.

"We've had a great Western Swing so far no matter what happens Sunday," Brown said. "My Matco boys have been killing it out here, they've been digging deep. You have to dig deep just to even win one race out here, let alone try and sweep the Swing. I know I have a great race car behind me. Tomorrow is going to be a tough, hot day so we just have to take it one round at a time."

Brown's DSR teammate Massey earned the No. 1 spot in Top Fuel thanks to his Friday evening qualifying session when his Top Fuel dragster laid down a 3.837 second pass at 319.60 mph.

"Our goal in qualifying was to get data for raceday and we ran great Friday and ran pretty good in the heat today," Massey said. "The conditions should be about the same tomorrow and we have a race car that can get down the hot track so I think we're ready for raceday."

The 29-year old driver, who is also the point leader in Top Fuel, has never won at Pacific Raceways but is hoping that will change tomorrow. Massey will face Washington-native Ron Smith in the opening round of eliminations Sunday.

In Funny Car, Capps also maintained the top spot in his NAPA Auto Parts Dodge Charger thanks to his 4.119 second pass at 298.47 mph during the second qualifying session Friday, which held up as the quickest Funny Car pass of qualifying.

"Being number one is always nice but you can never take anyone for granted on race day," Capps said. "Anything can happen, but I've had great mojo here in the past and I'm hoping that continues."

The veteran driver loves coming to Pacific Raceways thanks to all of the success he's had at this track throughout his 17-year driving career. It is the home of his first career win back in 1995, and he has two other wins here in seven final-round appearances.

"I feel good," Capps said. "I've been here as the 14th or 15th qualifier and won from the bottom before so I know we can win from any position here. We got down the track today on the hot track so we'll sleep good tonight, and I'll be on my game tomorrow."