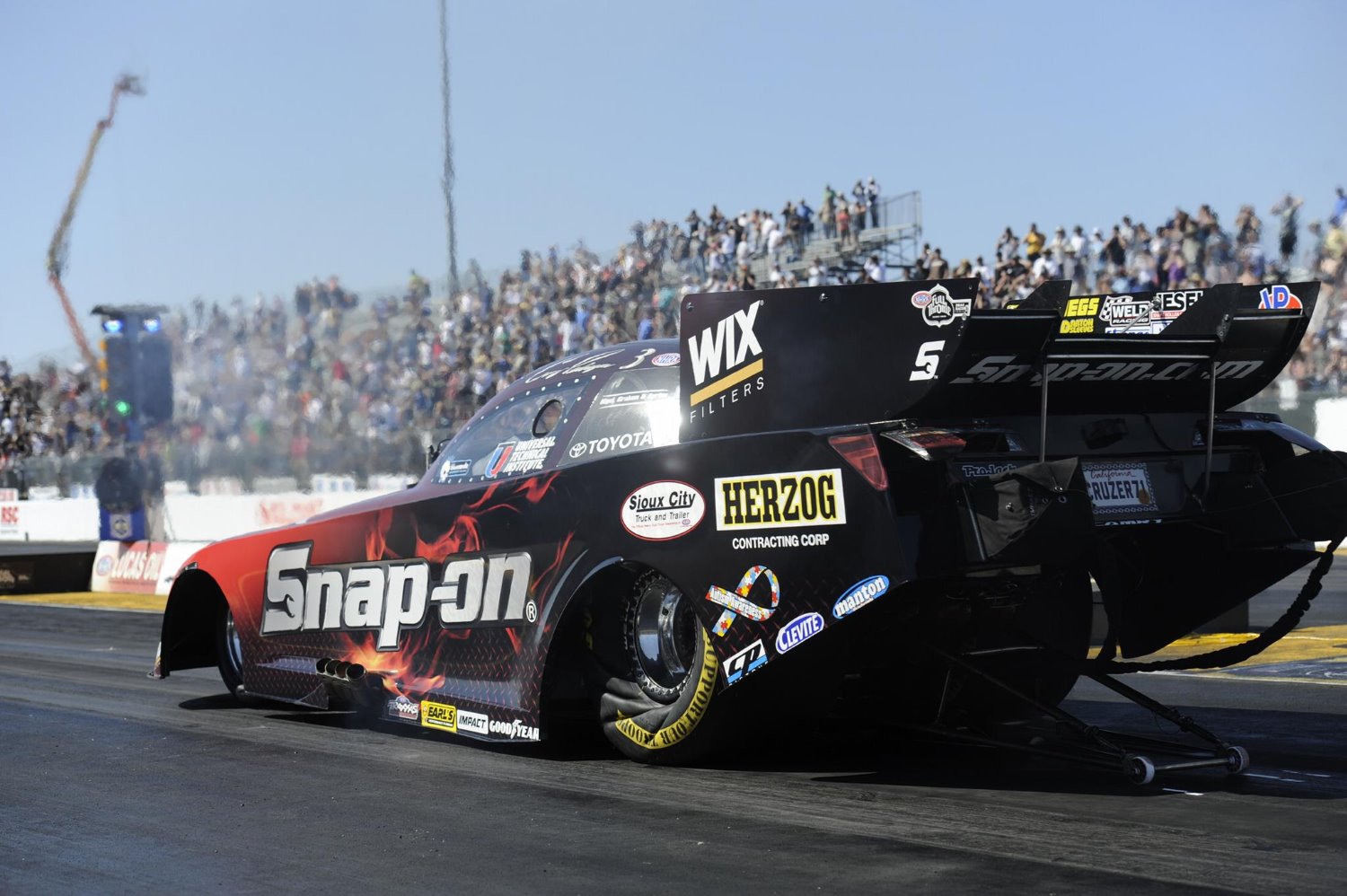 Cruz Pedregon raced to his fourth No. 1 qualifying position of the season in Funny Car Saturday at the NHRA Sonoma Nationals.

No one was able to improve on Pedregon’s track record time of 4.028 seconds at 307.30 mph from Friday’s evening session. It was the 49th No. 1 of Pedregon’s career and his first No. 1 at Sonoma. More importantly, it puts the two-time world champion in a position to grab his first victory of the season. He hasn’t won since Dallas last September.

“I feel good about our chances tomorrow," Pedregon said. “That’s a great accomplishment to get 49 No. 1s. I am proud of that. What I am not proud of is our record this season on race day. I am hoping we can get that turned around. I feel like tomorrow is going to be a crucial day to continue our march to lock up a spot in the Countdown. That’s really our goal at this point."

A two-time winner at Sonoma, the driver of the Snap-on Tools Toyota Camry will face Jeff Diehl in the first round.

Kalitta’s track record performance of 3.785 at 321.65 from Friday also held, giving the veteran Top Fuel driver his first No. 1 qualifying position since Brainerd 2010 and the 31st of his career. He will face Scott Palmer in the opening round as the driver of the Technicoat dragster goes for a category-best sixth victory at the Northern California track.

“I am real proud of Jim (Oberhofer, crew chief) and the guys," Kalitta said. “They’re re all working real hard. This Western Swing is something we all look forward to every year so we’ll hope for the best."

Kalitta’s teammate, David Grubnic, is second overall with a 3.790 at 318.02 in the Optima Batteries dragster. The last time the pair were one-two in qualifying at Sonoma was 2004 and they eventually met in the final round.

“That’s pretty cool seeing Dave and I toward the front of the pack here," said Kalitta, who hasn’t won a race since Denver 2010. “There’s definitely some tough competition out here this weekend with a lot of good times. We are going to have to be on our game tomorrow to get the win. Hopefully we’ll have a bunch of 3.80s for them tomorrow. The car is running good. It’s been a while (since we've won) and it looks like a pretty good opportunity for us tomorrow, so we’ll see how it goes."

In Pro Stock, Johnson powered his Team Mopar Dodge Avenger to a track record time of 6.517 seconds at 212.09 to earn his fifth No. 1 qualifying position in a row and his third consecutive top qualifying effort at Sonoma. Johnson, who will face Matt Hartford in the first round, has a category-best eight No. 1s this season and 26 in his career.

“This feels awesome," Johnson said. “I think we dialed it in better today. The Mopar Dodge Avenger ran great and to qualify No. 1 for the fifth straight time is unbelievable. This morning’s run we hit it pretty good but we still may have a left a little bit out there. We are so strong right now that we can make a mediocre run and still be right there at the top. When we make a really good run we’ve got a little bit of an advantage. That really gives us confidence going into tomorrow."

Krawiec set both ends of the Pro Stock Motorcycle track record to claim his third No. 1 of the season and 12th of his career. His run of 6.801 at 198.35 on his Screamin’ Eagle Vance & Hines Harley-Davidson from Friday put him into position to earn his fifth win of the season. He will race Angie Smith in the opening round.

“I am glad we got it done on that first lap (on Friday)," Krawiec said. “We were too aggressive on that first session today and we shook. We were trying to go fast. We had a tailwind and everything was right to go fast. We had great conditions. Overall it was probably the best of the weekend. Unfortunately we missed the tune-up just a smidge. Our last run we just focused on race day tune-up."