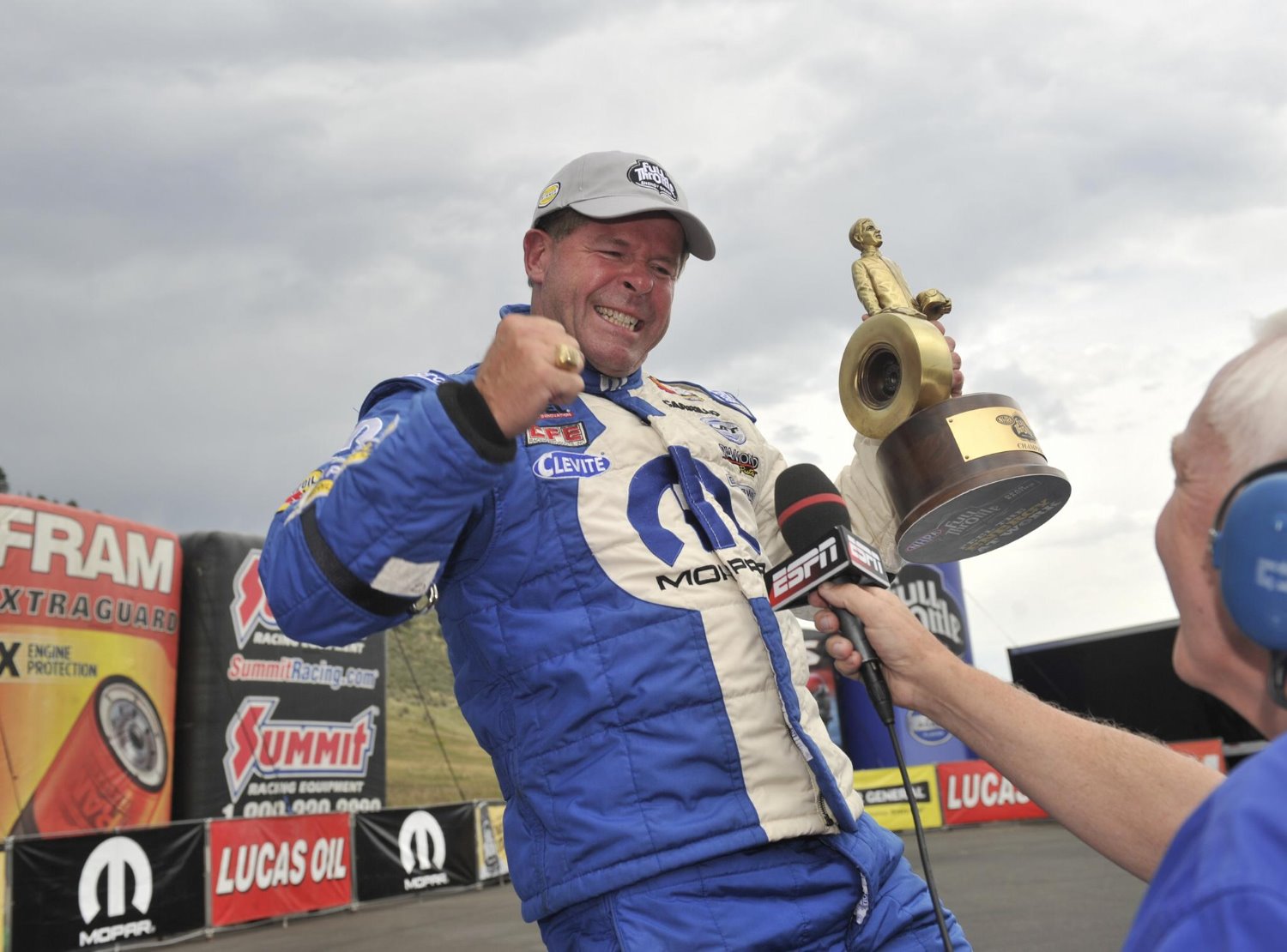 Johnson driving his Team Mopar Dodge Avenger defeated V. Gaines in the final round with a winning run of 6.951 seconds at 197.31 mph. Local favorite Gaines trailed with a performance of 7.144 at 160.35 in his Kendall Oil Avenger. Johnson was the No. 1 qualifier, set a new track record for elapsed time and was able to set the overall top speed and elapsed time during the event. It was his sixth consecutive career final round appearance at the track.

“My quote is going to be that ‘practice makes perfect’ as we came up here and tested and developed a combination that’s just bad to the bone," Johnson said. “We want to do well in front of our Mopar contingent, my bosses, and the people that sign those checks at the end of the year. This year was extra special because it was the 75th anniversary for Mopar. We really, really wanted to win this race so that we could hand them the Wally (trophy)."

With the win Johnson takes over the category points lead from Greg Anderson, who had held the lead since the first race of the season.

In Top Fuel, Brown defeated Brandon Bernstein who continues his winless drought. Brown had a winning pass of 3.957 seconds at 308.21 in his Matco Tools dragster to edge Bernstein’s MAV TV dragster, which trailed at the finish line with a 3.959 at 307.58. With the victory, Brown moves into second in the points standings, 11 behind teammate Spencer Massey. Brown is the most recent driver to sweep the Western Swing, in 2009, and hopes this is the first step in repeating that feat.

"When you come out here on ‘The Mountain,’ you have to tune it up on the racetrack and keep it living," Brown said. "We lived all four rounds today, and that’s a good start for the Western Swing. You come out here with a win, and it sets the pace and gives our boys some motivation for when we go out there in Sonoma. We go up there and dig deep because of the competition in this class. We really want to go into the Countdown in the top three, but would love to get that number one spot and get the extra 20 points. We just want to keep on rolling and rolling."

Massey, who was defeated by Bernstein in the semi-finals, became the first Top Fuel driver to earn a position in the Countdown to the Championship.

In Funny Car, Beckman powered his Valvoline NextGen Dodge Charger to his second win of the year when he defeated rookie driver Courtney Force with a run of 4.277 seconds at 293.79 seconds to the losing run of 4.289 at 283.49 in Force’s Traxxas Ford Mustang. This is also his second win at Bandimere Speedway in three final round appearances.

"At the end of the day, we took the race car that qualified No. 1 and got it down the race track on every single pass," Beckman said. “We weren’t perfect today — we dropped a hole on our semifinal run and had two people red-light against us — but I like to think that we forced some of the other cars to try to beat us, and that’s why we got the win lights. To win in nitro Funny Car in any one season is hard to do. To already have two at just past the midpoint of the season, I think we put a stamp on it that says this team is going to contend for the rest of the year."

Krawiec rode his Screamin’ Eagle Vance & Hines Harley-Davidson to the win over his teammate Andrew Hines in the final when Hines fouled out, handing the win to Krawiec. This was the fourth win in four final round appearances for Krawiec. It also marked the seventh time a Harley-Davidson was featured in the final round and the team’s seventh consecutive win this season.

“Talk about a dream season, we never expected it to go like this," Krawiec said. “You know, to be 100 percent honest with you, this race shouldn’t have been ours this weekend. Not that you should always count yourself out, but we were a little down on ourselves as a team, we were struggling on Friday and Saturday. It really sucks when you’re that far behind. For us, we just dug hard and went after it."

By reaching the second round of eliminations Hines joined Krawiec as Countdown to the Championship qualifiers.